For a long time, I felt that pancakes were a dish best left to professionals.

Certainly, a pancake recipe from a premade mix has a place of honor in the culinary world, like PopTarts or instant ramen. But at brunch in actual restaurants, the pancakes are so unforgettably good—so thick and cakelike, but dreamily light. Attempting to re-create them at home felt as foolish as attempting to dye my hair Emma Stone auburn with a red Sharpie.

But going to brunch—home of the non-box-made pancakes—is a polarizing activity. At best it is a festival of food, alcohol, and hanging out, the closest thing to a feast that modern times can offer. At worst it is an expensive Dante’s Inferno, with various levels of hell including 50-minute lines, your friend’s boyfriend explaining his terrible politics over cold eggs, and paying $63 for an omelet and a weak mimosa.

(If you’re interested, I’ve discovered that the only way to enjoy brunch is: Sleep in. Eat a full breakfast. Go to a restaurant, and put your name on the list. Leave and go to a nearby coffee shop, order a pastry and a coffee, and eat it with your friends until it is time to go back to the restaurant. Enjoy brunch. Go home and take a nap—you’ve had a busy day.)

Of course, now restaurants are either closed, pickup or delivery, or tentatively opening at 50% capacity, and pancakes don’t travel well in foam takeout boxes. So I—an amateur—have been forced to attempt the brunch of my dreams at home, with help and advice from my older and wiser sister. (She is the kind of person who gets up at dawn to make two kinds of homemade pasta, which I can’t relate to but do appreciate.)

She maintains she found the trick for perfect pancakes in a recipe from Neil Kleinberg, the chef behind New York City’s legendary Clinton Street Baking Co. restaurant, where I have in fact stood in a 110-minute line for pancakes. Using Kleinberg’s approach, she made pancakes that looked and tasted as if they’d come from a tiny coastal bed-and-breakfast staffed by a short-tempered but kind-hearted chef with a mysterious past.

The trick works in all recipes, from the most complicated to the most straightforward. We like to use it in this simple old-fashioned pancake recipe from All Recipes, which is delicious and does not call for “advanced” ingredients or equipment fancier than some bowls and a spoon. But you can use whatever basic pancake recipe is your favorite.

You sift together the dry ingredients (I don’t have a sifter, so I halfheartedly pour some of the flour through a metal sieve and stir it vaguely). You separate the egg whites from the yolks ((it's not as hard as you fear) and put the yolks, milk, and melted butter in the “well” (read “hole”) in the middle of the dry ingredients. Then you mix it up.

Here comes Kleinberg’s trick, which is what makes the pancakes taste professional: In a separate bowl, whip the egg whites with an electric mixer or fork until they turn opaque and form peaks. Then fold the whipped whites into the batter. (I was very alarmed by folding, which sounds technical and possibly French, but it’s just horizontal stirring!) This whole pouring/stirring/whipping process takes less than five minutes. 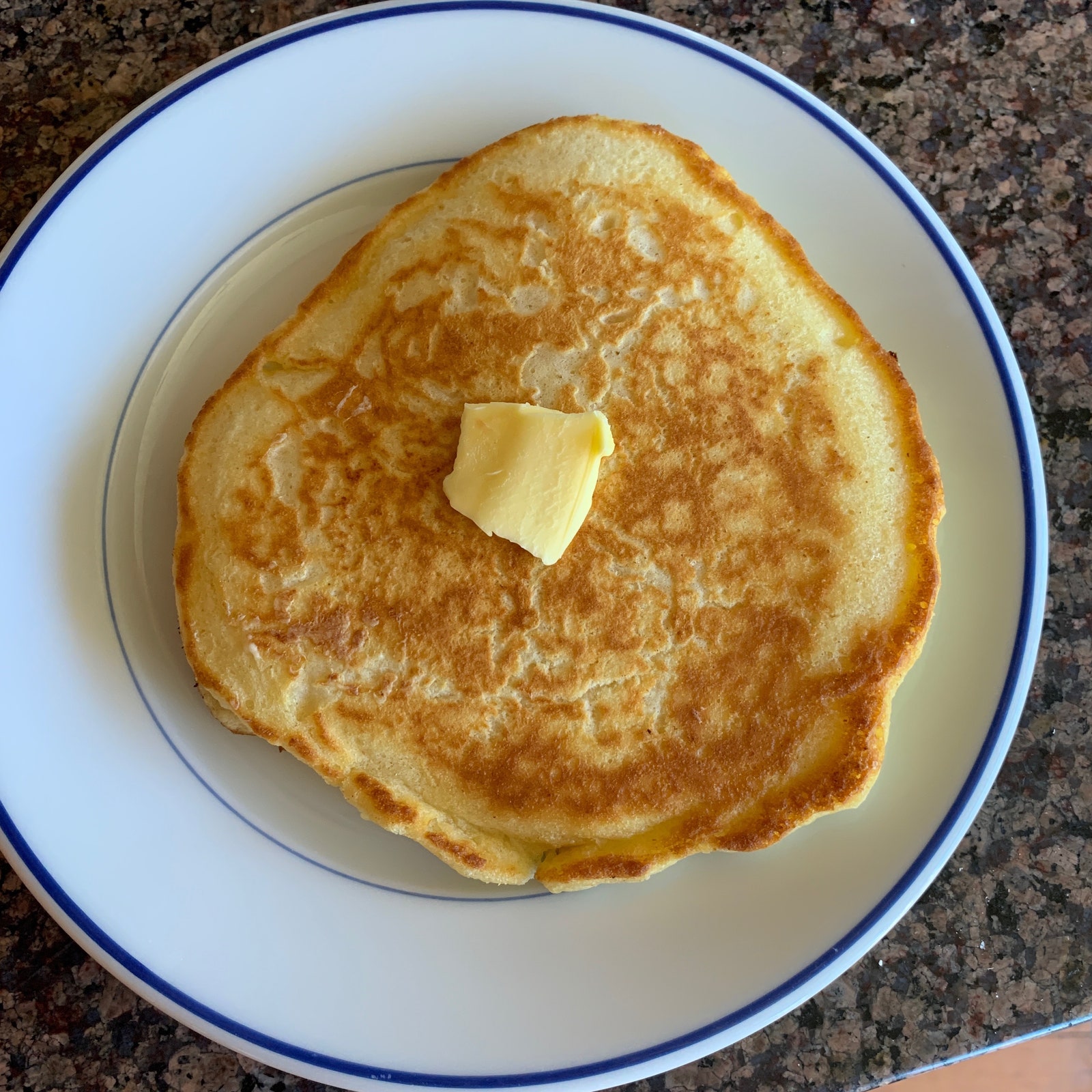 Cook them on a hot pan with butter and eat them immediately. Add in chocolate chips, blueberries, or chopped walnuts and brown sugar if you feel like it. Make them into TikTok-popular pancake cereal or a gigantic sandwich, or serve them as part of a trendy pancake charcuterie board, with strawberries and Nutella and lemon curd.

Or eat them plain, hot out of the pan, and as they melt on your tongue, remember we will be together again soon, eating, laughing, having brunch with our friends.

Just don’t forget to bring two to three pastries before you get in line.