Leaders of the nation's major media companies will argue proposed laws to force tech giants Google and Facebook to pay for news content they have used for free to build their businesses are critical to the survival of Australian journalism.

Executives from Nine Entertainment and News Corp Australia are expected to mount similar arguments on Friday before the Senate economics committee, which is scrutinising the Morrison government's proposed media bargaining code bill. 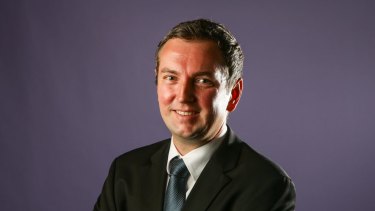 Nine’s Chris Janz pointed to Google’s recent decision to “experiment” by temporarily removing Australian news content in search results for some users as an example of its market power.Credit:Dallas Kilponen

The code aims to force digital platforms to pay media companies for news content, and follows a 12-month review into Google and Facebook by the competition watchdog. The legislation, which was introduced into the House of Representatives in December, comes amid a push by global governments to rein in the power of digital monopolies.

Nine's chief digital and publishing officer, Chris Janz, who will give evidence to the Senate hearing as part of panel featuring representatives from News Corp, Guardian Australia and Australian Associated Press, said time was "clearly running out" to regulate the digital platforms.

"Without an effective code, there simply won't be the money to employ the journalists we have working in Australian media companies today," Mr Janz said.

"They built the services they have today off the back of our content. If they hadn't had unfettered and free access to our content, they would not have become the monopolies they are today."

Nine owns The Sydney Morning Herald and The Age.

Mr Janz pointed to Google's recent decision to temporarily remove Australian news content in search results for some users – a move the platform described as an “experiment” – as an example of its market power.

"They effectively wiped local news off the face of the internet with one decision made out of California. They have power and they are not afraid to use it."

A News Corp Australia spokesman said the company would continue to "strongly support the introduction of the code" at Friday's hearing, but declined to comment further.

Guardian Australia managing director Dan Stinton said the concept of the internet as an open, competitive economy had instead become dominated by a small number of very large US tech companies.

"Where people go online is largely determined by these two companies’ algorithms, which remain opaque despite their central role in the news and information people see, as well as the digital economy," Mr Stinton said.

Executives from Google and Facebook will also give evidence at the hearing, where they will argue against the code's implementation.

The inquiry will also hear from representatives from Free TV Australia, the ABC and SBS, and the Australian Competition and Consumer Commission.

Treasurer Josh Frydenberg introduced the bill to legislate the code during the final sitting week of Parliament last year, with a vote expected early this year after the committee delivers its report on February 12.

The code requires Google and Facebook to enter mandatory arbitration with media companies if they cannot reach agreement over the value of their content within three months.

It also requires the platforms to give the news businesses 14 days' notice of algorithm changes, and non-discrimination provisions have been put in place to stop the tech giants taking retaliatory action such as removing content or punishing organisations that participate in the code.

While the major media companies strongly support the code, some smaller outlets have raised concerns.

Country Press Australia, which represents more than 160 regional and local newspapers, said in its submission to the inquiry the code was "weighted to large media organisations", highlighting the requirement for publishers to turn over $150,000 annually to participate.

Junkee Media, which runs youth-orientated websites Junkee, Punkee and AWOL, said in its submission it was "heavily reliant" on Facebook and Google to "drive traffic and revenue" to its sites.

"Crucially, any moves by the two companies to abandon the Australian marketplace would have an outsized impact on smaller digital publishers, who for years have been encouraged to invest more in these platforms," it said.

Both Google and Facebook have claimed the code's implementation could force them to limit or change their services in Australia.

Google has argued the code would force it to pay publishers for providing links to news articles that appear in Google Search, a move it claims "would destroy the business model of any search engine".

Facebook has declared the code "unworkable", with the company's Australian managing director, Will Easton, breaking his silence on the proposed laws in a blog post on Thursday.

"No other business is forced into a highly uncertain binding arbitration process where the government decides who enters these agreements and forces payment from the provider of a free service," he said.