The Bachelor alumna had fans buzzing on Monday after she posted a photo of herself on Instagram and listed the location as Arlington, Iowa, which is where Soules lives.

“Farm life,” she captioned the snapshot.

This wasn’t the first time Fuller had hinted she was hanging out with the season 19 star. Last week, the medical sales representative posted a picture of the sun rising over a field. Social media sleuths then noticed that the farmer shared similar footage of a field being plowed in the morning.

“(EXCLUSIVE): One of the more random Bachelor ‘couples’ that I can’t say I ever would’ve guessed,” the message read. “I don’t know how long this has been going on or how serious it is, but I can confirm that Victoria Fuller is currently together in Iowa for the week with Chris Soules. Discuss.”

Us Weekly also reported that the reality TV celebs started spending time together after connecting on social media.

“Chris slid into Victoria’s DMs,” a source told the outlet. “He apparently DMs a lot of people.”

Although, neither Fuller nor Soules has directly commented on the reports.

As fans will recall, Soules appeared on Andi Dorfman‘s season of The Bachelorette. He then went on to hand out the roses as The Bachelor and ended up proposing to Whitney Bischoff. However, they ended their engagement shortly after the show.

In 2017, Soules was arrested following a car crash in Iowa. The Iowa State Patrol told E! News at the time that Soules was driving the pickup truck that rear-ended Kenneth Mosher‘s tractor trailer. The former Dancing With the Stars contestant was accused of leaving the scene of the accident prior to law enforcement’s arrival and was arrested at his home. Mosher was taken to a nearby hospital, where he was pronounced dead.

Soules entered a conditional guilty plea to leaving the scene of the accident resulting in serious injury in 2018. In 2019, he accepted a suspended two-year prison sentence to serve two years on probation. In addition, he reached a $2.5 million settlement with the victim’s family.

“There is not a day that goes by that I don’t wish I could have done more or change the outcome of what happened,” Soules told People in 2019 in regard to the accident. “My outlook on life has changed forever.” 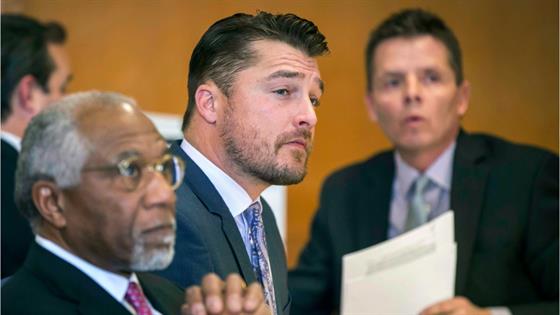 As for Fuller, fans met her on Peter Weber‘s season of The Bachelor. She was one of the final three women vying for his heart; however, she was sent home after the fantasy suite dates. She later came under fire after photos of her modeling in a campaign for an apparent marlin conservation group that used the phrasing “White Lives Matter” resurfaced on the internet. Fuller issued an apology.