Be Your Own Model, which lets customers use their own photos to better visualize how the company's clothing will look on them, "creates a gamification of shopping that we believe will be very compelling to the customer," Walmart said.

The feature, which utilizes the Zeekit virtual try-on platform, is being rolled out to iOS users of the Walmart app, and it currently works for over 270,000 women's apparel items, according to the Arkansas-based retailer.

"With Be Your Own Model, a customer sees an ultra-realistic simulation with shadows, fabric draping and where clothing falls on their figure in seconds," the company said.

The new feature comes as the nation's largest retailer, like its competitors, has been offering a slew of discounts to get rid of excess inventory.

The feature is also a way to capitalize on the anticipated surge in demand for online shopping during the holiday season.

Nick Handrinos, vice chair at Deloitte, said in a recent holiday sales forecast that higher costs are expected to drive a surge in e-commerce sales as more consumers seek out deals online "to maximize their spending."

The company says an earlier version of the feature, Choose My Model, that was launched earlier this year "was met with terrific customer response." The feature let customers pick out a model that resembles them to try on an item.

Walmart claims that the newest upgrade is the "most realistic application" on the market. The company also touted that it's the first to offer a virtual try-on experience for apparel brands at scale. 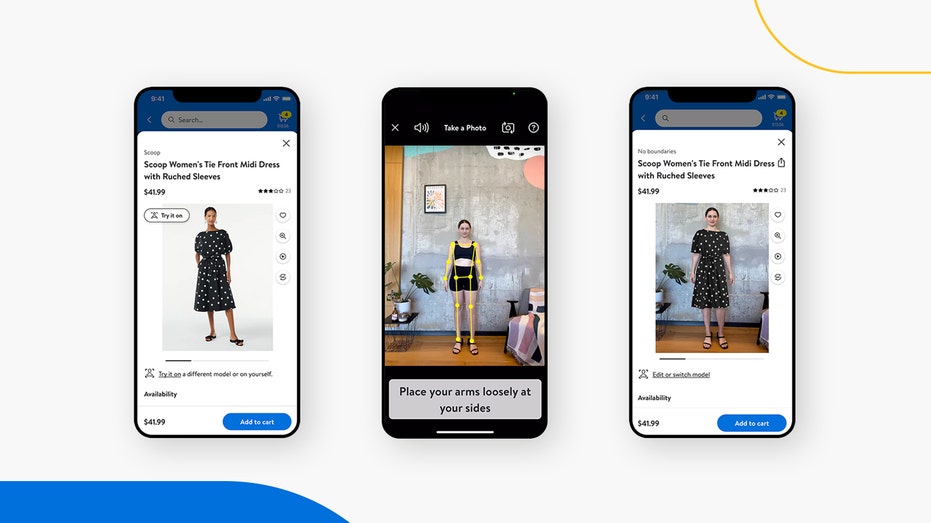 To use the feature, customers will be prompted to take a picture of themselves within the Walmart iOS app. When their image is uploaded and saved, users will be able to view themselves as the model during each use.

Walmart also plans to roll out the feature for Android devices in the coming weeks.