CRISTIANO RONALDO lashed out at Ireland's Dara O'Shea before missing a penalty for Portugal.

And the Manchester United superstar's actions prompted Irish fans to question whether he deserved to stay on the pitch. 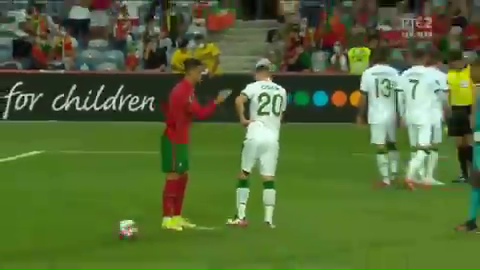 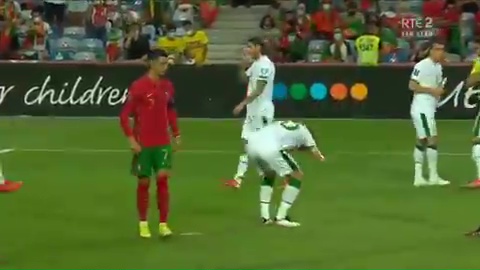 And Ronaldo grabbed the ball before an agonising wait for VAR to confirm the foul at Estadio Algarve.

However, Republic of Ireland defender O'Shea decided to play some mind games as Ronnie was waiting.

He cheekily kicked the ball off the penalty spot, but Ronaldo was not impressed.

The ex-Real Madrid and Juventus man batted O'Shea away angrily with one arm, forcing the West Brom ace to grab his head in pain

But Ronaldo, who was not punished by the ref, then had his penalty saved by Manchester City goalkeeper Gavin Bazunu in just his fifth cap for Ireland.

BETTING SPECIAL – GET £50 IN FREE BETS WITH WILLIAM HILL

However, some Irish fans questioned whether Ronaldo should have even been on the pitch to take it after his actions against O'Shea.

One said: "In the Premier League, that is a red card."

Another tweeted: "Red all day lmao."

One questioned: "How is that not a red?"

Another noted: "Any other player gets sent off there."

One added: "For a player who is all about respect and passion, that's a disgraceful act."

Ireland then took a shock lead through John Egan on the stroke of half-time and looked to be heading for three impressive points.

As the clock ticked on, it looked as if Ronaldo would have to wait to become the all-time record international scorer.

But he would not be denied, leaping to score an impressive header in the 89th minute to put him alone at the top of the scoring charts with 110 international goals.

And he was not done there, scoring with another incredible header seven minutes later to earn Portugal all three points.