THIS IS the moment an RB Leipzig player showed off his heading talents by leaping to meet a cup of beer as it was thrown at him by a Brugge fan.

A video shows 19-year-old Croatian defender Josko Gvardiol nutting the beer away in delight during celebrations in his side's 5-0 Champions League win at Brugge.

The incident occurred after the first Leipzig goal, scored by Christopher Nkunku in the 12th minute.

The Leipzig players were busy celebrating near the corner flag when the beer flew Gvardiol's way.

The defender cheekily met the beer with a powerful header – spraying the booze everywhere.

It was Gvardiol and his Leipzig team-mates who continued to celebrate by notching four more goals.

Swedish international Emil Forsberg got on the score sheet twice in the first half.

Andre Silva snatched another before half time – and Nkunku bookended the goals with his second in stoppage time. 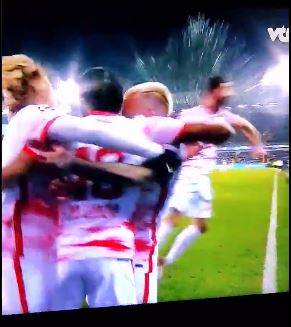 The result puts both teams on four points with one game to play.

Neither can catch Man City or PSG but will be hoping to clinch third place and a spot in the Europa League.

While Gvardiol's reaction painted the incident in a humorous light – it continues a worrying trend of missiles being launched onto football pitches.

Lyon vs Marseille was suspended after just five minutes as a water bottle struck Dimitri Payet in the face.

The object was thrown by the Lyon crowd as Payet went to take a corner.

The 33-year-old, formally of West Ham, required medical attention but was thankfully able to walk off the pitch unaided.

The match was suspended for an hour and a half before Lyon tweeted pictures of their players warming up again.

But two hours after the incident, they took to social media again to confirm the game would not be restarting.