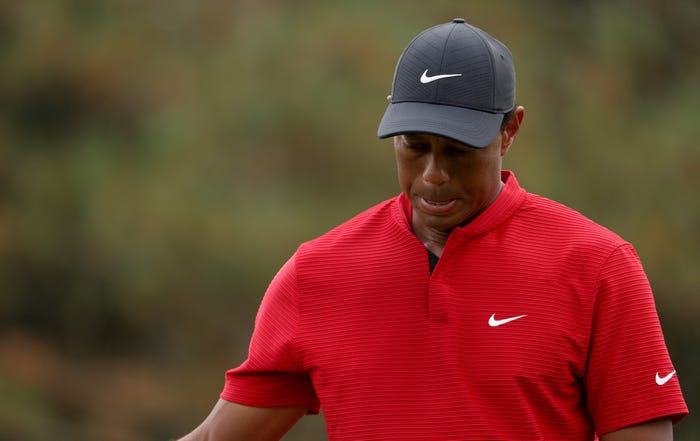 Tiger Woods shot the worst hole of his career on Masters Sunday, hitting the water three times for septuple bogey.

The five time Masters champion misread the wind at the par-three 12th hole, hitting his tee shot into Rae's Creek in front of the green.

After a one-shot penalty, he hit his third shot straight back into the drink, before finding the bunker with his fifth.

From there, he found the water again, before eventually finding the green with his eighth shot and two-putting for a 10.

In the near 25 years Woods has been a professional golfer, he has never previously carded a 10 during tournament play.

"I committed to the wrong wind," Woods said after of his nightmare hole, which was the highest single hole score he's ever registered on the PGA Tour. "The wind was off the right for the first two guys, and then when I stepped up there, it switched to howling off the left."

"From there I hit a lot more shots and had a lot more experiences there in Rae's Creek, and then this is unlike any other sport in which you're so alone out there and you have to figure it out."

Woods birdied five of his last six holes to finish the day with a four over par 76 on the day, ending the tournament in joint 38th place at one under par.

"This sport is awfully lonely sometimes," he added. "You have to fight it, nobody is going to bring you off the mound or call in a sub.

"You have to fight through it. That's what makes this game so unique and so difficult mentally. We've all been there, unfortunately.

Unfortunately I've been there and you just have to turn around and figure out the next shot, and I was able to do that coming home."