Wearing a weighted vest can help obese people rapidly lose weight by tricking the brain into thinking they are heavier than they are, a scientific study concludes.

Moderately obese people wore a vest filled with 24lbs (1kg) of weights for eight hours a day and lived their  lives as normal.

After 21 days, these people lost 5.2lbs (1.6kg) while maintaining their muscle mass.

The Swedish researchers even think the novel weight-loss method could be more effective than some forms of physical exercise. 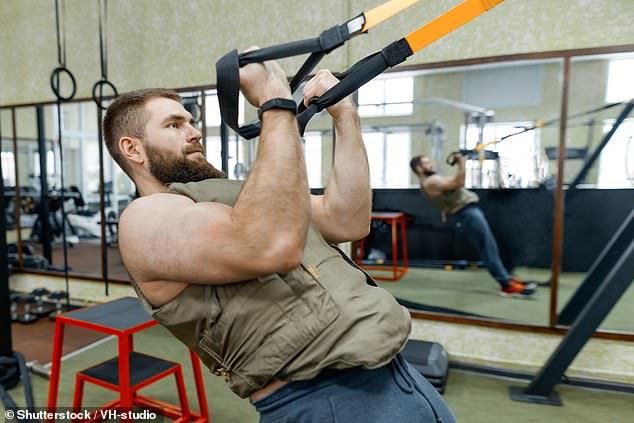 Moderately obese people wore a vest filled with 24lbs (11kg) of weights for eight hours a day and lived their lives as normal. Pictured, a person working out in the gym wearing a weighted vest

‘The effect on fat mass we found, from this short experiment, exceeded what’s usually observed after various forms of physical training.’

Sixty-nine people with a body mass index (BMI) of 30-35, the lowest obesity category, took part in the clinical study

Half the study group wore vests weighing just 2.2lbs (1kg) while the others wore the heftier vests.

By the end of the experiment those who wore the light vests had lost 0.6lbs (0.3kg).

Although the study proved a link between the weighted vests and weight loss, it was unable to ascertain where the body weight as lost from.

Obesity’s affect on the brain is poorly understood and a growing area of research.

A study by the University of Alabama suggests weight gain impairs our cognitive functioning even in those without dementia.

And brain scans taken of morbidly obese patients reveal older people who carry dangerous amounts of weight have higher levels of degradation of the brain cells.

However, whether this also occurs in younger patients is unclear.

Obesity has also been linked to a reduced attention span, as well as slower motor speed and information processing.

Older people are consistently found to be more affected, which may be due to cognitive function declining with age anyway.

And reduced cognitive functions may affect an obese person’s ability to lose weight.

Poor memory and functioning has also been linked to patients ‘slipping’ from their weight-loss programme after bariatric surgery.

The team were not able to determine whether the reduction in fat was subcutaneous or from belly fat, which is linked to heart diseases and diabetes.

It is believed the weight loss phenomenon occurs by duping the brain into thinking it weighs more than it actually does.

The presence of the innate scale — the gravitostat — first sprung up from a 2018 study.

It proved its existence in mice but this study, published in the journal EClinicalMedicine, proves it also exists in humans.

They think the weighted vests raise the gravitostat reading, resulting in weight loss, but many questions about how the in-built function works remain unanswered.

Now the researchers want to see whether the weight reduction continues for the vest wearers over periods longer than three weeks, and whether the novel weight-loss method targets dangerous visceral fat.

They also want to delve deeper into how the vest works to see how it impacts energy expenditure, appetite and mobility.

The study was published by Gothenburg University.