Jana Kramer wants a fresh start after her split from her estranged husband Mike Caussin. The country singer announced in April that she and Caussin were divorcing after six years of marriage, citing inappropriate marital conduct, irreconcilable differences, and adultery as the reasons. The mother-of-two opened up about their split in a May episode of her podcast “Whine Down,” saying (via Us Weekly), “It’s like, you already took everything. Not everything, but you took my family away from me.”

Now Kramer is ready to move on completely and has decided to sell her wedding ring so she can do just that. She recently revealed on her podcast how she plans to spend the money she gets from it. She said (via People), “I have redone pretty much my entire house … I sold my ring, and that money from the ring paid for the furniture and the new additions to the house.”

The “One Tree Hill” alum went on to tell fans how at first she wasn’t sure what to do with the money, saying, “I debated. I’m like, ‘I’m going to sell this ring and then maybe buy myself something.’ Like a bag, or my divorce present.'” Yet it became clear what would be the best for Kramer during this difficult time. She explained, “I was like, ‘Honestly, what would make me happiest is to have new energy in the house.’ So I took that money and gave it to [interior designers].” Clearly Kramer put that ring to good use!

Jana Kramer wanted a new space that was hers 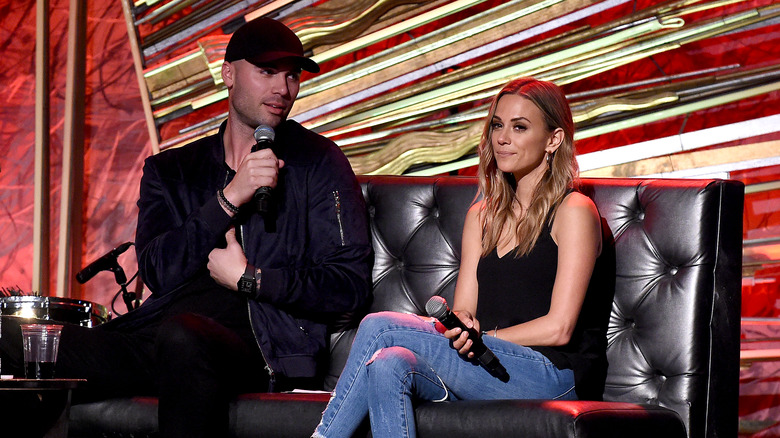 Jana Kramer is ready to move on from her ex, Mike Caussin, and to do so, she revealed she needs to change her environment. She decided to redo the home they once shared. The “Beautiful Lies” singer dished on her podcast “Whine Down” (via People), “This was our house and we made memories here. I needed to create a new space that felt like me and felt like mine.” She also revealed how she was going to do it, saying, “I’m going to make it this really cool, girlie wine bar. So that’s helped me a lot.”

Sadly, this isn’t the first time Kramer has gotten rid of a wedding ring from the former sports star. The actor sold another ring from Caussin when they first split in 2016, “Cause the first ring I was like, ‘I will never put this back on my hand,'” she explained. “He had re-proposed to me in Napa a few years ago with this new ring. I took every diamond he ever bought me and I sold them, because I didn’t want to look at them ever again.”

And it’s not only rings from Caussin that Kramer no longer wants, but even bracelets. Caussin gifted her a diamond bracelet when their book came out, but Kramer explained, “it represented something that was not true.” For Kramer it doesn’t matter how beautiful a piece of jewelry is if “what they represented made them the ugliest things I’ve ever seen.”