It’s one of the first big movie releases since the coronavirus pandemic shut down cinemas and film production.

But Disney’s Mulan is facing calls for a boycott in some Asian countries.

Now Thai and Taiwanese activists are also telling people not to see Mulan.

You might remember the huge protests in Hong Kong last year. Young people led months of demonstrations against a law which would allow extradition from Hong Kong to mainland China.

The protests widened to include demands for democratic reform and an inquiry into alleged police brutality.

During a period of unrest Chinese-born actress Liu Yifei – who’s an American citizen – shared a post from the government-run Beijing newspaper People’s Daily on Weibo.

“I support the Hong Kong police. You can all attack me now. What a shame for Hong Kong,” it read. 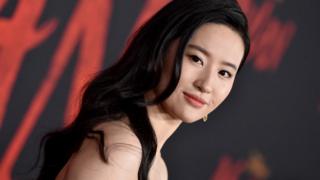 It didn’t take long for #BoycottMulan to trend on Twitter – a site that is banned in China – while Chinese citizens voiced their support.

That was last year, but things are still tense in Hong Kong.

The extradition law behind initial protests was dropped, but in April this year many high-profile pro-democracy activists were arrested by Hong Kong police. A month later the police watchdog said it found no significant wrongdoing on the police’s part during the 2019 protests.

Then in June, China passed a new security law that critics have called the “end of Hong Kong”.

Its details were kept secret until it was passed, but it criminalises many things that could pose a threat to China’s authority in Hong Kong – making them punishable by life in prison.

With all that history and everything still going on, prominent activist Joshua Wong has called for “everyone who believes in human rights to #BoycottMulan”.

Joshua’s claim that Disney “kowtows to Beijing” echoes comments made by the US attorney general William Barr last month.

He claimed Disney and other Hollywood studios “bow to Beijing”, censoring films by tweaking scripts and character nationalities in order to ensure distribution in China, which is now the second-biggest movie market in the world.

The original Mulan film – released in 1998 and based on a Chinese legend dating back centuries – flopped in the story’s birthplace. You may have fond memories of it, but look back and you’ll see the idea of China it promoted was pretty stereotypical.

Given that “Chinese takings can make or break a movie”, according to cultural analyst Xueting Christine Ni, Disney wants it to be a success there this time around.

It was partly filmed in China, and the script owes more to the original 6th Century source material.

There’s a reason we love Mulan.

She’s a heroine who fights for what she feels is right, despite the many obstacles in her way.

With a story like that, it’s not surprising protesters in Hong Kong saw her as a symbol for their struggle. When activist Agnes Chow was arrested last month, she was described by supporters as the “real Mulan”.

Now after years of military rule it’s Thailand’s turn to demand change – with thousands of people taking to the streets this year, particularly over the past month.

The student-led movement wants amendments to the constitution and monarchy, a new election, the prime minister to resign and rights activists to stop being harassed.

They are also anti-China, with worries about the country’s influence in the region.

That’s led to the #MilkTeaAlliance, as protesters in Hong Kong, Taiwan and Thailand have called themselves – based on the sweet drink loved in all three countries.

Thai student activist Netiwit Chotiphatphaisal has been using his Twitter to share messages about Mulan in the build up to the film’s release, asking people not to watch it so “Disney and the Chinese government know that the violence of the state against the people is unacceptable”.

Will it make a difference?

Mulan’s delayed release, straight to Disney Plus rather than in cinemas due to coronavirus, comes off the back of three Disney remakes last year.

The six films it has remade since 2015 – Cinderella, The Jungle Book, Beauty and the Beast, The Lion King, Aladdin and Dumbo – have made a combined $5.8bn (£4.4bn) at the box office. So there’s clearly an appetite.

Disney super-fan Emily Talbut, from the UK, says fans will want to see it “to support those lesser-known actors and encourage Disney to continue making films like that.

“It does have greater diversity than what we’ve seen before.”

Chinese viewers spotted some historical inaccuracies in the trailer.

But a poll on Weibo when that first trailer came out found that over 115,000 users were “satisfied” with what they knew of the film so far.

“China finally has its own Disney princess,” as one user put it.