A woman who was told she could never have children has revealed she raised a little boy as her own after her neighbour left him with her to go shopping and never came back.

Rosalinda, from the south of England, who is now in her seventies, explained how he stayed with her until he was 18, at which point he went to live with his father, in a video shared on TikTok.

The experience inspired her to become a foster parent, which eventually led to her adopting her daughter Lola, now 30.

Speaking to camera, Rosalinda, who has nearly 52,000 followers on TikTok, told how she was given the devastating news she would never have children of her own ‘after lots of investigations’ when she was in her early twenties. 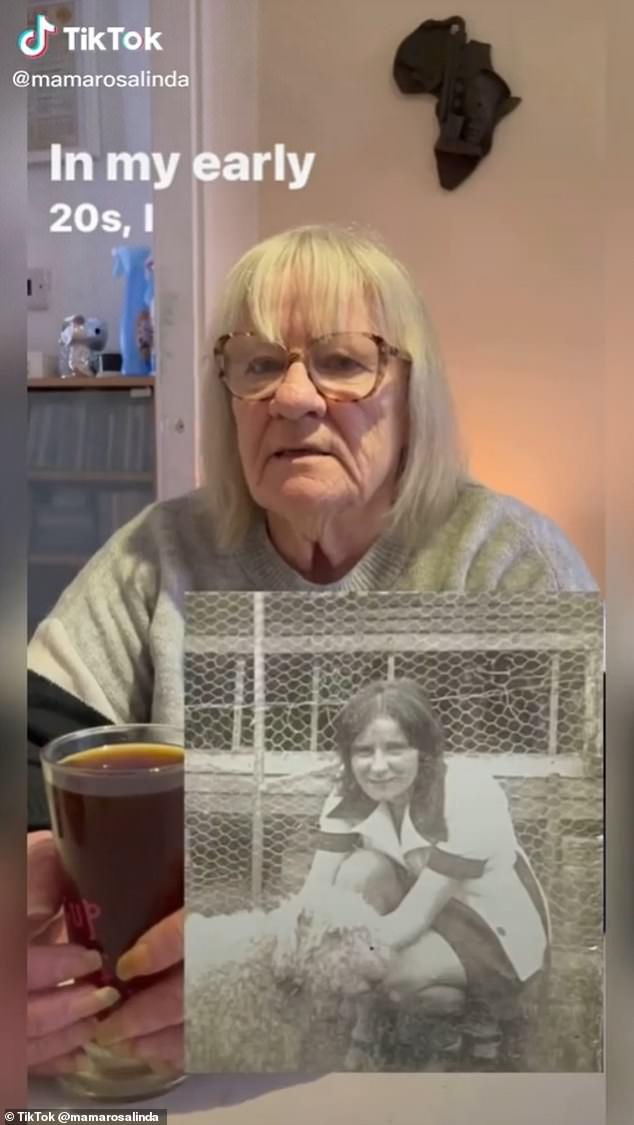 Rosalinda, from the south of England, who is now in her seventies, was told she couldn’t have children of her own when she was in her early twenties (pictured)

She went on: ‘When my next door neighbour asked me to look after her little boy while she went shopping, I said of course. But she never came back.

‘That little boy stayed with me through my marriage, that I’ve spoken about before, until he was 18, when he found his dad and left to go and start a new life with his father, and maybe his mother, I’m not sure. So I decided to become a foster parent.’

Rosalinda’s first foster child was a little boy called Adeola, and over the years she fostered ‘many children’ which led to her adopting her daughter.

She recalled how Lola came to her in mid-May, 1990, and described her as ‘such a beautiful little baby’ with ‘really beautiful eyes’ – and she’s been with her ever since and even appears on some of her TikTok videos. 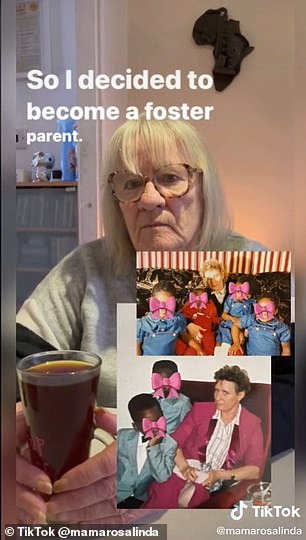 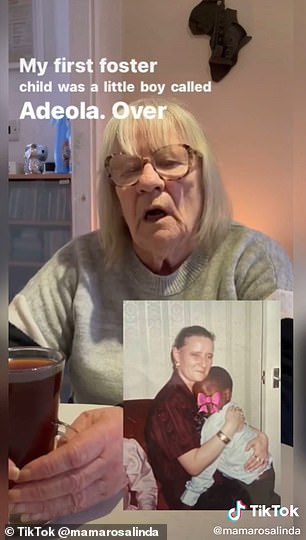 She brought up her next door neighbour’s son as her own when she abandoned him, and the experience inspired her to become a foster parent to ‘many children’ (right)

In one clip, in which they joke about Lola’s adoption, Rosalinda reveals she had to fight ‘long and hard’ for her.

In her first TiKTok video, Rosalinda claimed she caught her husband-of-three-months in bed with her sister, after coming home from work unexpectedly with a migraine during a night shift. She explained her sister was living with them at the time because she’d left her husband.

As she sat down with a cup of coffee and some painkillers, she said she heard some ‘strange noises from above’ and presumed it was the children stirring.

‘I went to check on the children and they were fast asleep, then I realised the noises were coming from my sister’s room,’ she claimed.

‘I checked upstairs in my room, and my husband was nowhere to be found. So I went into her room, turned on the light, and there they were. I chased them out screaming, they run down the stairs, I picked up what looked like a meat chopper from the kitchen, my sister run so quickly out of the front door in just her underwear.’ 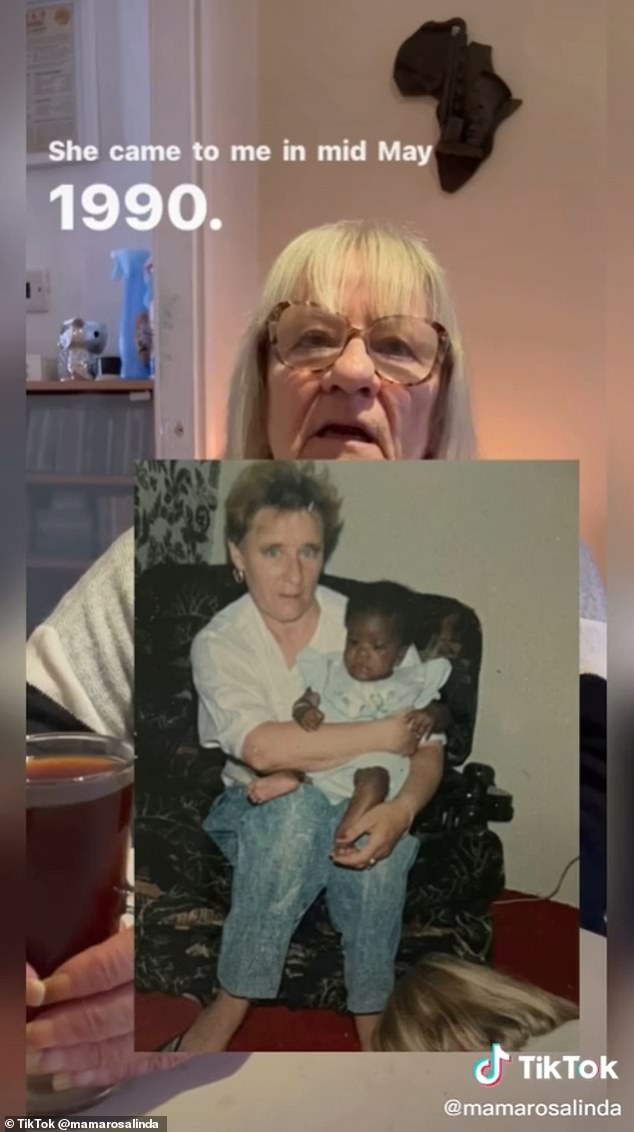 Rosalinda said her daughter came to her in mid-May, 1990, and she described her as ‘such a beautiful little baby’ with ‘really beautiful eyes’ (inset) 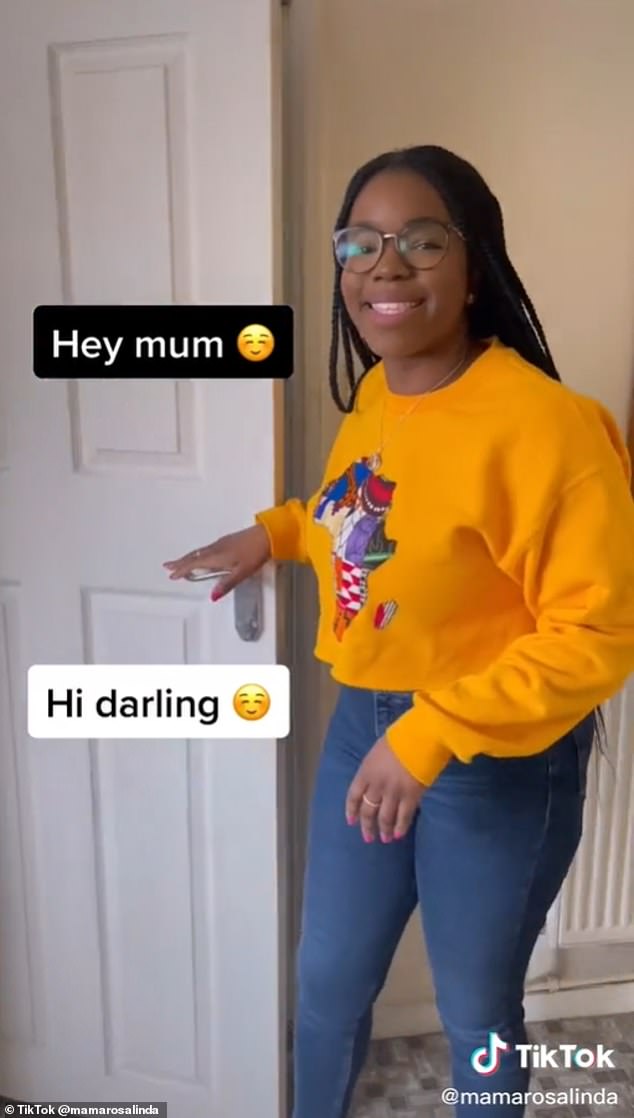 In one of Rosalinda’s TikTok videos, in which they joke about Lola’s adoption, the proud mother reveals she had to fight ‘long and hard’ for her daughter

She said the pair haven’t made up after 30 years, but claimed her sister and her ex-husband later invited her to their wedding.

Rosalind found love again in 2006, when she was 55, but insisted she had a ‘very eventful’ life in between. In her next video she discussed her fostering journey.