A mother has shared her easy three-ingredient recipe for home-made ice cream.

Johanna Liat-Berry, from Essex, explained people can whip up their own tubs using just whipped cream, sweetened condensed milk and some flavouring – and there is no ‘fancy equipment’ required.

She shared the recipe on the Extreme Couponing and Bargains Facebook group and inspired other users to try the recipe for themselves.

Johanna Liat-Berry, from Essex, shared a picture of her homemade icre-cream and the recipe online

Posting pictures of her delicious results, she said: ‘This was my first attempt at making ice cream from home and it couldn’t be easier and quicker.

Johanna revealed she she used two pots of 300ml whipped creamand a 397ml tin of sweetened, condensed milk – before whipping them.

‘Put both the whipping creams and one and half of the condensed milk in a mixing bowl and mix with an electric mixer, until stiff peaks form,’ she explained, warning against overmixing. 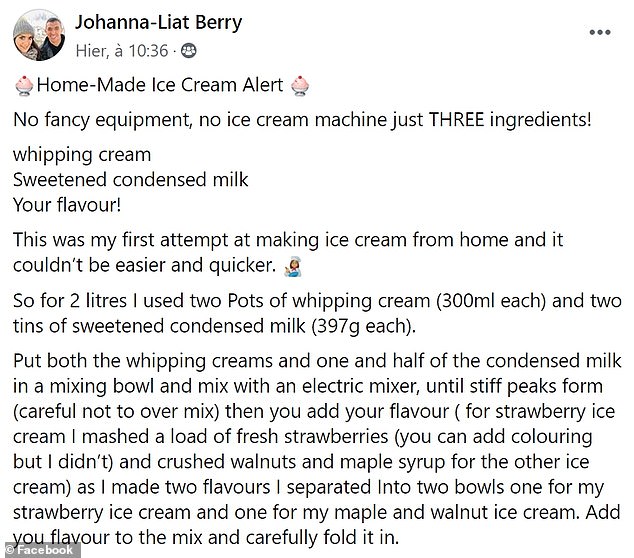 Johanna said she only used three ingredient for her home-made ice-cream: sweet condensed milk, whip cream and a chosen flavour

Johanna, who was pleased with her results, said she would be trying two new flavours next: coffee and pistachio

She then recommended adding your chosen flavour, explaining she personally added fresh strawberries for one of her mixes, and walnuts and maple syrup for another.

Johanna recommended carefully mixing the flavour with the cream and condensed milk until smooth.

Once the mix is finished, she said the final step is to transfer the mix into a freezable container such as tupperware, before popping it into the freezer.

People were excited by the mouthwatering ice-cream, with many saying they’d try their own delicious combinations

The mix can be tried after four hours for those who like their ice-cream soft, or overnight for a more frozen end result.

Johanna evealed she will be trying her hand at coffee ice cream and pistachio flavour next.

‘Sounds delicious,’ one commented, while another wrote: ‘We should try this’.

‘Might have to try banana and maple syrup or chocolate and peanut butter. They look really good,’ another said.

‘That looks tasty I night try to make it,’ another wrote.