We Can't Stop Thinking About Amanda Gorman's Yellow Coat — You?

Happy new year! And welcome to our new world, where we watch everything on the telly. Or the phone. Or the tablet. Whatever. It all happens on screen. We can watch, we just can’t go.

No people, just rock bands and ABC hosts putting it out and hoping we turn it on. 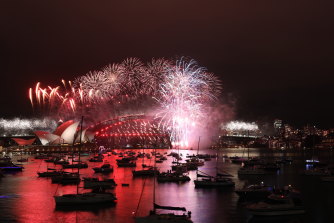 Our photographer Dominic Lorrimer captured Sydney’s fireworks Mrs Macquarie’s Point. The majority of us had to settle for the sofa.Credit:Dominic Lorrimer

It’s a tough challenge, as Thursday night’s broadcast of Australia’s masked New Year's Eve ball proved. It was a fitting end to the year. Lots of remote bang, no expense of your personal buck – but you had to be very excited by the night to be moved by the remoteness of three hours of performances without an audience and no clapping or cheering.

Those audiences were not in Sydney, traditional home of the ABC’s NYE shebang, nor were they in Melbourne, which got a look in via an audience-free show at the Sidney Myer Music Bowl.

It was in Melbourne that the promoted hosts, Charlie Pickering and Zan Rowe, were stranded. Stranded! Now there’s a compliment for the southern city to savour. Due to border closures, they were deputised in Sydney by Jeremy Fernandez and Triple J’s Linda Marigliano. But it didn’t much matter who was where, doing what. Without crowds, everyone looked like they were doing the gig on a green screen and after a year of Zoom backgrounds, who knew?

But the ABC tried hard and did well on a quick turnaround given the border and crowd issues.

We started with the traditional kids' show at 8.30, hosted by Rove McManus. Rove’s problem: there was no 9pm fireworks show, which left him bouncing off stuffed animals and child sidekicks. He did it with perfect professionalism and it rolled along – even ABC boss Ita Buttrose popped up in a video segment – but there was no big bang to build to. The closure to the kids' show, with ABC news, gardening and weather folk jiving to I Can See Clearly Now, was the best we got.

For the real couch-bound fun we had to wait till midnight, on a mostly empty Sydney harbour.

Pickering and Rowe did the heavy lifting.

“Yes, we are…” said Pickering.

They were said to be in front of the Sidney Myer Music Bowl, but it looked like that Zoom background. They threw to Sydney’s Fernandez, who beamed and said appropriately while wearing a weird silver jacket: “It seems very weird to be in this silver jacket.”

No need to apologise, Jez. Given the circumstances, your weird silver jacket was among the brightest parts of the show. Literally.

No crowds, no noise.

“Just another spanner in the works,” said Jez.

“You can say crappy,” ventured Marigliano.

Yes, you could, because the year being farewelled warranted the description. The broadcast gave us flashbacks to a year that started with fires and was defined by a virus. We waited for the music, and when it came it was mostly brilliant, if mostly less than celebratory. Jez’s jacket was the most disco thing on hand.

Ben Lee asked the at-home crowd to “yell at your TV” as he crooned “we’re all in this together”. The songs had a theme. Emma Donovan gave us Love The One Your With and I Say A Little Prayer. The Teskey Brothers did an INXS cover: Never Tear Us Apart. Someone had researched lockdown-appropriate tunes.

At 10, Paul Kelly commanded the stage from the Bowl. There were his own hits, and guests both locally and at the Opera House – Vika and Linda Bull, Alice Sky, Ziggy Ramo, Kate Miller-Heidke – interspersed with Kelly classics. Just before 11, the man’s guitar went wonky. As if no audience wasn’t enough, the legend’s equipment was on the fritz. “Oh no,” he said. “I feel like John Lennon and the Quarrymen.” This was a nod to history, when pre-Beatles Lennon fronted an audition with busted strings, or something like that.

From Little Things, Big Things Grow, as they sang.

There was Odette with a tribute to Helen Reddy, delivering I Am Woman with a roar. And Casey Donovan – the killer voice that requires no audience – with the works, including a knockout cover of Dolly Parton’s 9 to 5.

Then we closed with the fireworks at midnight.

More compelling was the Australian cast of Hamilton with Auld Lang Syne.

“Should old acquaintance be forgot.”

It was a lovely end to a rough year.

Find out the next TV shows, streaming series and movies to add to your must-sees. Sign up to get it every Thursday.

Related posts:
TV and Movies
'Little House on the Prairie': Melissa Gilbert Called This Co-Star 'One of the Sweetest, Kindest Men I Have Ever Known' … And It Wasn't Michael Landon
‘X-Men’: Patrick Stewart Admits Talks with Marvel Studios Took Place
Natasha Leggero To Host Whodunnit Cooking Format ‘Rat In The Kitchen’ For TBS
'I Can See Your Voice' Renewed for Season 2 at Fox
Lucifer season 5: Can Lucifer have children?
Recent Posts
This website uses cookies to improve your user experience and to provide you with advertisements that are relevant to your interests. By continuing to browse the site you are agreeing to our use of cookies.Ok