Glowing in green! Zara Tindall is elegant in a teal coat as she joins Mike and BFF Dolly Maude at the Cheltenham Festival

Zara and Mike Tindall were among the horseracing fans who descended on Cheltenham Racecourse as the festival enters its third day.

Zara, 40, was the picture of elegance in a teal trench coat from Claire Mischevani, which she wore with matching heels in a nod to St Patrick’s Day.

Thursday at Cheltenham is always known as St Patrick’s Day at the event, even if it doesn’t fall on March 17. However, this year the two days crossed over, inspiring attendees to pull out all the stops.

Mother-of-three Zara was accompanied by her husband, 43, who looked dapper in a check suit with matching vest, and her BFF Dolly Maude, who sported a vibrant green blazer jacket over a mini dress.

The trio appeared in good spirits as they made their way into the racecourse, eager to watch jockeys taking on the Paddy Power Stayers Hurdle.

Zara’s mother Princess Anne, 71, and her husband Sir Timothy Laurence, 67, are also at Cheltenham today, but did not follow the tradition of wearing green for St Patrick’s Day. 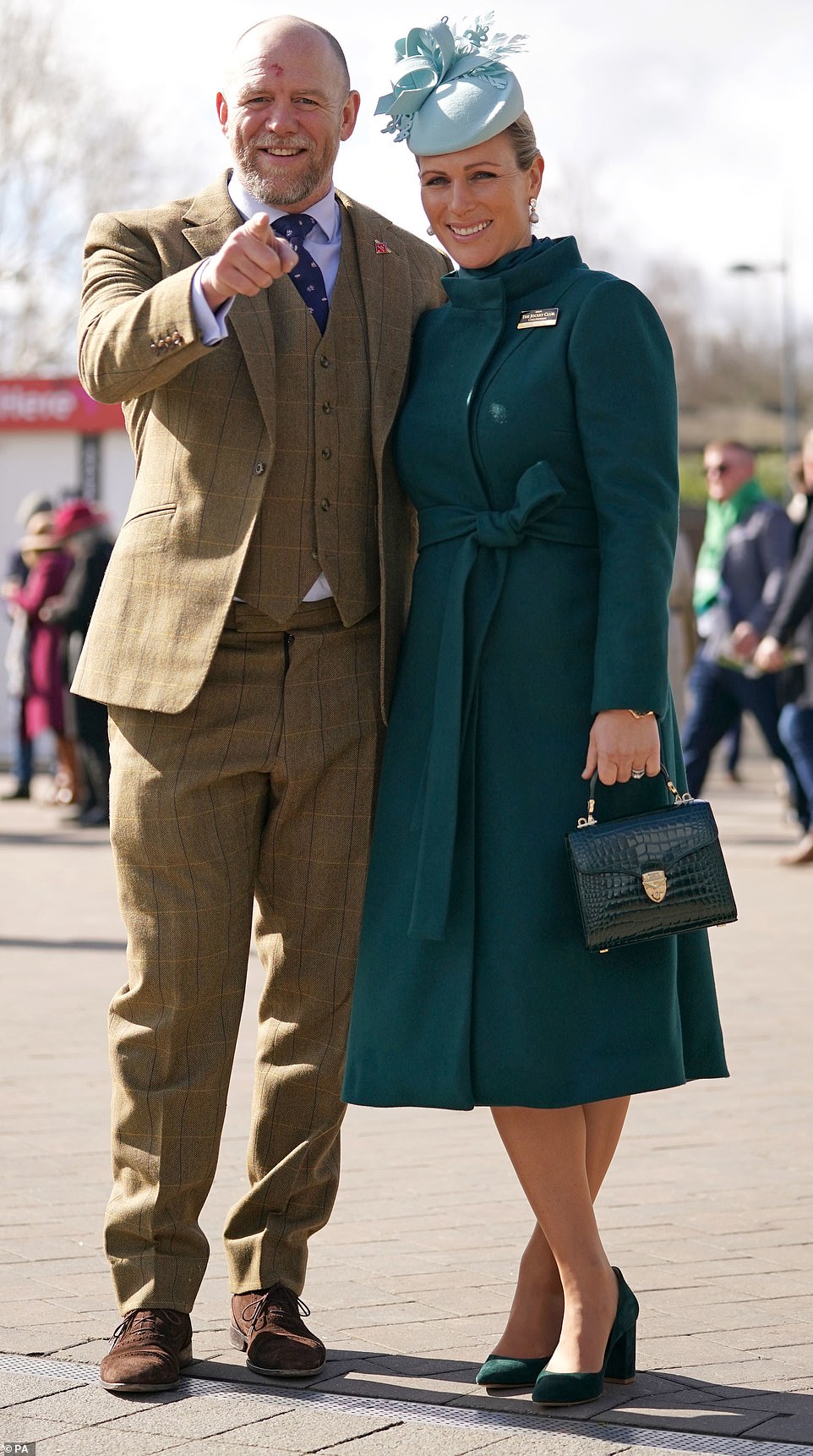 Zara, 40, and Mike Tindall, 43, were among the horseracing fans who descended on Cheltenham Racecourse as the festival enters its third day 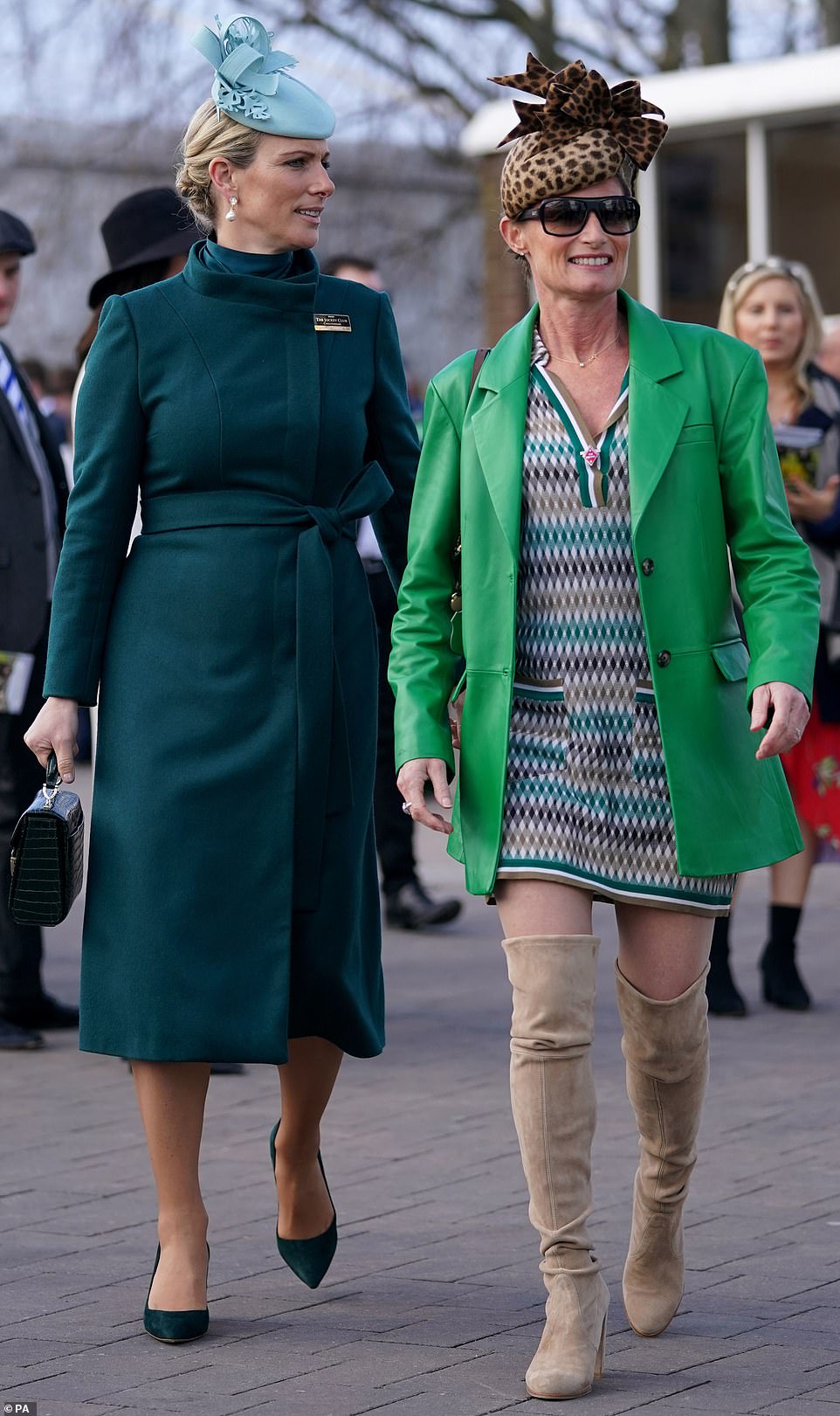 The couple were accompanied by Zara’s long-time friend Dolly Maude, who helped deliver her son Lucas in 2021 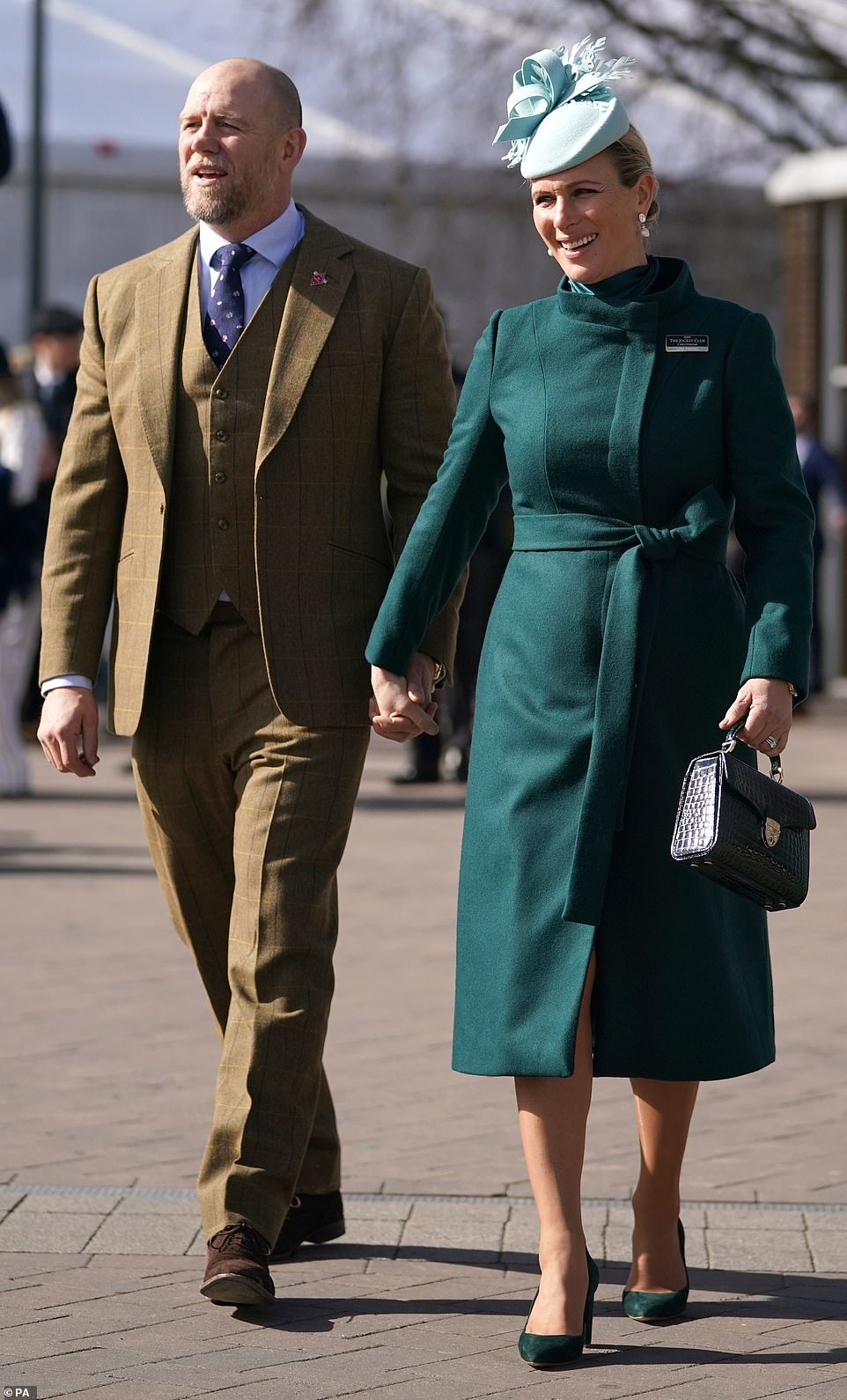 Love birds! Mike and Zara packed on the PDA as they walked along the racecourse hand-in-hand 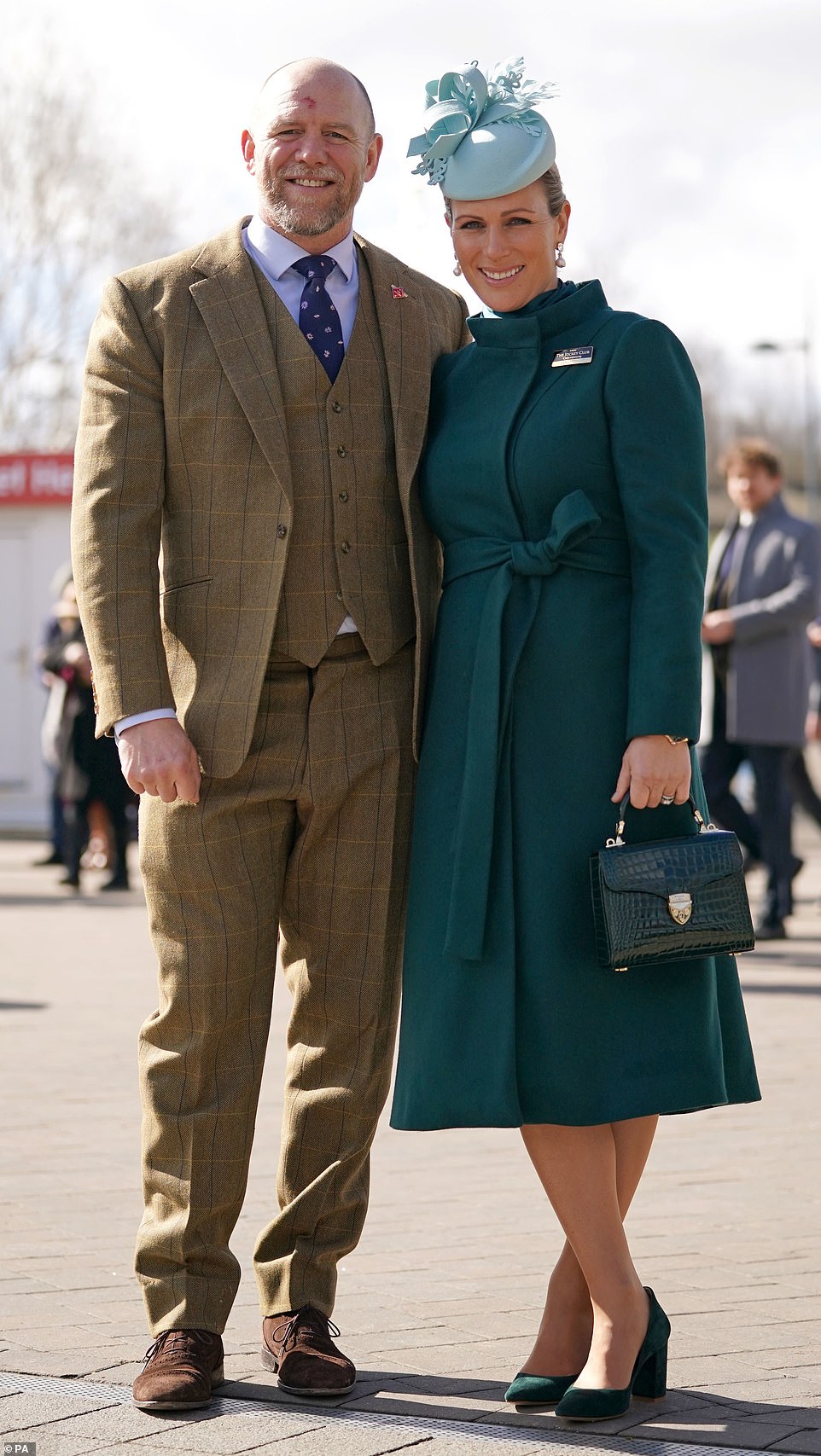 Stunning! Zara looked elegant in a teal coat she wore for St Patrick’s Day, while Mike was dapper in a tan checked suit 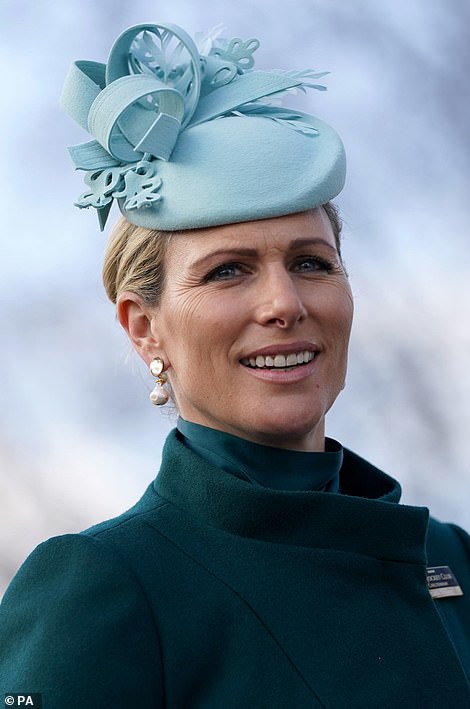 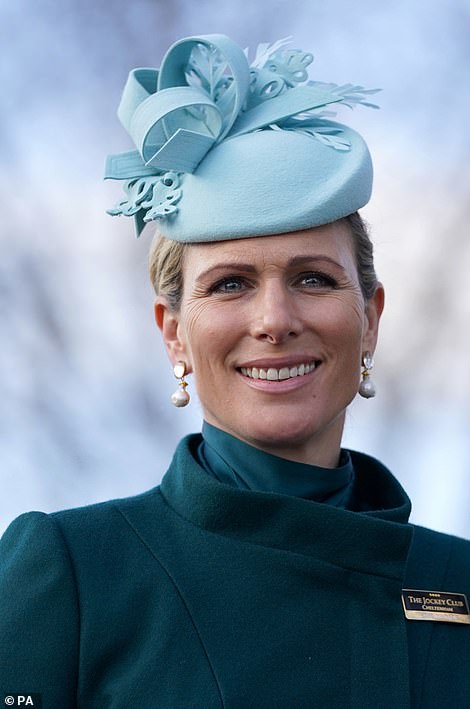 Zara, who left her three children at home at Gatcombe Park to enjoy the horseracing event, looked stunning in the woolen coat, which was tied at the waist with a built-in belt of the same gorgeous shade of teal.

The turtleneck of a teal blouse from Really Wild poked out from the small round collar of her coat.

Her blonde locks were styled in a neat updo which revealed a pair of dropped pearl earrings from Laurence Coste.

She accessorised with teal heels from Emmy London, but stirred clear from being too matchy-matchy with a pastel blue hat from Juliette Botterill and a black leather bag from Aspinal. 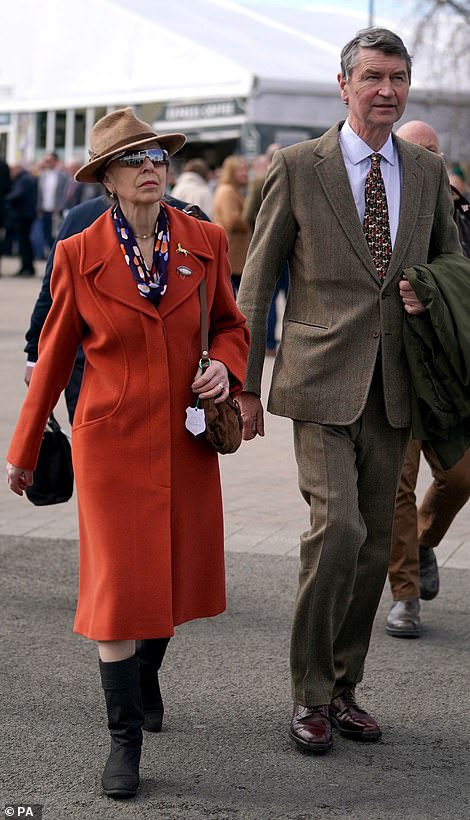 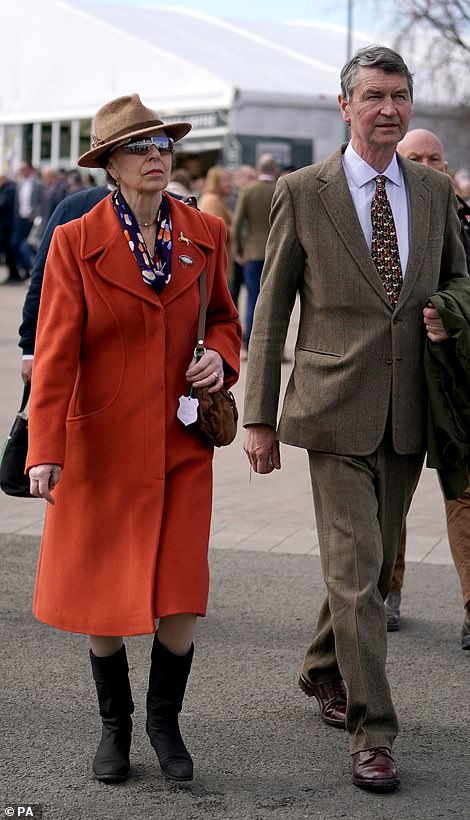 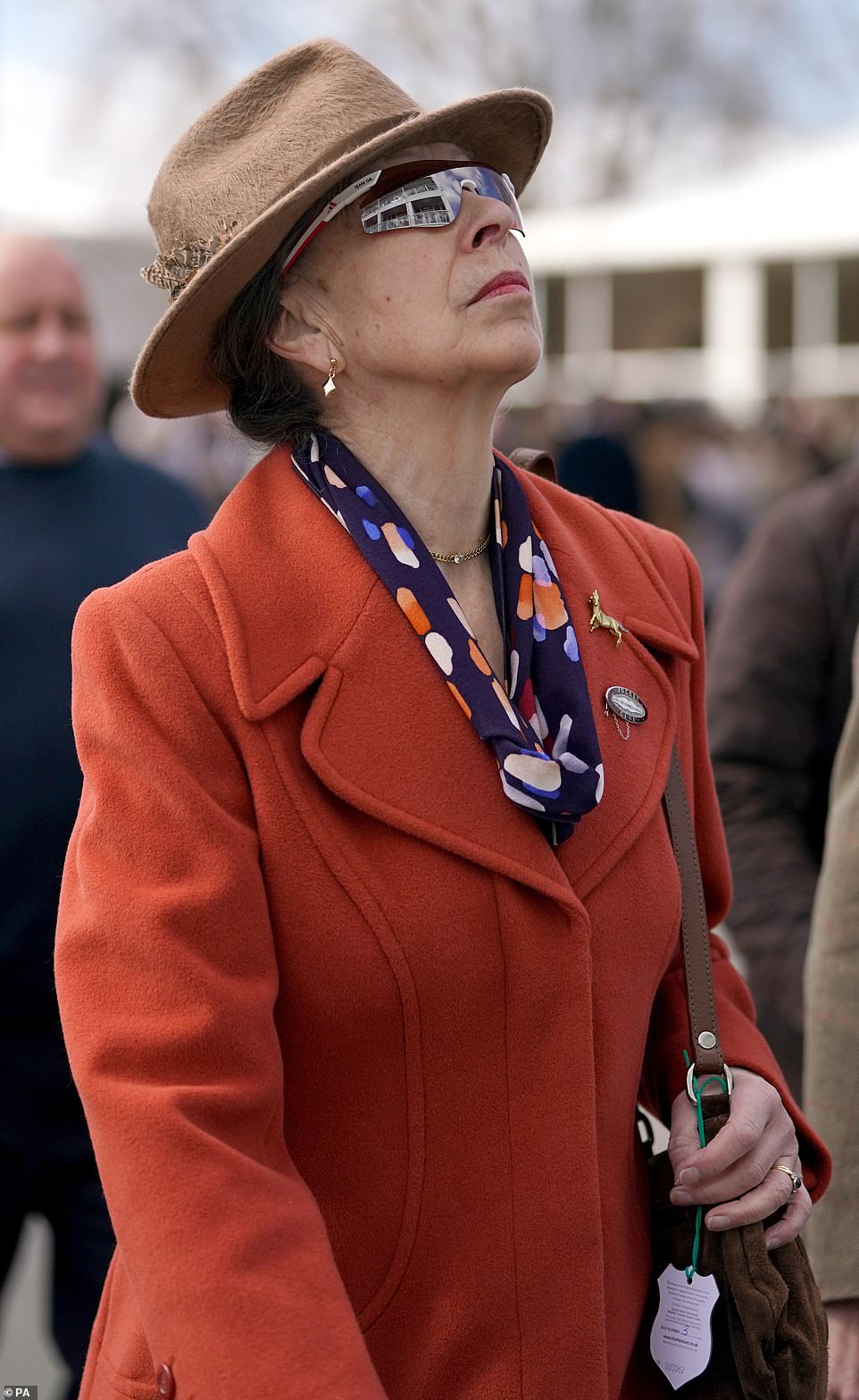 The Princess Royal looked elegant with a tan hat. She was also wearing a horse brooch in honour of Cheltenham, and a pair of sunglasses

The stylish mother-of-three sported her usually barely-there makeup, with a glamourous trait of eyeliner and just a dash of mascara bringing the focus to her deep blue eyes.

Proud husband Mike looked dapper in his suit with a checked detail and its matching vest. He kept things simple with a light blue shirt and a floral navy blue tie.

The pair were accompanied by their long-time friend Dolly Maude, who helped Zara deliver her son Lucas in 2021.

Dolly opted for a fun look, sporting a vibrant green blazer over a striped dress in blue and brown, which she paired with thigh-eye nubuck boots in beige.

Presenters Charlotte Hawkins and Francesca Cumani were snapped green to celebrate St. Patrick’s Day, as they arrived for day three of the Cheltenham Festival 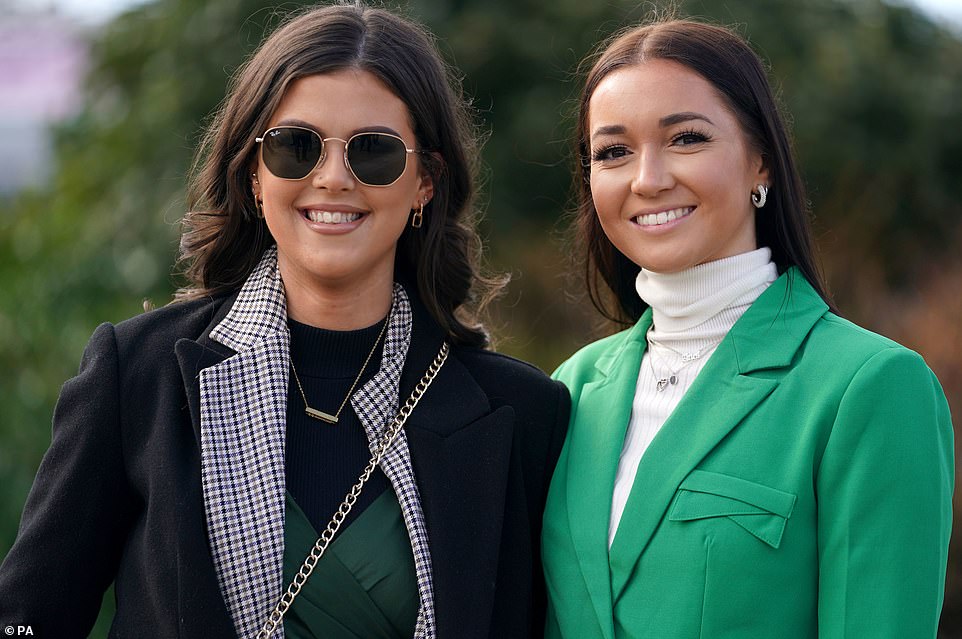 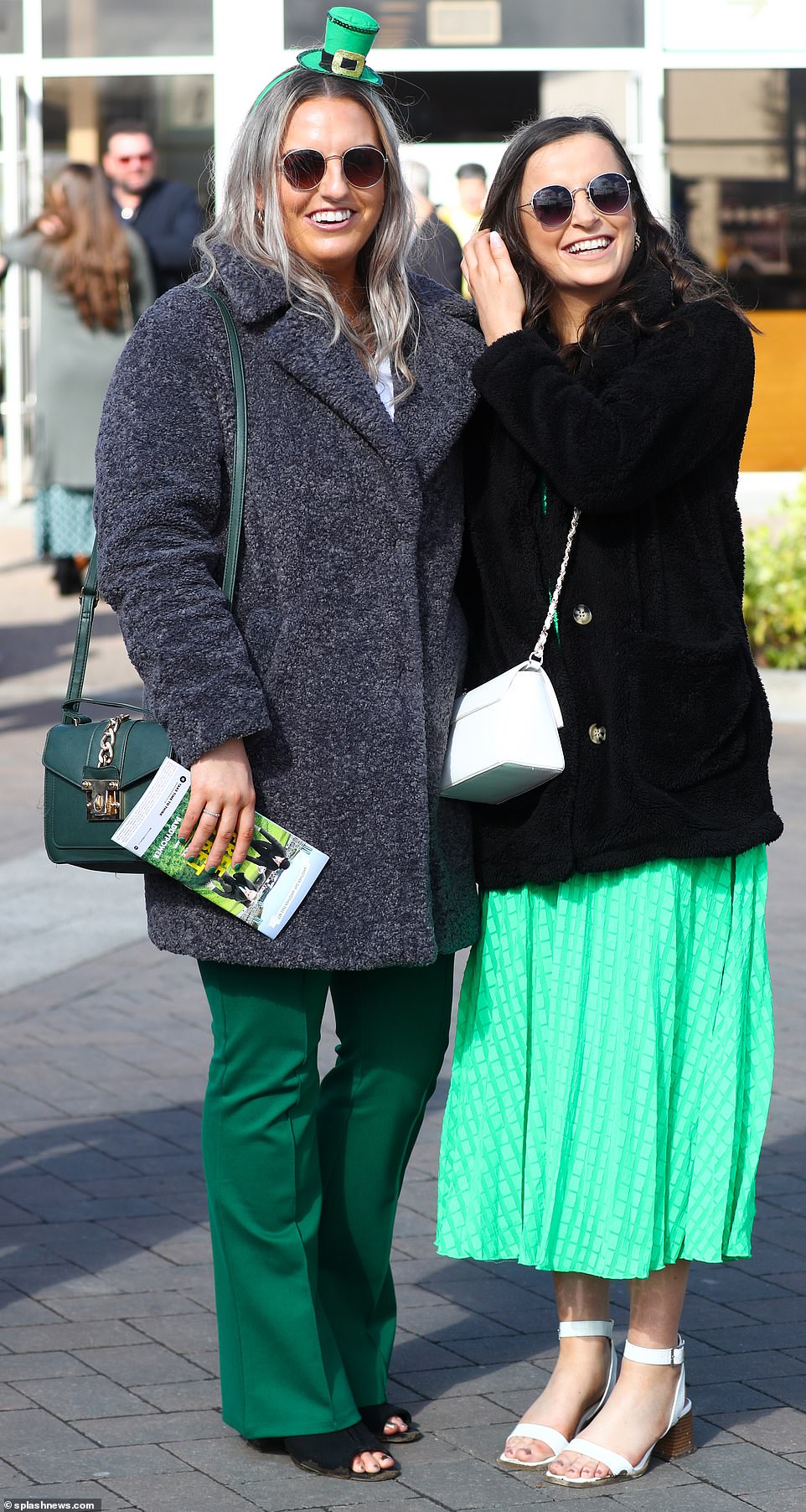 Hat’s the one! This woman added the finishing touch to her green slacks and handbag with a special fascinator in the shape of a leprechaun’s hat

She accessorised with a leopard hat with an eye-catching bow, and a pair of sunglasses.

Anne, 71, was wearing a bright orange coat, with a navy blue scarf adorned with spots of white, purple and orange, which went nicely with the rest of her outfit.

The no-nonsense Princess royal wore a tan hat and black boots to the racecourse, along with a pair of sunglasses.

Sir Timothy, 67, looked smart in a tan suit and kept up with the theme with a whimsical tie adorned with white and red horses.

Racegoers adopted a distinctly Irish sartorial style today as the third day of the Cheltenham Festival got underway.

This year’s festival marks the first time Cheltenham has welcomed punters since 2020, after the pandemic forced organisers to hold last year’s event behind closed doors. 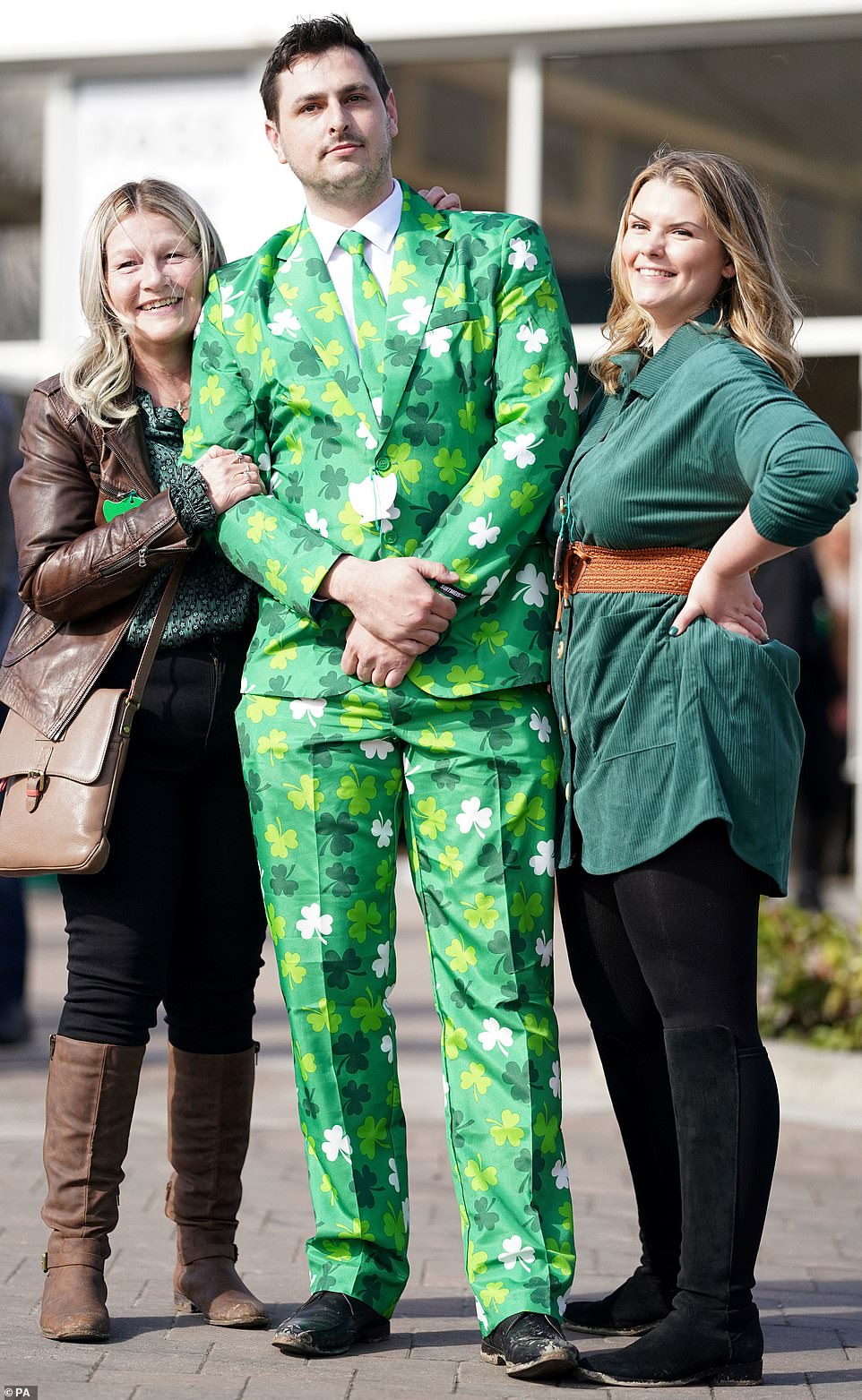