People on the internet can’t seem to shut up about Netflix’s new show Outer Banks. If you haven’t watched yet, it’s about a hot kid named John B. who lives in, you guessed it, the Outer Banks of North Carolina, and the show follows he and his hot friends as they try to solve the mystery surrounding his dad’s disappearance. The show is pretty addicting, but there are about 1,234,890 things about it that don’t quite make sense.

Full disclosure, I’ve only watched the first four episodes of the show, but I’m here to keep a running list of the nonsensical things I’ve seen so far. If there are things on this list that do get resolved in later episodes, I sincerely apologize.

If John B.’s dad has been missing for nine months, who’s paying the mortgage on their house?

And who’s paying for the insurance on that car? And who’s paying the hot water bill? And electric? There’s no way this kid would still have the lights on! He got fired from his job, which probably didn’t pay more than minimum wage anyways! 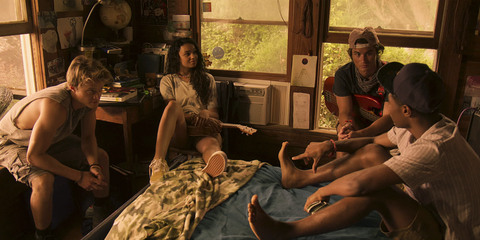 How do these kids have these huge parties and get away with it?

Like, no one noticed hundreds of kids on a beach? Or hundreds of kid’s at Topper’s house? I’m just saying in my hometown that woulda been shut down faster than I could even say “KEG STAND!”

Does John B. shower?

Because, in all seriousness, he looks a little grimy… all the time. Is that sweat? Is he glistening from constantly being on the water? I can’t say for certain, but I’d venture to guess he does not smell great.

Why are these kids allowed to just venture out to sea?

John B. and the gang took a boat very far offshore to try to find the Royal Merchant, and a literal storm was brewing. I’m sorry but John B.’s dad literally got lost at sea. Shouldn’t they be a little more concerned for their own lives??

You’re trying to tell me that huge house Sarah lives in doesn’t have air conditioning?

I know the house is old, but it’s baffling to me that rich people in the Outer Banks wouldn’t update their mansion to have air conditioning when even their yacht has the luxury of cool air.

Was the logo for this show designed in 2004?

I have thoughts about this font!!

Why is he called John B.?

There are no other Johns in the show. You usually only use a last initial when there are multiple people with the same name. Why not just call him John? It’s a perfectly acceptable name on its own!