ANTIQUES ROADSHOW expert Alexandra Gill left the owner of a Bernard Dunstan collection red-faced after she had to tell the expert where she keeps the pricey paintings.

The BBC series visited Forty Hall in Enfield, London for an episode that aired recently.

One guest arrived hoping to receive an expert evaluation for her collection of paintings by the artist Bernard Dunstan.

But the owner was left mortified when expert Alexandra asked her where she stores the collection – before revealing they could fetch up to £6,000 at auction.

Casting her expert eye over the paintings, Alexandra began: "I’m thinking when I look at these first, what a lovely day for these four naked ladies.

"They are painted by the artist Bernard Dunstan, initialled in the corner there. 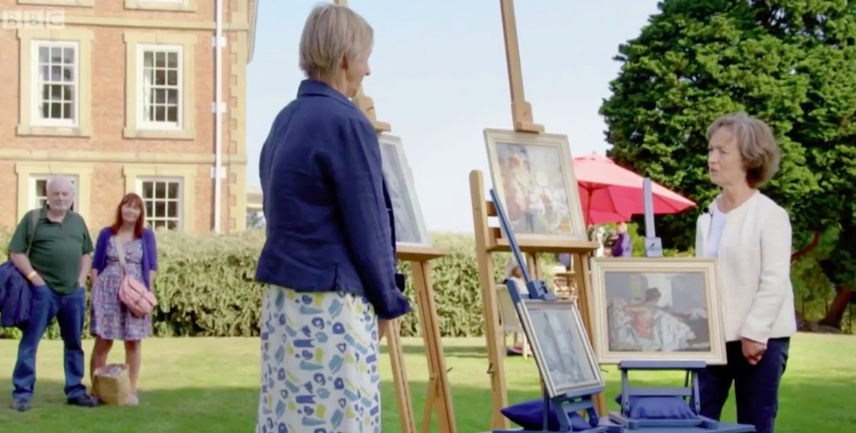 "And exhibited at the Royal Academy summer exhibition for most of his working career. How did you come by them?"

The owner explained: "Well the two there, my parents bought in a gallery in Folkestone where my grandmother lived and the exhibition was on and they came back with these two paintings."

Alexandra noted that one of the paintings had the artist's address on the back, to which the owner revealed: "Well, these two were subsequently bought from his home address.

"My parents went over there to look at some more of his work and came back with these two small ones.

"My sister remembers that mum and dad had coffee with him and his wife when they went over to his house."

The Antiques Roadshow expert commented: "What a really elegant way to shop," before asking if the owner displayed the pricey paintings at home.

But the guest was left mortified after revealing she didnt.

She told the expert: "I’m afraid to say they've been up in the loft in my house for two years," as Alexandra looked shocked.

"Will they stay in the loft?" the expert asked and the guest replied: “I really don't know.”

The guest then revealed she had bought two of the paintings for £78 and 15 shillings in 1967, adding: "but we don't have a receipt for these two."

She was then left stunned as Alexandra told her: "Well I think they've done all right since then, they’re probably going to make something in the region of £800 to £1,200 each."

Antiques Roadshow continues on BBC One on Sunday at 8pm.