BBC Breakfast: Naga says she was ‘put in place’ by Charlie

Naga Munchetty and Charlie Stayt joked around with each other once more on BBC Breakfast as they spoke about the recent snowfall in the UK. After viewing an image of an igloo sent in by a view, Charlie revealed he too had made one. As Naga teased Charlie over his anecdote, he complained to weatherman Matt Taylor he was being mocked.

After viewing the image of the igloo, Naga asked: “Have you made one, have you tried before?”

“I’ve been involved in igloo making in the past and what you do…,” Charlie replied as Naga clarified: “In this country?”

Charlie confirmed it was but wasn’t happy with his colleague’s reaction to his anecdote.

“It is quite shocking!” Naga insisted as she tried to defend herself. 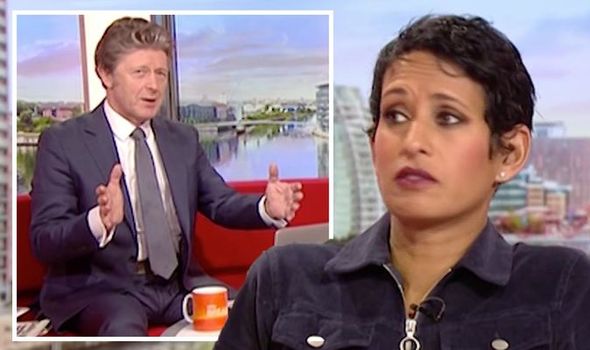 “If you let me tell the story!” Charlie demanded. “There was very, very heavy snowfall and ice and what you had to do first, was create bricks with the ice.

“And you have to build it around the top, it’s very difficult.”

But Charlie grew tired of Naga’s teasing as he turned to Matt and exclaimed: “Matt some people are suggesting I’m telling the glaringly obvious there.

“But I’m just trying to tell an interesting anecdote in the morning and I’m being mocked for it, what’s going on?”

“I was put in my place just to let Charlie speak,” Naga chipped in. “Which obviously I’m told a lot, but did you know igloos were founded by blocks of ice?”