Mark Labbett was back in the Chaser’s seat during Wednesday’s rerun of a classic episode The Chase. On hand to try and stop contestants Mik, Ewan, Sarah and Chris walking home with some life-changing cash, The Beast hoped his quizzing prowess would be enough for him to come out on top. However, during the very first round against Sarah, it appeared his eagerness to catch the ITV quiz show contestant got the better of him, and it didn’t go unnoticed by host Bradley Walsh.

Sarah was the first The Chase contestant to take on Mark and did rather well in her cash-builder round.

Racking up £7,000 in a 60-second time slot, Bradley and Mark were both impressed with Sarah’s performance.

And she continued her fine form into her head to head with Mark after refuting his lower offer of £1,000 and higher offer of £27,000.

After answering a number of questions correctly, Sarah’s efforts led to Mark jumping the gun when Bradley got to one of his later brainteasers. 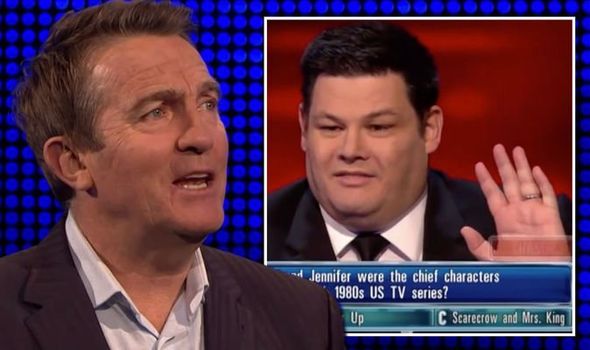 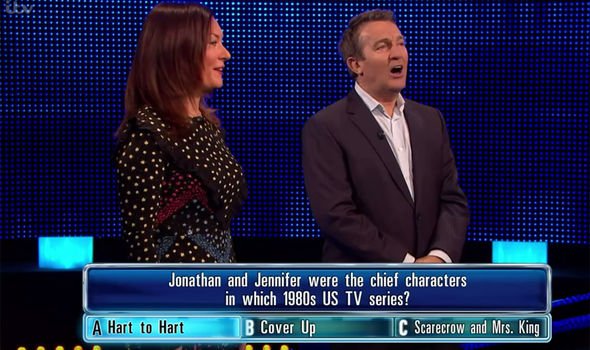 “Jonathan and Jennifer were the chief characters in which 1980s US TV series?” Bradley asked Mark and Sarah.

The quiz show host went on to reel off the possible answers: “A: Hart to Hart, B: Cover Up, or C: Scarecrow -“

But before Bradley could finish the final possible answer, Mark pressed his buzzer.

Stopping Bradley in his tracks, the timer began to count down while The Chase frontman got out the rest of the answer: “…and Mrs King.” 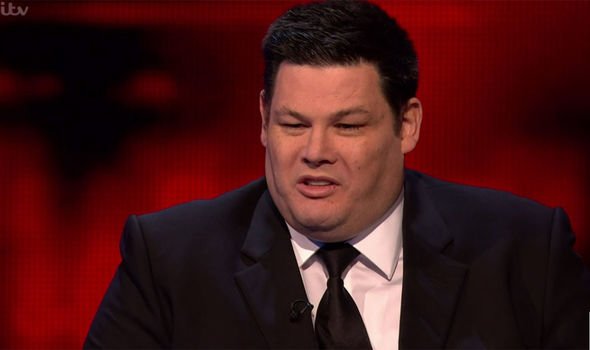 Once Sarah had locked in her own answer, Mark apologised for the seeming rule break and interruption to Bradley’s flow.

Holding his hand up, Mark said to the presenter: “Sorry.”

Bradley took to the opportunity to mock Mark for his slip-up, holding his hand up to his earpiece.

Ripples of laughter erupted in the studio as Sarah also let out a giggle while Mark sat with his arms folded.

“Oh, you know where to hit,” Mark said as he continued the joke. “Can’t I have a fine?”

As the host and Chaser moved on, it was revealed both Sarah and Mark were correct, and the player soon made it back to the Final Chase.

And she wasn’t alone as second player Ewan soon followed suit by besting Mark in their head to head.

In fact, Chris and Mik also outran The Beast in the face-offs, meaning the team had a “full house” in the Final Chase.

With £20,000 up for grabs, the team did their best to set an unbeatable score, but only racked up 18 steps.

Mark redeemed himself after losing out in the head to heads, catching the team with 28 seconds to spare.

The Chase continues weekdays at 5pm on ITV.