ITV viewers were thrilled to have Britain’s Got Talent back on Saturday nights as Amanda Holden, Simon Cowell, Alesha Dixon and David Walliams all returned to the panel to decide the fate of some of the nation’s most exciting talents. Tonight, one act will see the judges covering their mouths in shock after a thrilling performance inspired by their time in the marines.

Tonight’s episode will feature one particularly daring act, in the form of 35-year-old James Stott, an ex-marine from North Yorkshire.

His performance is not one for the faint-hearted as the crew set up a variety of devices on the stage, spelling danger.

Probing the act on his background, Simon Cowell asked him what his dream was, to which he replied: “I want to see how far I can push this.”

The judge urged James to reconsider, telling him: “Disclaimer here, I don’t want you to do this. Just in case something goes wrong, I have to cover myself.” 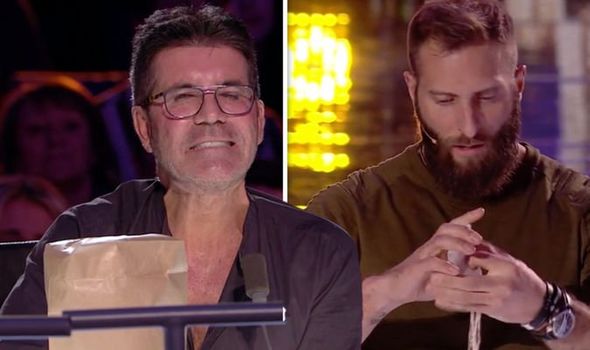 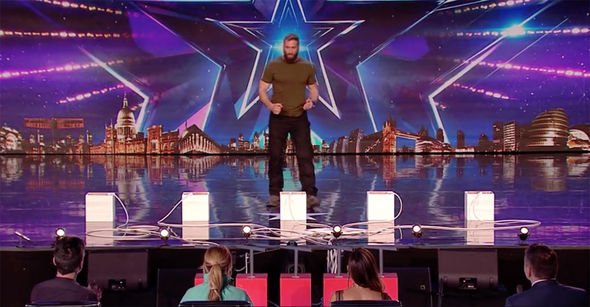 James agreed, as he got to work: “Tonight, I want to show you some very special skills I learnt in my previous job.”

The camera showed a production medic on standby, with Dec realising: “Oh, this is dangerous!”

The marine continued: “In my hand, I’ve got some tags, they’re lumbered one to six and I’ll give these a mix-up. Simon, I want you to select one tag – try not to let anyone else see the tag you choose,” he said, as he handed the props to the judge.

Simon selected the tag and James threw a curveball, pulling out a “razor-sharp dagger,” before giving further instructions.

“I want you to place the dagger underneath one of the bags on the table of the tag you’ve just selected.” 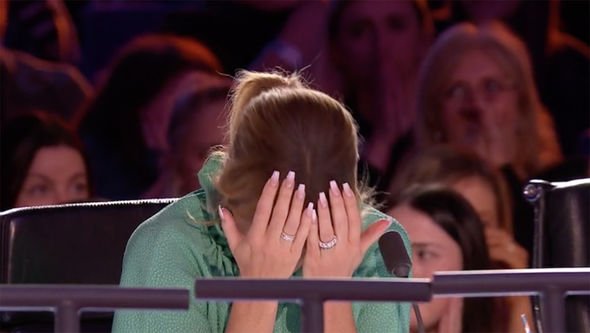 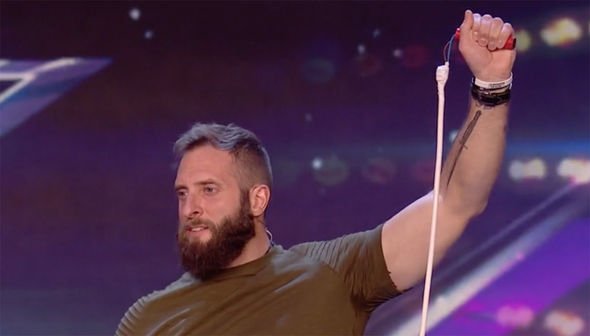 The judge placed it under bag number five before James told the panel: “I’m going to try and work out which bag you’ve selected using the skills I learnt in my previous job.”

James counted down six to one whilst watching Simon for his reaction, noting: “I saw a twitch on one particular number.”

He gradually put his hand over each bag in front of the judges whilst eliminating them, to the horror of the audience, managing to successfully save his hand from going through the dagger.

The attention switched to a video-tape of James which detailed his previous life, spending 10 years in the Royal Marines.

After the clip, he confessed: “Having this sort of sixth-sense, this intuition, has helped me in the past and I hope it’s going to help me again tonight.

“There are five plungers in front of the judges, they’re connected to these five boxes on stage. The cables come out of the boxes and are all mixed up so nobody knows – not even me – which plunger is connected to which box.”

He instructed Simon to come forward and push one of the plungers down, which exploded on stage as he told him to select another box.

Picking up the detonator, he told the audience: “This intimation is a test of bravery and some would say – pure craziness,” as he advised Simon further.

Simon chose box number two, and James told the judge to come forward and push plunger number two, before working his way through the remaining boxes.

The judge was left with box three and four, with James telling him to only push down one more when he had given him a thumbs-up.

Simon picked number three, and James revealed: “We are now 50/50 from potential disaster, my intuition is telling me something,” with the marine deciding to switch the cables around – putting it in his mouth and narrowly avoiding being blown-up on stage.

After his successful switch, he added: “Simon, there are some people who think this is not real,” but he detonated the remaining device before the audience burst into applause.

He concluded his act by saying: “I am the magic marine,” – will he make it through to the next round of the competition with his wild act tonight?

Britain’s Got Talent airs tonight at 8pm on ITV