Flaws and all, “Dave” is exactly the kind of first season you hope to see from a burgeoning writer, producer, and actor like Dave Burd. Alongside co-creator Jeff Schaffer (“The League,” “Curb Your Enthusiam”), the man behind Lil Dicky uses his first TV series to take big swings in content, perspective, and tone, pivoting from an episode about going viral by screaming “Somebody suck me!” (a la Jim Carrey in “The Mask”) to a half-hour dedicated to Dave’s hype man, GaTa (played by Gata), as he tries to honestly address his bipolar disorder. Not all the cuts connect, but when you don’t know how many at-bats you’ll get, you’ve got to take your shot.

So far, they’re paying off. “Dave” is pulling in astonishing viewership numbers thanks to the recently launched FX on Hulu venture, all but assuring more seasons of the FXX original series are on the way. Better still, the finale — along with most of Season 1’s back-half — makes it clear Burd knows he’s still learning and that he wants to improve. By showing Dave setting aside his ego and listening to his supporting team, Burd & Co. exhibit the most welcome version of meta screenwriting: exhibiting the kind of foresight and humility you love to see onscreen and off, especially from a series that’s just getting warmed up.

Over the last three episodes of Season 1, Dave gets courted (kind of) by record companies, lands a lucrative deal with a label, and books a huge PR opportunity thanks to his new A-list contacts (namely, Justin Bieber’s super-producer). But he also loses his girlfriend Ally (Taylor Misiak), infuriates his manager and friend Mike (Andrew Santino), and very nearly embarrasses the one man who will back him no matter what dumb shit he says (the increasingly lovable GaTa). By nimbly balancing these highs and lows, each subsequent episode illustrates the learning curve that comes with success. Dave’s professional life may be booming, but he’s losing his tether to reality.

Until the finale. After opening with an eight-minute music video that promises to be Dave’s downfall even as Dave promises it’s the best thing he’s ever done — the black record executive and his female colleague immediately elucidate every tone-deaf issue with Dave’s offensive musical narrative — Lil Dicky stubbornly pushes forward, threatening to back out of his contract and play the song on national radio. Despite pleas to reconsider from his entire team, the man whose tranquil speaking tones typically stand in defiance of the brash, ego-centric attitudes prevalent in rap doesn’t relent until he’s moments away from an embarrassment he may never live down. (That Dave can’t even provide lucid explanation for his more easily accepted flaws is a great way to crack his previously unpenetrable self-image.) But Dave finally hears his peers’ good advice, doesn’t play the track, and goes back to doing what he does best: rapping. Speaking honestly, Dave impresses the in-studio skeptics and cuts himself down to size in the process. 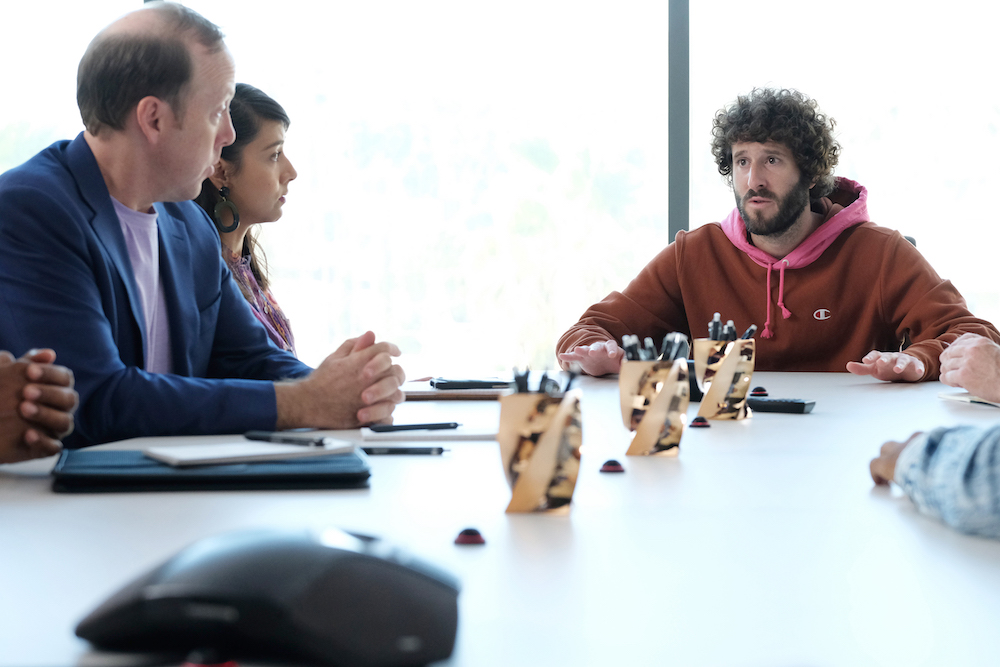 In other words, he finds success through humility. These last three episodes of “Dave” provide a clear picture of how easy it is to buy into your own hype, and they’re also among the best of the first season — particularly Episode 9, “Ally’s Toast,” which offers a tight script, a great performance from Misiak, and an honest emotional payoff. Other entries stand out for the wrong reasons: “What Wood You Wear?” focuses on supporting characters Emma (Christine Ko) and Elz (Travis “Taco” Bennett), who are secretly hooking up, but it doesn’t bother to say anything more than that. Earlier episodes are too obsessed with dick jokes or struggle to demonstrate that Dave is growing distant from his own identity; at first, it just felt like we were getting to know the real Dave, who was a bit too full of himself and distracted by his own ambition, but the later episodes make clear his ego was becoming a problem from the jump.

Anytime a first season ends stronger than it begins is a good sign, but it’s particularly exciting in success — and “Dave” is seeing incredible success. On FXX alone, Season 1 is averaging just over 200,000 viewers per episode. In comparison, long-running FX transplants “It’s Always Sunny in Philadelphia” and “Archer” are pulling closer to 300,000 for their latest seasons on the sister network. But across all platforms, including the streaming views via FX on Hulu, “Dave” is now clocking over 5 million per episode. Not only does that speak to great word of mouth but also the importance of FX’s partnership with Hulu. Lil Dicky grew to stardom thanks to the internet and his audience skews younger. Before FX made its programming available to stream the next day on Hulu, those fans wouldn’t have had an easy way to watch online. Now that they do, FX is seeing their continued investment in young, exciting talent come to fruition.

While FX is undoubtedly over-the-moon with these numbers, executives behind the prestigious, awards-loving brand have to be just as excited that Dave Burd and Jeff Schaffer are focused on making their hit show the best it can be. Sure, separating reality from fiction with a meta, semi-autobiographical story like this can be confusing, and the Season 1 finale could solely show that Dave, the character, is ready to accept his teammate’s help going forward. But it sure seems like Dave’s self-awareness goes hand-in-hand with Burd’s, and there’s plenty of reasons to believe “Dave” Season 2 will knock it out of the park.

“Dave” Season 1 is now available to stream via FX on Hulu.