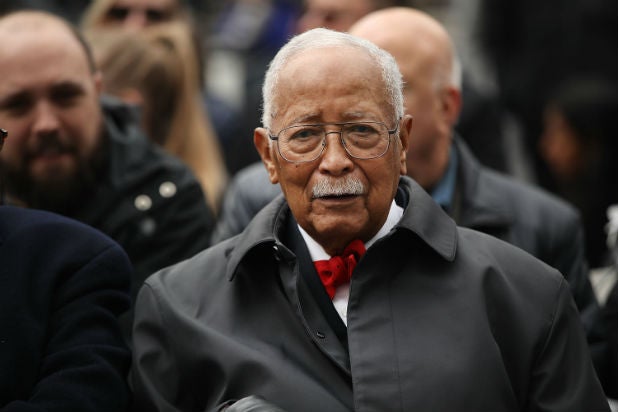 David Dinkins, the 106th Mayor of New York and to date the only Black person to serve in the role, died Monday from undisclosed causes. He was 93.

According to the New York Post, which first reported the news, Dinkins died in his home late Monday night. And NBC reported that he died just over a month after his wife of 67 years, Joyce, died.

Born in Trenton, New Jersey in 1927, Dinkins served in the US Marine Corps from 1945-47 and then studied mathematics at Howard University. Graduating in 1950, he went on to attend law school at Brooklyn Law School, graduating in 1956 after which he settled in Harlem.

While maintaining a private law practice until 1975, Dinkins became involved in Democratic Party politics during the 1960s while also acting as an investor and entrepreneur, most notably as an investor in the black owned broadcasting company Inner City Broadcasting Corporation in 1971.

In the 1970s Dinkins’ political career advanced. From 1972-73 he served as president of the New York City Board of Elections, followed by a 10-year stint as New York City clerk that ended in 1985. Elected Manhattan borough president in 1985, he ran for mayor in 1989, narrowly defeating Rudy Giuliani who, in what is now a historical irony, conceded on election night with only a difference of 50,000 votes between them.

But Dinkins entered office just as a historic 30-year rise in crime rates was cresting. And though crime decreased every year he was in office — in part due to initiatives he spearheaded to increase the size of the New York City Police Department and keep schools open later at night — he was blamed by the media and his political opponents for what was still a sky high crime rate. In addition, the nationwide recession during the presidency of George H.W. Bush also caused a spike in unemployment in the city. As a result Dinkins was narrowly defeated by Giuliani in their 1993 mayoral rematch.

Following his defeat, Dinkins joined the faculty of Columbia University where he remained up to his death.