Director surprises his former “E.T.” star on her birthday episode 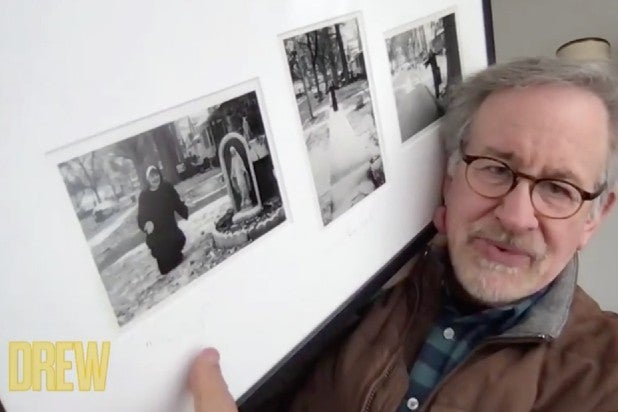 Drew Barrymore got a surprise blast from the past for her birthday Monday, when her godfather, Steven Spielberg, virtually stopped by her talk show to share an apology gift she gave him after she appeared in Playboy.

After posing for the January 1995 cover of Playboy, the “E.T.” director sent Barrymore a quilt that said “Cover up,” along with a copy of the layout that he literally covered up with paper doll cutout clothes. “Because that’s what parents do!” Barrymore exclaimed as Spielberg explained himself.

In response, Barrymore — who was only 7 years old when she starred in Spielberg’s classic, “E.T. the Extra-Terrestrial ” — sent him a series of photos as an apology. In the shots, she was dressed as a nun in front of a church, seemingly “repenting” for the shoot. Barrymore captioned the photos “I’m sorry,” “I’ve seen the light” and “I’m on my way” respectively. The photos still hang in Spielberg’s home.

The interaction came in honor of Barrymore’s 46th birthday Monday, with Savannah Guthrie taking over hosting duties of “The Drew Barrymore Show” for the tribute. The two discussed Spielberg’s role in Barrymore’s life, leading her to get emotional, telling Guthrie, “Yeah, he’s like the first person I knew cared.” Guthrie then revealed Spielberg’s surprise appearance, resulting in Barrymore breaking down into tears.

“Oh Drewface, I still care about you,” Spielberg said. “I’ve always cared about you ever since the first time this little blonde hurricane walked into an audition in my office and took us by storm and then took the entire world by storm. That was you then and that is you today.”

An emotional Barrymore told him that he is one of the people that means the most to her, who she always turned to for support and guidance. “I always thought every time I was doing something good or right, I would always think about how you would think or feel about it because I loved making you proud. I lived to make you proud.”

Check out the full clip below: