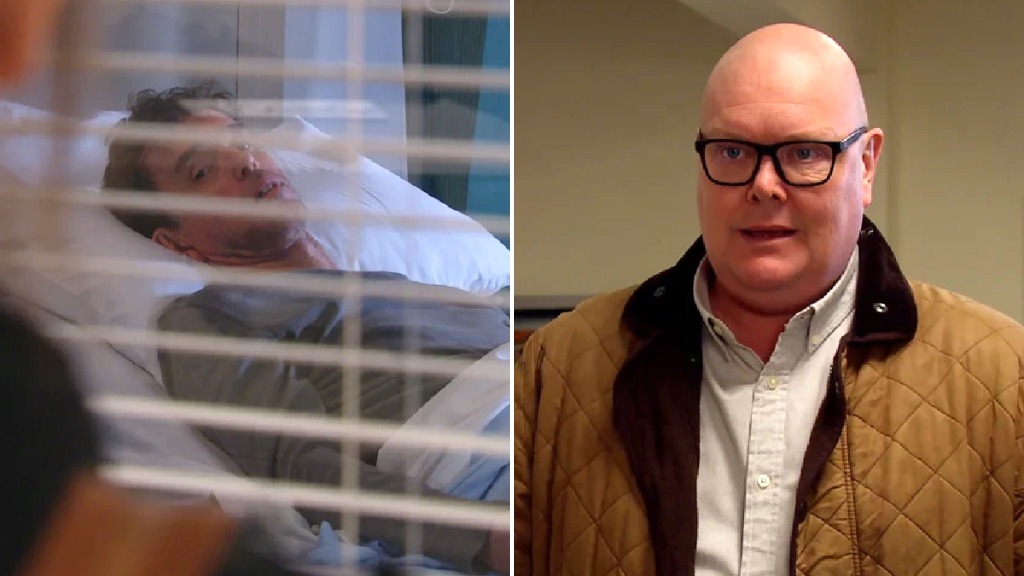 There were some seriously heartwarming scenes on tonight’s Emmerdale, as best mates Paddy (Dominic Brunt) and Marlon Dingle (Mark Charnock) were reunited properly for the first time since the latter suffered a stroke.

When Paddy first saw Marlon shortly after he underwent an operation last week, he was deeply affected by his pal’s fragile state. In scenes that made us all weep, Paddy begged the old Marlon to come back to him, and hasn’t been able to bring himself to visit since.

Rhona Goskirk (Zoë Henry) grew angry with Paddy for his avoidance tactics as he insisted he was needed at home as well as the vets’ surgery. He promised to do better; but having recorded an awkward message on the Dingles’ short film for Marlon, Paddy was mortified as he continued to find Marlon’s illness tough.

When Rhona encouraged him to go and see Marlon as the Paddy he knew and loved, he finally headed back to the hospital. Beginning their visit with the kind of daft small talk he is known for, Paddy rambled on about the quality of the coffee and the fact that he had just bought a belt. As you do!

By the time Paddy got to explaining away his cringeworthy appearance in the video, he was making movie references – at which point Marlon stopped him in his tracks. He may not be able to talk in full sentences right now, but nobody can shut Paddy up like Marlon!

Eventually, Paddy apologised for being so absent and weird, to which Marlon uttered: ‘always’. Paddy laughed, and when he called himself selfish, Marlon held up five fingers to rate his selfishness as a ‘5 out of 5’.

Just like that, the pair’s friendship was stronger than ever, and there were moving scenes as Paddy told Marlon just how much he meant to him, before assuring him that they would ‘smash’ his recovery together.

Later, there was even time for a bit of mischief as Paddy read from a book of offensive poems to make Marlon laugh – until nurse Gail (Elizabeth Boag) arrived to slow down their antics.

As he left, Paddy promised he would be back, and Marlon placed a hand to his own heart to convey a message of love to his friend. Paddy returned the gesture before quickly leaving, clearly keen not to let Marlon see him cry once again.