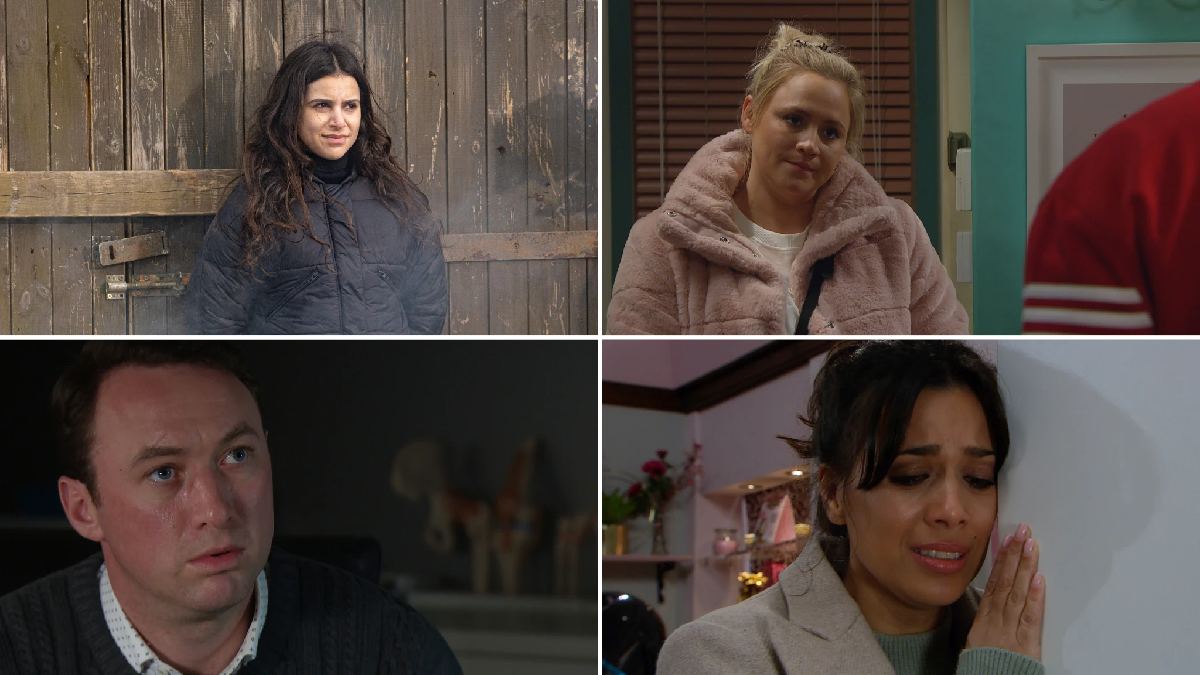 There are deadly situations as Meena Jutla (Paige Sandhu) unleashes her final act of violence in Emmerdale.

Trapped and with a barn filling with fumes, Manpreet Sharma (Rebecca Sarker) and Vinny Ashdale (Bradley Johnson) have seemingly no escape.

Elsewhere, it’s the end of the road for Tracy Metcalfe (Amy Walsh) and Nate Robinson (Jurell Carter) as she makes a huge decision.

Manpreet fills in Vinny on Meena’s previous victims. Terrified, Vinny reassures Manpreet that they’re both going to be fine.

Later, Meena injects Manpreet with more drugs and wheels in an IV set-up. Vinny is left terrified, knowing that the end might be near.

Tracy asks Nate to look after Frankie whilst she goes to her PND seminar. Nate is thrilled to see that the atmosphere between the two is beginning to thaw.

Jai goes to Take A Vow and asks Leyla to get Priya back working in the office.

Liam is perplexed to discover that Meena’s medical records do not mention her pregnancy or miscarriage.

Liam’s concerns about Meena grow when he sees blood seeping through a dressing on her wrist. When Liam reveals that he knows about Meena’s fake pregnancy, she’s disconcerted.

Meena threatens to accuse Liam of sexually harassing her at the surgery Christmas party if he continues digging into her business.

Returning to the barn, Meena informs terrified Vinny and Manpreet that Liam’s interference has escalated her plans and as such, today will be their final day alive.

Tracy tells Charity she has been offered a new job in Nottingham but she worries about the disruption to her personal life. Tracy is galvanised by Charity’s support when she encourages her to take this opportunity.

Priya is determined on her first day back and her confidence increases. But struggling with the discomfort from her burns, Priya is stressed out when a forceful and unhappy client barges in on the warpath.

Tracy’s heart is pulled in two as she sees the pain on Nate’s face when she tells him that she and Frankie are moving to Nottingham for her new job.

Wrongfooted and angered, Nate reels from Tracy’s revelation about leaving the village. Eventually, after Nate undermines her about her ability to cope in a new city, Tracy’s insecurity resurfaces.

Elsewhere, Jai and Kim reel from the £100,000 Health and Safety fine they’ve received for the accidents at the survival challenge.

Meena drives the Dingle van into the barn. As she closes the barn doors, Manpreet and Vinny are terrified, aware there’ll be no escape from the exhaust fumes coming from the vehicle.

Meena continues to terrorise as Manpreet and Vinny’s lives hang in the balance.

Priya is on the ball as she fields Cassie’s inquiries, but her urge to scratch her scars gets the better of her. When she exits the salon, she’s distressed to overhear Cassie making light of her scratching.

Noah confides in Amelia and she’s heartened that Noah sees her as a friend.

Lives are in danger as Meena continues her reign of terror – can anyone come to Vinny and Manpreet’s rescue?

Tracy makes a decision about her future after her showdown with Nate – can he talk her round?

Elsewhere, Jai is crestfallen when his application for a loan is not accepted.

Vanessa once again attempts to persuade Tracy to stay in the village.