This month’s picks include films about fighting for survival, the thrill of revenge and brazen hackers. 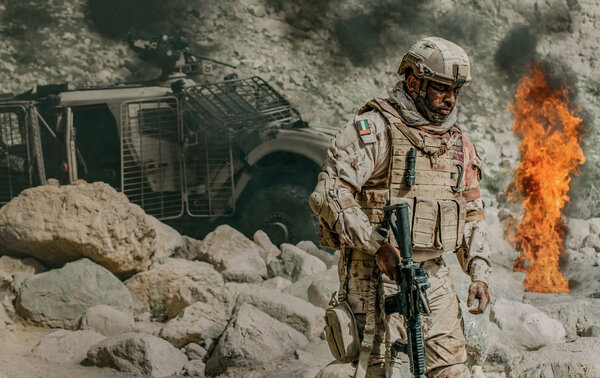 When films about conflicts in the Middle East make their way to America, they’re usually told through the eyes of Americans. It’s refreshing then to find a stirring movie like “The Ambush” (its Arabic title is “Al Kameen”), which offers a different side. This story, based on true events according to the filmmakers, follows a platoon of soldiers from the United Arab Emirates who are ensnared by Yemeni rebels in the claustrophobic confines of a canyon.

The harrowing film, from the French director Pierre Morel (“Taken”), is a near-nonstop barrage of fierce combat. The cinematographer Thierry Arbogast (“The Fifth Element”) captures the haze of traded bullets with palpable clarity; the composer Harry Gregson-Williams (“The Last Duel”) provides a searing, affecting score; the use of slow-motion adds further drama as each man protects the other in a life-or-death struggle to return home. In the fog of war, with this sturdy ensemble, emerges a human story of brotherhood that demands your attention.

Stream it on Tubi.

A weekend getaway to the woods for Ray (Oscar Tucci) and his mistress, Brooke (Marlene Malcolm), goes awry when three country hunters kidnap the couple to a private island for sport. Bearing similarities with “The Most Dangerous Game,” the director Neil Mackay’s movie is a throwback survivalist thriller harkening to days of grindhouse cinema.

Though the pursuit of the couple by these pleasure-seeking killers inherently provides suspense, once the script, written by MacKay and Sean McAulay, turns to Brooke, the film conjures giddy intensity. Brooke transforms from vulnerable eye candy to a deadly pursuer who strikes with the ferocity of an animal backed into a corner. This common trope is given new life by Malcolm, who makes Brooke’s evolution believable through a tactile physical performance that takes advantage of every bead of sweat and every speck of dirt on her body.

Stream it on Tubi.

Set in the near future, “Dead Zone,” from the director Hank Braxtan, is a pandemic allegory nestled in a zombie thriller. In it, Michael Jai White and Chad Michael Collins play leaders of an elite military unit dispatched to recover a rumored vaccine designed to protect against a virus that’s rendered half the population into fast-moving, flesh-eating monsters known as “runners.”

The full-body armor adorned by the actors is reminiscent of the video game “Halo,” while the overall concept recalls Zack Snyder’s “Dawn of the Dead.” The practical gore of mutated flesh and copious amounts of blood, imbues the sharply choreographed fights between zombies and soldiers with an overwhelming pulse. But it’s the unique creature design that’s sure to excite zombie enthusiasts. Not only do these fast-moving predators in turn grant the film a brisk pace, the grimy creature design, whereby each zombie uses a tongue with teeth to debilitate their victims, will permanently crawl into your memory banks.

‘Kingdom: Ashin of the North’

A small northern village exists precariously between two warring factions in the Korean director Kim Seong-hun’s 16th-century set film, a prequel film to the “Kingdom” television series. The titular character is a young girl (Si-ah Kim) caring for her ailing mother. When a bevy of mysterious murders of Jurchen people leaves a hill of mutilated bodies in the woods, Ashin’s working-class father is enlisted by a Joseon commander to avert conflict with the Jurchen by spreading a lie about a killer tiger. The fib, unfortunately, has the opposite impact, thrusting Ashin’s vulnerable village toward danger.

In its first half, the film, written by the “Kingdom” creator Kim Eun-hee, operates as a stirring war flick composed of intricate swordplay and elaborate strategies by opposing sides. Once tragedy befalls Ashin, however, the narrative fast forwards. She is now an adult (played by Jun Ji-hyun), working for the Joseon as a spy in the hopes of harnessing revenge for her fallen friends. As the methodical and determined Ashin, Ji-hyun brings a fully felt intensity. By the time the film morphs into a zombie movie, the sudden change is perfectly natural and welcomed. We devour her appetite for destruction as she dismantles an army with a few arrows and some ginseng in a finish that’s gruesome and unnerving, and well earned.

Mel Bandison (Holly Mae Brood) is a hacker wunderkind working as a contractor to test the efficiency of corporate computer systems. One such client has a bug in the coding of their self-driving bus fleet. As a temporary fix, Mel inserts a Trojan. This work around, however, will have dire consequences for her. She is soon framed, by virtue of a deep fake, with murder and is forced on the run with Thomas (Geza Weisz), her dopey date from the previous night, to search for her fellow hacker and mentor Buddy Benschot (Frank Lammers), the one man who can clear her name.

Written by Hans Erik Kraan and Tijs van Marle, “The Takeover,” from the Dutch director Annemarie van de Mond, bears several similarities to “Enemy of the State” in the way it interrogates how new technologies are furthering contemporary surveillance states. As the computer-savvy Mel, Brood is the calm center of a film filled with espionage and back-stabbing. And the film’s smart narrative choices imbue the mundane act of typing with potent drama. It all climaxes with a large, sprawling set piece on the streets of Rotterdam, involving a runaway bus speeding toward a treacherous bridge. Edited by Fatih Tura to sustain a breakneck pace, the scene provides an action-packed, heart-stopping finish.