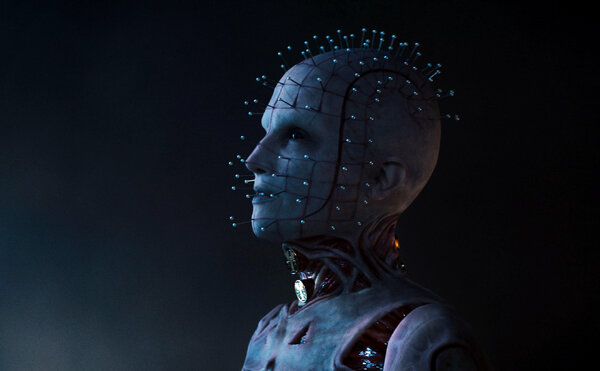 With its potent blend of sadomasochism, blasphemy and body horror, Clive Barker’s “Hellraiser” (1987) was a genuinely disturbing dip into deviance that multiple sequels failed to replicate. Taking another shot, the suits behind this reimagined “Hellraiser” smartly handed directing duties to David Bruckner, whose résumé might be brief, but whose gift for injecting dread — even into otherwise inert projects — is apparent.

Here, Bruckner reveals a new talent: holding his own against practical effects (by a team led by Josh and Sierra Russell) so spectacular that the movie’s lack of a theatrical release is almost criminal. A visual and ideological upgrade on the original, “Hellraiser” centers on Riley (Odessa A’zion), a frazzled addict in her 20s who gains possession of a mysterious puzzle box belonging to Voight (Goran Visnjic), a degenerate millionaire. Configured correctly, the box opens a portal to another dimension, releasing ghoulish creatures called Cenobites who delight in taking the human desire for extreme sensation to its logical conclusion.

More intricate and more numerous than their forbears, the Cenobites threaten to steal the show. In particular, Jamie Clayton’s performance as their leader (a role memorably originated by Doug Bradley) has a menacing eroticism that underscores the movie’s thematic focus. Less notable are Riley’s sidekicks, a ho-hum bunch that quickly squanders our patience. And a slack, overlong middle section inside Voight’s mansion — itself an intricately designed puzzle — cries out for a more ruthless editor.

As an ambitious allegory for the chaos and torment of addiction, “Hellraiser” works mainly because of A’zion, who gives her scattered character a deeply human desperation. For Riley, demons from hell are hardly scarier than the ones she fights every day.