If you were to Venn diagram Sunday night’s Insecure, it would start with Molly’s mom having a stroke, intersected with Issa going to her bestie’s apartment with Nathan and promptly losing Molly’s dog.

This would be followed by Issa saying she loved Nathan without him saying it back, with the final circle encompassing her crushing run-in with Lawrence, Condola and their baby boy at the hospital.

In other words, it doesn’t take a statistician to figure out Issa is stuck in a love rut. She’s trying to move forward with her new boo thang Nathan on the HBO romcom, but can’t seem to shake her old one, no matter how hard she tries or how many times she professes her love for someone new.

This doesn’t mean Nathan doesn’t love Issa back. He did drive her to the hospital and Molly’s place so she could help her BFF. Nathan also told Issa’s mom that he’s her boyfriend, when even Issa hadn’t slapped on that title. But by not saying how he felt when Issa needed to hear it the most, Nathan created a layer of vulnerability and uncertainty for Issa that will reverberate throughout the next three episodes.

And does Issa really love Nathan? She said it, but she didn’t mean to and in that regard, you could argue Issa isn’t in love with Nathan but she loves the way he supports her. That’s a love of convenience only a rebound can provide. 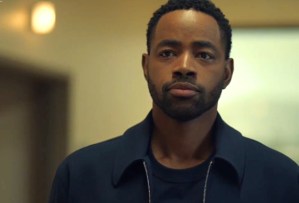 With all that insecurity floating around poor Issa, it’s no wonder seeing Lawrence left her winded. Condola was enjoying a routine life event — taking their son to the doctor — Issa once envisioned having with her ex. Shocked into immobility, Issa stared just a little too long, which allowed Lawrence to look up and lock eyes with her. It was in that moment that Issa realized she had been gazing longingly and tried to course correct by awkwardly walking away, church-finger style.

At least Issa looked good. She was wearing one of Molly’s outfits, after all. But Lawrence wasn’t looking at her clothes. He was looking at her face and it mirrored his in sadness and resigned acceptance. 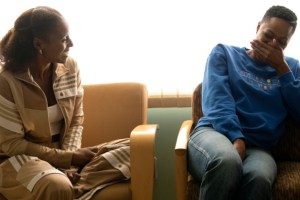 It’s kind of like what Issa told Molly before she left to go get coffee and ran into Lawrence. “S–t is gonna happen how and when it wants to, but all of this is out of our control anyway.”

Much like that earthquake, Lawrence’s turbulent flight and now Carol’s stroke, there are more aspects in life that we can’t bend to our will than those we can.

What did you think of Episode 5 of Insecure titled “Surviving, Okay?” Drop your thoughts in the comments.