Amazon Prime Video’s “Invincible” is cause for celebration: the Robert Kirkman comic book adaptation not only offers the first hourlong, adult animated superhero series — in all its graphically violent glory — but it’s also wrapped around a single dramatic narrative. This makes it uniquely compelling, particularly in comparison to the MCU and DCEU.

“It was a hard sell and I give Amazon the credit for taking a chance on this because it hadn’t been done before,” Kirkman, who serves as series creator, said. There were no restrictions when it came to violence and gore, and the show’s popularity with the comic book fan base and beyond has resulted in the streamer greenlighting two more seasons, allowing Kirkman to continue turning the animated superhero story completely on its head.

“Invincible” revolves around 17-year-old Mark Grayson/Invincible (voiced by Steven Yeun of “Minari” and Kirkman’s “Walking Dead” series), who struggles with his dual identity and battling his superhero father, Nolan/Omni-Man (voiced by J.K. Simmons), who’s basically a sleeper agent from the planet Viltrum bent on controlling Earth. It’s very much a subversive “Superman” riff for Kirkman. “It’s not only an inspiration but the idea of Superman and Kryptonians having ill-intent toward the Earth is possibly a more modern take on that kind of story,” he added. “The father figure having a dark secret and how it affects Mark’s life after looking up to him is really the basis of this story.” 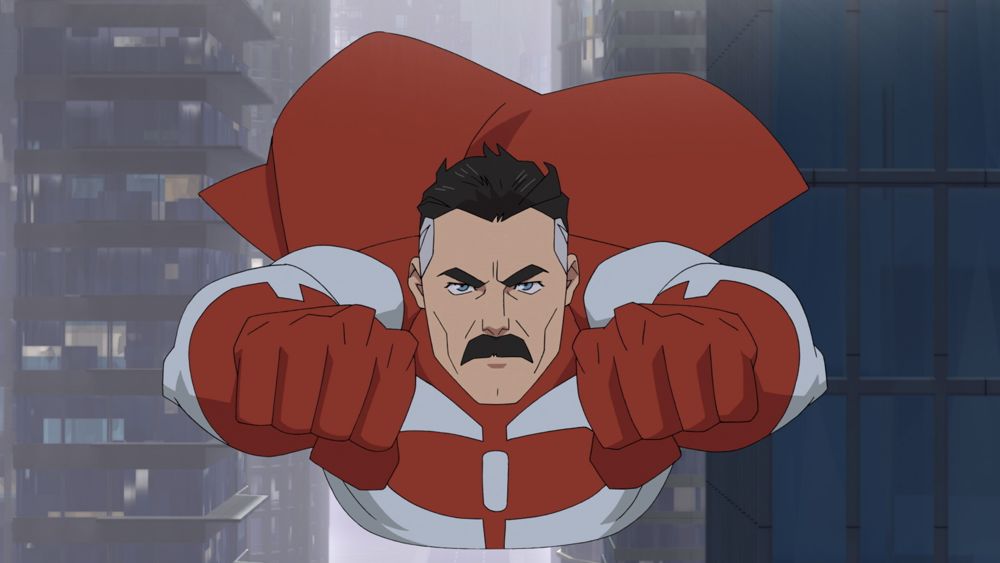 However, the 2D series (predominantly animated at Korean studio Maven Image Platform) departs from the 144-volume comic book saga in several respects. First, the big reveal that Omni-Man is the villain comes at the climax of the first episode (“It’s About Time”) rather than much later. This enabled Kirkman to thwart expectations from the outset and waste little time setting up the crucial father-son conflict. “We held back a little in the comic book series to its detriment,” he admitted. “I knew it was something I wanted to push up to give a real sense of what the show was, and having the bulk of that episode being lighthearted and showing [the Guardians of the Globe superhero team] in action took it in one direction before we make that pivot.”

And what a pivot. Omni-Man inexplicably turns on his team and brutally kills them in a long and bloody fight. “I wanted to deliver something completely different,” Kirkman said. “And having them put up a good fight and disabling Omni-Man for a few episodes heightened the tension and added to the mystery about why he killed them. Was he being controlled? I wanted to push the fight as much as possible with the intensity and gore. I wanted it to be jarring.”

Although the comics already contained some ethnic diversity — for instance, the imposing Black criminal enforcer, Titan, is voiced by Mahershala Ali — Kirkman was keen on being even more inclusionary in the series, with Yeun’s Grayson, his mom, Debbie (voiced by Sandra Oh), and supercharged Rex Splode (voiced by Jason Mantzoukas) all redesigned to reflect their ethnicity. Additionally, Grayson’s girlfriend, Amber Bennett (voiced by Zazie Beetz) is now Black, while Green Ghost (voiced by Sonequa Martin-Green) and Shrinking Rae (voiced by Grey Griffin) have been swapped from male to female. 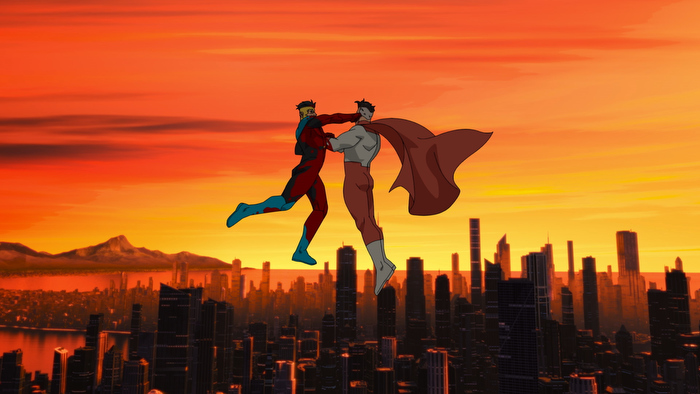 “The diversity of this show, I think, is very important,” Kirkman said. “In everything I do, I’m trying to best represent the world around us. I found the comic series to be lacking and so the show improved the diversity. Any opportunity to push a character to be diverse, to broaden the diversity of overall cast, is very easy to accomplish. And yet I’ve rediscovered them through these actors in some really cool ways, and it’s affected how I think about these characters.”

Meanwhile, for producer and co-writer Simon Racioppa, it was important to stay as close to the comic book series as possible, with Invincible coming of age under the influence of the superhero Teen Team, while leveraging the advantages of animation to accommodate the size of the cast and the scope of the locations. That included the more elaborate fight in the second episode (“Here Goes Nothing”), with Omni-Man destroying a whole planet, which Racioppa scripted. “I wanted to do something stylistic and thought about ‘300’ and the bombastic,” he said. “I wanted to use color and light and chiaroscuro to make a point. Because on that one we could play with the lighting on another planet and we could make it more graphic and comic book-y.

“We wanted to show that you have no idea what Omni-Man’s limits are. What cemented it, though, was the music, which was an electronica song, ‘Tom Tom’, by a Toronto group called Holy Fuck, which was remixed by composer John Paesano. The first fight was small and personal, the second was a threat directed at civilization.”

And the third fight in the Episode 8 finale (“Where I Really Come From”) is even more epic. It lasts nearly 20 minutes with Omni-Man beating up Invincible when his son refuses to join him. The three-part evolution was worked out meticulously by Kirkman, Racioppa, the storyboard team, and the animators. At first, Omni-Man tries to teach him a lesson, then he tries to convince him that resistance is futile, and, finally, he engages in total war. 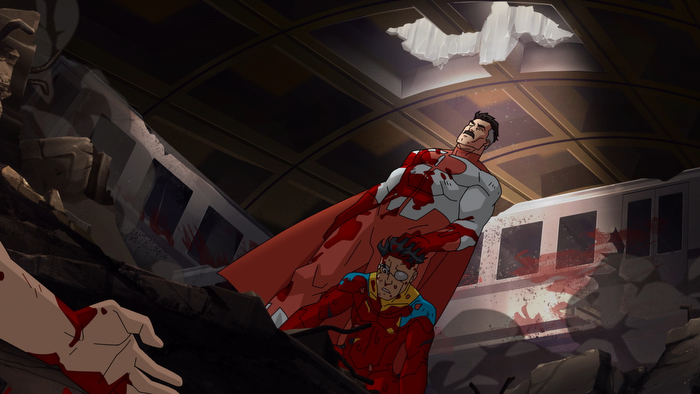 “You try to make sure that there’s an evolution to the fight and everything’s escalating,” Kirkman said. “There’s the fight in the clouds, the fight with the jet, the taking down of the buildings, the train sequence, then there’s some more air stuff, then you’re underwater, then you’re in the mountains. As long as you have those transitions, you’re not going to get bored.” Turns out, Kirkman was inspired by a video essay about the tanker fight in “Indiana Jones and the Last Crusade,” where Harrison Ford’s Indy fights baddies on the tank and prevents it from falling off the side of a cliff.

“It really detailed how each of those moments had their own narrative and stakes that were built into this perfect sequence,” added Kirkman, “and how that continuous tension was always ratcheted up to the next level. Having that broken down opened [my] eyes to what you need to do for one of these long, drawn out sequences.”

But it’s the continual grappling with mortality that propels “Invincible.” “If you hadn’t seen the Guardians of the Globe lose their lives, that fight between Nolan and Mark wouldn’t have the same weigh to it,” Kirkman said. “One of these two very important characters could die in this scene. You need that intensity. But the idea of having new relationships forming between characters is [promising]. And a side adventure for Mark that’s not in the comics is what excites me.”