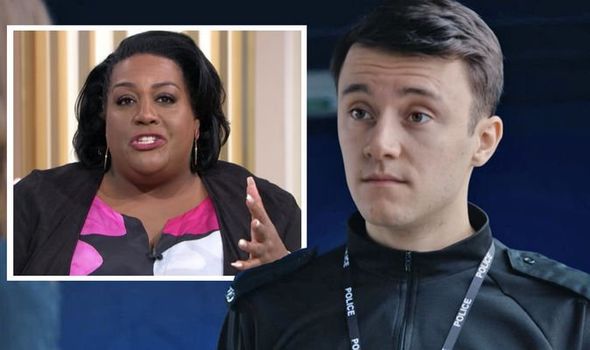 Line of Duty fans were quick to call out Alison Hammond for a mistake she made during an interview on This Morning with the actor who plays PC Ryan Pilkington. ITV viewers heard the presenter ask Gregory Piper about his character and whether he was going to kill someone. Those who have been following the popular British crime-drama since the very beginning know about Ryan’s involvement with the OCG and the deaths they have carried out. To add to this, Alison also wondered whether Gregory was a “method actor”, something which he quickly cleared up.

Dermot O’Leary said: “First things first, you are smashing this series, you must be loving it!”

“Yes, its absolutely incredible, crazy, can’t get my head around it,” Gregory replied.

Dermot continued: “I think for people who don’t know Line of Duty, the incredible thing was you were in series one, how old were you in series one?” And the actor revealed he was 13 years old.

“You weren’t in the next couple of series, then they bought you back in the last series with Stephen Graham and now you’ve infiltrated the police and working for the OCG what a great role to have and have had all these years,” the presenter remarked.

“Not a method actor at all. Everyone’s so lovely as soon as you say ‘cut,’” Gregory said.

Those watching at home were quick to suggest Alison hadn’t done her research.

Taking to Twitter one wrote: “Alison Hammond should really do her research or watch the show before interviewing she asked Ryan if he’s character was ever going to kill somebody…. Errrrrrrrrrr yeh about 3 people #ThisMorning #LineOfDuty.”

“Alison said the actor playing Pilkington ‘do you think you will kill someone’ Obviously not watched it , Dermot looked shocked,” another wrote.

A third added: “Would help if Alison on @thismorning could research before she interviews on the show… asking Gregory Piper from line of duty if he one day will kill someone? Sorry this interview is awkward to watch clearly not watched line of duty?”

“Alison has just asked someone who’s character has killed another character if he’s a method actor to get into the part! #ThisMorning,” a tweet read.

One fan added: “Did Alison Hammond just asked if an actor’s character would kill someone & then followed up by asking him if he’s a method actor to get in to character. Needless to say the actor said no!”

“Alison hasn’t watched Line of Duty and is  pretending she has and is talking word b*******… #ThisMorning,” a viewer mentioned.

Someone else pointed out: “Alison obvs doesn’t watch as he’s already killed someone in the lake! #ThisMorning.”

Line of Duty airs weekdays at 10am on ITV.