Bill Nighy stars as a buttoned-up bureaucrat transformed by a grim diagnosis in this drama by the novelist Kazuo Ishiguro, adapted from an Akira Kurosawa movie. 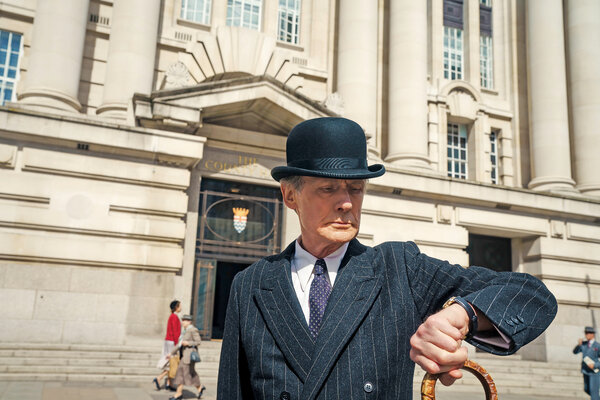 There is a coziness to “Living,” despite the fact that it revolves around death. It’s not a holiday movie, at least not explicitly, but like “A Christmas Carol” and other Yuletide ghost stories, it’s a film that steps back to consider the rituals and routines we perpetuate, the ways we’ve changed since the last break. And the ways we haven’t.

“Living,” directed by Oliver Hermanus from a screenplay by the novelist Kazuo Ishiguro, is an adaptation of Akira Kurosawa’s drama “Ikiru” (or “To Live”). That Japanese classic from 1952 stars the great Takashi Shimura as a drab Tokyo functionary who learns he is terminally ill and begins to question his life.

Ishiguro has called “Ikiru” a formative work for him. His books (which include “Never Let Me Go” and “The Remains of the Day”) limn the crisis of confronting one’s own life with newfound clarity, of perceiving the ways in which it is fraught and one’s complicity in its corruption. With “Living,” Ishiguro — a British writer whose parents moved the family from Nagasaki to Surrey when he was five — infuses his beloved parable with nostalgia closer to home.

“Living” transposes “Ikiru” to a gloomy postwar London filled with buttoned-up men of dignity; bowler-hat-wearing worker bees who commute in and out of the city with the solemn demeanor of churchgoers. One of them is Williams (Bill Nighy), a cadaverous bureaucrat and the intimidatingly austere head of the Public Works Department. The film opens on a new hire’s first day, but the young man’s illusions are quickly dashed when his new boss, a total gentleman at first glance, proves to be an inert leader. A group of women with a petition asking for the construction of a new playground are kicked around the building — this is under that department’s jurisdiction, no, that one — because no one wants the hassle.

Thinking of Nighy and holiday releases, Williams is the total inverse of Billy Mack, the washed-up rocker whom Nighy played in “Love Actually.” Where Mack is lovably sleazy, the creaky Williams is inhibition personified. The chipper Margaret (Aimee Lou Wood), the sole female employee of Williams’s wing, calls him “Mr. Zombie.”

When Williams’s doctor tells him he only has a few months to live, his subdued response is both devastating and absurd: “Quite,” he mutters.

As with the protagonist of “Ikiru,” Williams is transformed by the news. First, he turns to a local bohemian, Sutherland (Tom Burke), for a boozy tour of the city’s nightlife. Then he spends time with Margaret, a lively companion who gets him in trouble with his son and daughter-in-law, who are convinced the old man is having an affair. Eventually, he finds something to believe in, and alters his legacy in the process.

At its worst, “Living” wallows generically, employing an overbearing piano score as the camera repeatedly sits with Williams’s sadness to diminishing effect. Though, captured by the cinematographer Jamie D. Ramsay, there’s also a warmth and twinkle to Williams’s existential plight; as in a David Lean movie, passion mingles elegantly with repression, and Williams emerges as a kind of romantic figure, a man shocked, then delighted, by the thrill of finding himself.