Meghan Markle and Prince Harry have been warned the publication of the biography ‘Finding Freedom’ is likely to widen the divide with the Royal Family. The biography focuses on the relationship of the Duke and Duchess of Sussex up until they stepped back from their royal careers in March. Daily Mirror royal editor Russell Myers told ITV’s Lorraine the couple may have to wait a while before being allowed back into the royal folds because of the book.

Asked whether ‘Finding Freedom’ could make things “worse” for the couple, Mr Myers said the situation remained “bad” as no member of the Royal Family emerged unscathed from the book.

Despite the Queen keeping the door open for Prince Harry and Meghan to resume their royal duties in the future, the royal expert suggested any return will not be for “quite a while.”

The Duke and Duchess of Sussex announced in January they had chosen to step back from their roles within the Royal Family to focus on establishing themselves as financially independent from the Crown.

The couple embarked on their new adventure in March after a final seres of engagements across the UK. They have since settled down in Los Angeles with their son Archie Harrison. 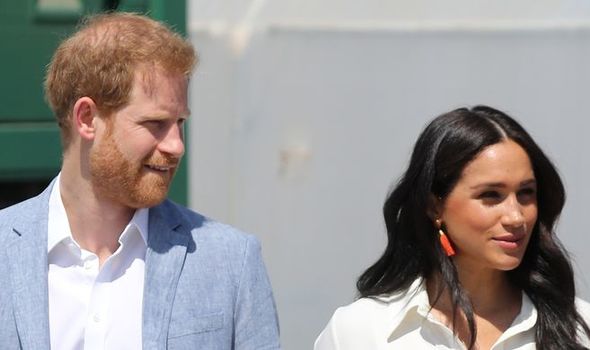 The sensitive claims made in the biography have sparked speculation about a potential close collaboration of the couple with the authors.

But a representative for Harry and Meghan in July denied any suggestion the Duke and Duchess worked with authors Omid Scobie and Carolyn Durand at any point during the drafting process.

Scobie and Durant both have also insisted they heavily relied on the support of friends of the couple rather than Meghan and Harry themselves.

Speaking to Good Morning America, Scobie said: “I know there’s a lot of speculation about the couple having sort of given secret interviews for the book and having weighed in, but it really couldn’t be further from the truth.”