Loose Women is known for fiery scenes often occurring between its stars and today was no different. However, things got particularly intense this lunchtime when Saira Khan and Nadia Sawalha appeared to intensely disagree on the first topic of the ITV show, The Social Dilemma. The Netflix film has garnered worldwide attention after exploring the dangerous impact of social media. But with Nadia and the rest of today’s panel taking the film very seriously indeed, Saira wasn’t so quick to agree with its content, despite not having watched it.

How is Boris Johnson handling the coronavirus crisis? Vote in our poll

Today’s panel saw host Andrea McLean joined by Saira, Nadia and Linda Robson as for the last instalment of the lunchtime show this week.

But Nadia and Saira soon entered into a clash over the new Netflix documentary film, which explores accounts from those who used to work in Silicon Valley.

Saira, who admitted she had not watched the film, did not agree with the themes which suggested humans were out of control in their use of technology.

She said: “Every single platform that is mentioned on that programme: Google, Facebook, Twitter, they are all free platforms. 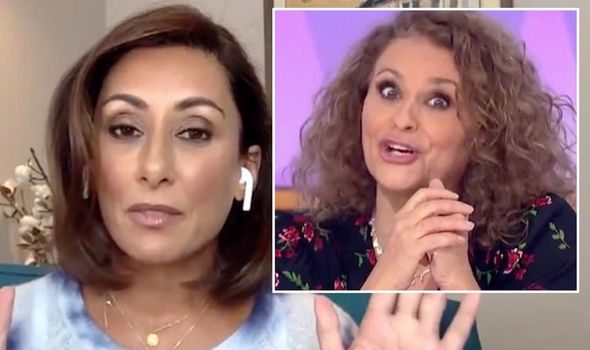 “This is a personal choice for you to go in and take part and when you take part, every single platform gives you security notifications and you can turn them on and off.

“It gives you privacy settings, so if you are not engaging in the whole application and you’re just mindfully going on about it, you need to take personal control,” the Loose Women panellist stated.

But Nadia soon showed her opposing stance, hitting back: “But Saira, you need to watch the film because you haven’t watched the film.

“Yes, I agree with what you’ve said but when you watch the film and you watch the level of control, it’s way beyond – how many people are actually completely in control?”