Rumors are heating up that Nicole “Snooki” Polizzi is joining The Real Housewives of New Jersey following her shocking exit from Jersey Shore: Family Vacation.

The pint-sized reality TV star would be a great addition to the Bravo franchise. Snooki isn’t afraid to speak her mind, she likes to drink wine, and she doesn’t put up with any crap.

Over Labor Day weekend, speculation ran wild that Snooki was trading in drunk days with her roommates for day drinking with the RHONJ ladies. Snooki shared a video of her with friends and family in Barnegat Bay in New Jersey around the same time as Teresa Giudice, Dolores Catania, and Jennifer Aydin, sparking rumors.

The four ladies were not on the same boat, nor were cameras filming either group.

After a week of the rumors running rampant, Snooki set the record straight on Instagram.

“Idk how this started, but I have not been asked to be a housewife. Sowwyyyyy,” Snooki responded to a post talking about her joining RHONJ.

CommentsbyCeleb caught not only Snooki shutting down the rumors, but one of the RHONJ stars commenting on Snokki’s response.

Yep, fans are not the only ones sad there is no truth to Snooki becoming a housewife. 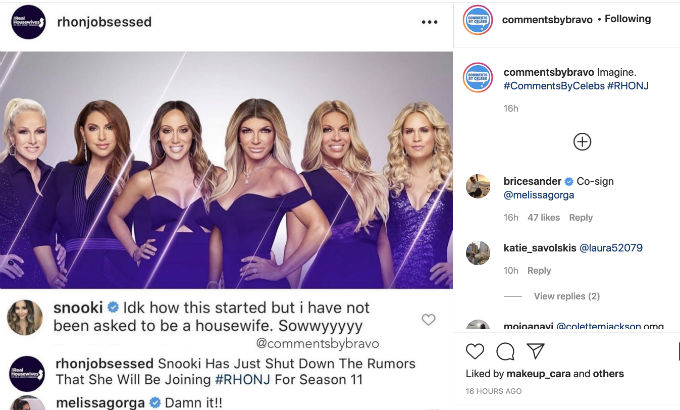 Snooki is an RHONJ fan

This is not the first time rumors have had Snooki joining The Real Housewives of New Jersey.

In February 2015, Snooki jokingly shared what her tagline would be if she ever joined the Bravo show. Fans assumed that meant she was making an unofficial announcement, which was not the case.

The Jersey Shore alum admitted that she was a huge fan of the show but had no desire to be part of it. Snooki declared the show was not what she wanted to do with her life. Her reason still seems to be true today.

Nicole “Snooki” Polizzi let fans know last winter that she was giving up reality television – at least for now. She declared it was too hard to be away from her children to film Jersey Shore.

Joining a show like RHONJ would not require Snooki to be away from her family for weeks like Jersey Shore did. She could even include her family on the reality show if she wanted.

However, Snooki has never indicated she wanted to put her family into the reality TV world. Her husband, Jionni LaValle, does not like the spotlight. He rarely even allows his wife to put him on her social media feed. She does feature her kids on social media, but reality television is a whole different ballgame.

Sorry, Snooki fans, she is not returning to reality TV right now.

The Real Housewives of New Jersey is currently on hiatus at Bravo.