“The multiverse” is a concept linked with “Rick and Morty” more closely than maybe any other show on TV. When trouble’s brewing, a leap to an alternate reality is almost certainly around the corner. So it’s equal parts surprising and exciting when the show manages to craft itself an episode-spanning problem that’s self-contained. In this week’s “Mortiplicity,” all that havoc is weirdly both confined to a single idea and sprawling so wide that Rick has to take a quick breather to draw up a diagram and explain. All of it adds up to an exquisite execution of a deceptively simple idea. It’s the best the show has been in a while.

“Mortiplicity” starts with (what seems like) a standard Smith dining room volley of ambitious plans, family insults, and unexpected visitors. As does happen sometimes, the intruders wipe out the breakfasting quintet before they can even get out of the room. This attack sets off a wave of nested showdowns between Decoy Families (those that Rick has placed in strategic locations) and the families who assume that they’re the ones at the top of the chain, responsible for eliminating all the fake versions of them below.

As these encounters start to complicate themselves, with Decoys making their own Decoys, that chain starts to branch out in the wildest of ways, with links of every size and shape traveling in every direction. Before long, fake Smiths start mutating to the point where they all realize they’re the very thing they’re trying to hunt.

Like last week’s season premiere, “Mortiplicity” is proof that the show is at its most enjoyable when it’s paced just right. This doesn’t necessarily mean “tear through enough plot and branching timelines in a way that will have Reddit timeline constructors going berserk for weeks,” but here that’s more of a natural byproduct than a driving goal. For as much chaos as there is in this Mandelbrot set of fractal clone warfare, it’s all outlined in a way that’s surprisingly clear to follow despite the overall story going into overdrive. When sets of families are firing lasers at each other across the Smith house (or a version of one, anyway), it’s easy to identify one as the Living Room set and the other as the Kitchen set. They may have nearly identical personalities, but episode writer Albro Lundy sets up an attacker/defender dynamic in each of these smaller battles that gives purpose to each new wrinkle.

“Mortiplicity” is very careful to only play the “Wait, which one’s which?” card in calculated situations. That the answer is “It doesn’t matter because they’re all about to get neutralized by an interdimensional molecule zapper” certainly helps. (It wouldn’t be a top-tier “Rick and Morty” without a heaping helping of nihilism.) Even in those repetitions, there’s a constant escalation happening that gives this episode the perfect kind of forward momentum. 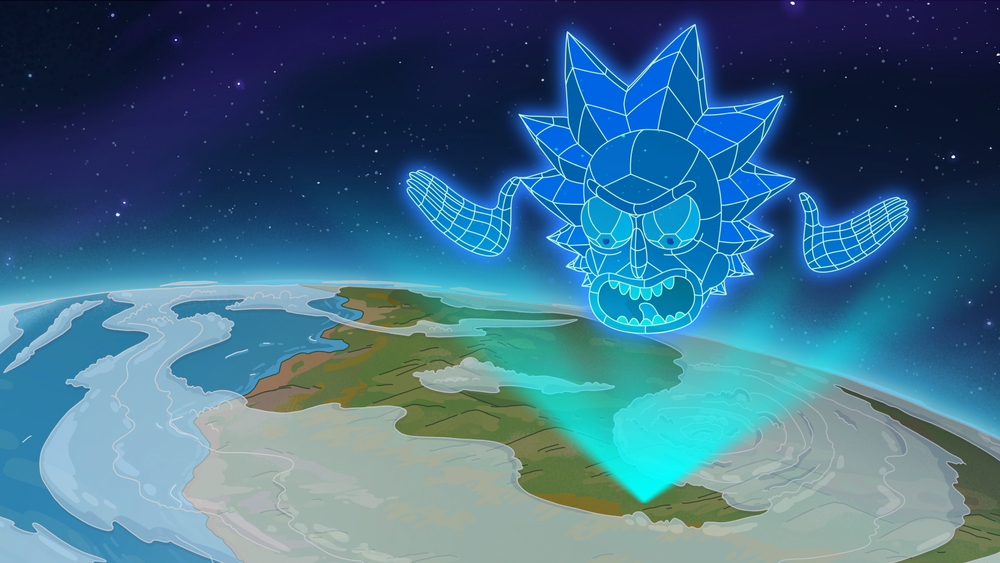 There’s also admirable restraint in “Mortiplicity” by not going after the low-hanging pop-culture clone story fruit. There’s no overextended Michael Keaton riff when the concept of degenerating “copy of copies” decoys comes up. In line with the rest of the episodes, the quick “Westworld”/“Ex Machina” two-fer becomes a way to differentiate between families while also calling out Rick’s referential tendencies. If anything, Rick pausing to explain his own “Highlander” joke is the closest the episode comes to getting sidetracked, but it’s also being delivered in front of a whiteboard illustration that anyone can choose to unpack instead.

It’s no coincidence that one of the show’s best episodes in years keeps the entire family together. Maybe it’s weird to say that every Smith family member gets a chance to shine, given that one of Summer’s spotlight moments is her slowly plunging a dagger into the chest of someone who looks just like her. Still, seeing Marionette Beth in charge of the underground resistance and Marionette Jerry becoming a breeding ground for a colony of beavers in that truly deranged extended tag are ideal ways to give the usual Rick/Morty dynamic a needed break.

Having four-plus seasons of this show under its belt is also a built-in advantage. The Smith family are no strangers to being confronted with themselves, so “Mortiplicity” actually ends up benefiting from everyone just going with the premise that people who look like them are bent on their destruction (and that the objective is mutual). With the time that saves, the episode can make room for little treats like the bucket list conversation (on behalf of everyone else who shares your wish, Jerry, we see you and you are loved) and the montage of Decoys all discovering their non-human parts. (Correct me if I’m wrong, but how has it taken this long for a Rick to operate on his own brain?)

The skill demonstrated here isn’t just in the written setups and payoffs, but in Lucas Gray’s direction, too. The execution of the Giant Blue Geodesic Hologram Rick (assuming that’s what the name of the inevitable Funko Pop is going to be) is as much of a delight as the Leatherface Rick’s skin lair is horrifying. (Seriously, between this and that one “Hannibal” episode, we’re good on “demented torturers slowly separating people from their own flesh” plotlines for another decade or so.) The one-two punch of the Sesame Street Smiths’ existence and the reveal that they’re giant mascot suits as part of a ploy to be too cute to be annihilated is about the point when “Mortiplicity” proves that it’s about to sustain its high-concept balancing act for the entire runtime.

There’s even a Keith David cameo! That’s like having a tiny, perfectly portioned dessert after a hearty meal. Not only that, but no other detail goes unwasted. You could make the argument that Mr. Always Want to Be Hunted is a Mr. Poopybutthole decoy of his own — if you’re gonna steal, steal from the best — but how was the show going to introduce a character like that and not pay off the name? The pairing of him and the episode’s first joke (“We’re gonna kill God”) is the most thrilling kind of opening to a story: one that tells you everything that’s about to unfold before you even realize it.