Steph, 38, was back on hand to host the fourth edition of Steph’s Packed Lunch, having launched the Channel 4 show earlier this week. So far, things have gone to plan with minimal disruption but Thursday’s instalment saw proceedings thrown into chaos when the presenter ventured out of the studio. As the host spoke with the owner of some rather tame chickens, the poultry suddenly changed their tact when the broadcaster decided to pick one of them up. 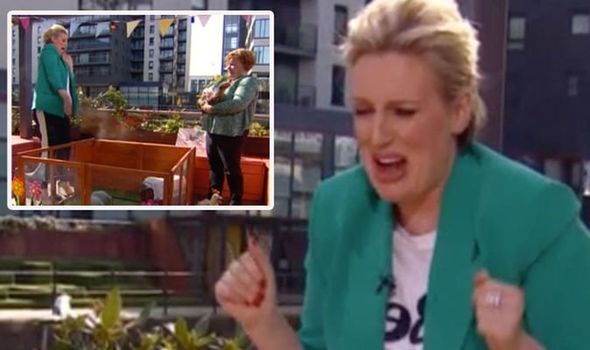 The presenter was rather sceptical to start with as chickens roamed freely around the set, asking the owner: “Do I not need to panic?”

Her guest assured her she would be fine and to begin with, the chicken she opted to handle was quite calm as Steph stroked its feathers.

However, when it had enough of being manhandled, the poultry started to fiercely flutter its wings which meant the presenter screamed in terror.

After losing control, the host let go of the bird and dropped it whilst she tried to regain her composure.

Not only did she issue an apology to the owner of the chickens, but she also said “I’m sorry” to the viewers watching the chaos unfold.