Fans of The Office are still able to binge watch their favorite Jim and Pam, Michael Scott, Andy and Angela (and Dwight and Angela) storylines from the beloved sitcom before it stops streaming on Netflix. Alums Jenna Fischer and Angela Kinsey have been revealing some behind-the-scenes secrets of the NBC comedy on their podcast “Office Ladies,” and a recently released book on the show also provides some fun facts from cast members and producers.

Actor Ed Helms, who played the lovable Andy Bernard, shared a particular memory that seemed to activate his gag reflex. 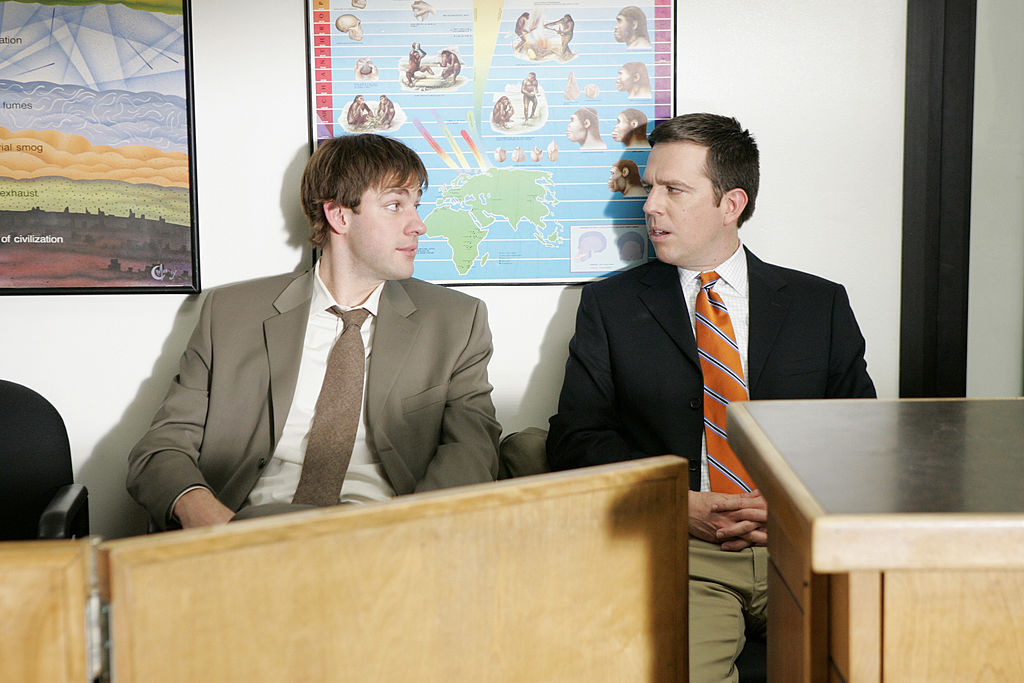 ‘The Office’ stars head to the beach

At the end of Season 3, the employees of Dunder Mifflin took a break from The Office and headed to the beach. Entitled “Beach Day,” the episode features Michael (played by Steve Carell) taking his staff on a field trip where he conducts a series of games to see which person would make the best replacement for him if he received a promotion he applied for in the New York office.

“As soon as [showrunner] Greg [Daniels] and I landed on the idea that Michael would choose a successor we thought, ‘How we he do that?’ ” writer Jen Celotta told Andy Greene for his book The Office: The Untold Story of the Greatest Sitcom of the 2000s. ” ‘Oh, he would absolutely have a Survivor-like competition that’s just ridiculous.’ “

Brian Baumgartner, who played Kevin Malone through the entire series, recalled “Beach Games” as being a pivotal episode.

“This is a big moment not just for the season, but for the series,” Baumgartner commented. “We’re putting everything forward and having several people in the office now competing for this job and really solidifying that the CEO is kind of an important character.”

RELATED: ‘The Office’s’ Dark Storyline Involving Michael Scott That Was Scrapped: ‘I Had To Put A Stop To That’

Dunder Mifflin deals with the elements

When it came time to find the location to shoot the episode, the producers wanted something that resembled the dreariness of the Dunder Mifflin office.

“We were like, ‘We need to find a lake that’s the lake equivalent of The Office, like the bleakest lake we could find,’ ” Celotta shared. “So we went to an area called Hansen Dam.”

Baumgartner remembered having to film for hours in the scorching heat with temps dropping at night. “This episode for the actors should have been called ‘Temperature Day,’ ” he said. “The whole week was all about temperature, whether it was 98 degrees on the bus or freezing at night.”

The production staff did what they could to accommodate everyone amidst the extreme elements. “It was so hot during the day and everyone was dying,” Celotta told Greene. “We had these little fans and then at night there were heat lamps. The temperature change was crazy.”

RELATED: ‘The Office:’ Why John Krasinski Wore a Wig in Season Three

One specific game Michael inflicted on his staff was a hot-dog eating contest, which actress Kate Flannery called “the toughest part of the day.”

Helms had his own memories of that particular scene and the work that went into it, which actually made him sick to his stomach.

“What I remember is eating tons of hot dogs and spitting them into a bucket,” Helms recalled. “For me, the act of spitting chewed food out of my mouth activates my gag reflex. It was so upsetting.”

The Office star described the nauseating visual that came along with putting the scene together. “The worst part is the prop folks are walking around with a big plastic bucket and like four people are spitting into it. You have to spit out, but you’re looking at other people [doing the same thing]. It’s just disgusting.”

In honor of National #ReceptionistsDay, leave a few 💼📝📎 for Erin!

Apparently, even studio execs found the display repulsive. “The suits were so profoundly uncomfortable,” Helms said. “You had to lean against things. We did take after take.”

Despite the unsightly spectacle, “Beach Games” is still considered a fan favorite episode.

RELATED: John Krasinski May Have Given ‘The Office’s’ Jim and Pam a Shout Out in ‘A Quiet Place’