It’s well known at this point that the theatrical version was released after much behind-the-scenes drama: Zack Snyder found himself fighting over the creative direction of the movie with the studio, which was anxious for an “Avengers”-style hit that would be the beginning of a billion-dollar franchise. Fed up and grieving the recent loss of his daughter, Snyder walked away during postproduction; Joss Whedon, who’d already been brought in to add touches of humor to the screenplay, finished the job. Although the resulting movie earned more than $650 million worldwide, it was lambasted by critics and disappointed fans. Their vocal campaign to #ReleaseTheSnyderCut persuaded HBO Max, an arm of WarnerMedia, to let Snyder do just that.

It took him four years, $70 million, and hundreds of hours of shooting and editing to finally realize his vision. This isn’t simply a director’s cut. It’s an altogether different movie.

Free of cringe-inducing gags about podcasts and alien probes, the movie feels liberated from a certain brand of popular mainstream filmmaking and more like the work of one artist: Snyder, who clearly takes this superhero stuff very seriously. It emphasizes big emotion and earnest, heart-on-sleeve displays of masculine feeling.

Snyder has said he never saw the version of “Justice League” that Warner Bros. released, but he is aware that most of what he’d intended to put in the film was changed or discarded. Although the broad outline — Batman (Ben Affleck), Superman (Henry Cavill), and Aquaman (Jason Momoa), among other comic book heroes, band together to defend the earth from the evil alien Steppenwolf (Ciaran Hinds) — remained the same, Snyder’s distinctive style was made unrecognizable.

Whether you love Snyder’s style or hate it, it’s clear that this version, divided into six chapters and an epilogue, is all Snyder, uncut and uncompromised.

What Has Been Added 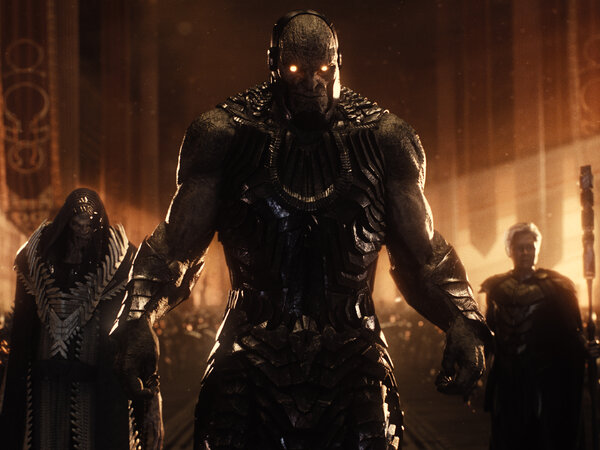 The director’s love of balletic action and big, slow motion set pieces is on display in a number of new sequences, including a striking, snow-dappled high school football match that sets up Victor Stone, a.k.a. Cyborg (Ray Fisher), and an alternate introduction to the Flash (Ezra Miller), whom we now meet using his super speed to save the would-be victims of a car crash. (In the Whedon cut, he’s drawing on a bully’s face with a pen.) An entirely new villain called Darkseid, meanwhile, is depicted with menacing grandeur, smoldering extravagantly before towers of flame as he conspires to enslave the planet.

Some of the most immediately noticeable changes are essentially amendments or corrections. Whedon’s reshoots with Cavill, for instance, were ridiculed at the time for some incredibly wonky C.G.I. mustache removal, which made his chin look like Plasticine. The actor’s face, in the Snyder Cut, has been restored to its ordinary flesh-and-blood glory.

There are new cameos from, among others, Vulko (Willem Dafoe), the Martian Manhunter (Harry Lennix) and Lex Luthor (Jesse Eisenberg). Some of the Whedon version’s less convincing visual effects shots have been redesigned or fine-tuned, and the aspect ratio in which the movie is presented has been altered from a conventional wide-screen format to a the boxier, eye-catching “academy” ratio, which, Snyder said in an interview last week, he had always wanted “from the start.”

Snyder is known for staging scenes to popular music, and his cut is littered with new needle drops. A moment in which Aquaman chugs a bottle of whisky and struts from a dock into the roiling sea strikes a forlorn note with a Nick Cave song, where it formerly had the trailer-friendly rock jam “Icky Thump.” Another moment is set to a plaintive cover of Tim Buckley’s “Song to the Siren.”

The Snyder Cut’s four-hour running time greatly expands on a plot that in the theatrical version felt cursory and rushed. Much more context is provided to explain the origins of the Mother Boxes (all-powerful devices with distinctly Freudian undertones whose theft imperils the world and sets this story in motion), as well to clarify the motivations of Darkseid and his horned minion, Steppenwolf, whose efforts now have an added dimension of centuries-old vengeance. There’s also an in-depth flashback revealing former battles between the forces of good and evil, and two extended dream sequences showing the fate that might befall the world should the bad guys prevail.

The film now also has time to elaborate on character back stories that the Whedon cut was forced to sketch faintly, if at all. The greatest beneficiaries are Cyborg and the Flash: neither made much of an impression previously, but together they are the heart of the Snyder Cut. Fisher’s performance, as a broken young man trying to hold on to a glimpse of hope, is sensitive and surprisingly nuanced, and Cyborg in particular is compelling now that the character has room to breathe.

In the Whedon version, Victor is a teenager who transforms into a human-robot hybrid more or less spontaneously. We don’t learn all that much about him, and his powers are never well-defined and don’t make much sense. In the Snyder Cut, we see him in flashbacks losing his mother in fatal traffic accident. He’s estranged from his father (Joe Morton), a top scientist specializing in alien technology, who uses one of the Mother Boxes to turn Victor into Cyborg after the crash.

Even his father has been fleshed out and now feels fully three-dimensional — a change that pays off at the end of the second act, when he sacrifices himself to help his son. “The mothers played a big part in ‘Batman v Superman: Dawn of Justice,’ and we had it in our mind that this one would be about fathers,” Snyder said in the interview. “The sacrifice of the father is the thing we wanted to come through.”

What Has Been Deleted

For as much new material as has been added to the Snyder Cut, the biggest differences are in what’s been removed. Whole scenes conceived and directed by Whedon have been taken out, including almost all of the slapstick comic interludes, whose upbeat, madcap tone felt at odds with the seriousness of the rest of the picture.

Gone is the early sequence in which Batman strings up a crook on a rooftop to entice an alien out of hiding, as well as a later, painfully unfunny scene in which Aquaman, inadvertently sitting on Wonder Woman’s Lasso of Truth, begins to confess his secrets and share his feelings about his crew.

One of Whedon’s first jobs on the film, before Snyder left, was to add jokes that were spliced into Snyder’s first cut of the film. Quirky, irreverent sitcom riffing is ubiquitous in Marvel’s superhero blockbusters, but in the middle of “Justice League,” it felt incongruous.

Snyder has excised Whedon’s punch lines, so that the Flash no longer kids about brunch and Superman, back from the dead, no longer jokes about his coffin itching. In Whedon’s version, after Batman is beaten to the ground by Superman, he dryly quips, “Something’s definitely bleeding!” In the Snyder Cut, he just stays down, bruised and broken.

There is an early scene in which Affleck’s Bruce Wayne visits Iceland, where Aquaman is hiding. Turning down his offer to team up, Aquaman tells Wayne, “The strong man is strongest alone.” In the Whedon version, Wayne fires back, “That’s not a saying — that’s the opposite of what the saying is!” In the Snyder Cut, Wayne has no retort. Whether you agree with the sentiment, it feels like an improvement that the movie at least accepts its own ethos. If nothing else, the Snyder Cut is no longer rife with such contradictions.

A New Ending and an Epilogue

A refined finale in meltdown-ravaged Russia leans into the emotional undercurrent threaded throughout the movie. The heroes still battle Steppenwolf inside a nuclear reactor, but instead of the Flash being relegated to a passive role saving civilians, as he is in the Whedon cut, he now must race around the city building speed to allow Cyborg to enter the Mother Boxes before they finish merging and allow Darkseid to dominate the world. And instead of Steppenwolf simply being pummeled by the newly resuscitated Superman, the villain’s evil plan momentarily succeeds, leaving it up to the Flash to move so quickly that time actually reverses. It’s an emotional sequence, and the stakes feel much higher than the Whedon version’s limp fisticuffs.

After separating the Mother Boxes and vanquishing Steppenwolf, our heroes enjoy a brief celebratory denouement, before the Snyder Cut moves into its final chapter — a 40-minute epilogue that sets up enough action for another trilogy of sequels, despite the fact that there is no plan to follow through with those. Lex Luther, absconding from the Arkham Asylum to a luxury yacht, courts the mysterious Deathstroke, another bad guy of comic book lore. They talk about wanting to kill Batman and share a champagne toast.

In a final vision of the future, Bruce Wayne dreams the world has come to ruin. He and a motley crew of heroes are roaming the apocalyptic landscape, “Mad Max”-style, and for some reason have the Joker (Jared Leto) in tow. After Superman appears with an evil glint in his eye, Wayne wakes up at home in bed, where he is visited by the benign alien Martian Manhunter.

It’s a lot to take in at the end of an already long film, but Snyder said he “felt like it needed that coda” to finish the movie right.