Bridgerton is the latest Netflix series to take the world by storm and it’s a period piece set in England during high season. It’s about the debutantes looking for marriage, and Daphne Bridgerton is the diamond of the season, setting off to gain a husband to secure a good life and hopefully become a mother.

However, things don’t particularly turn out how she plans, and of course there’s a lot of good drama that unfolds. It is a Shondaland show, remember. It’s fun and a good show to pass the time this early in the year.

For star Phoebe Dynevor, there was one scene that felt vastly different to film that it came across on screen, though. Which actually taught her a lot, through her character of Daphne Bridgerton. [Spoiler alert: Spoilers ahead for all of Bridgerton Season 1]. 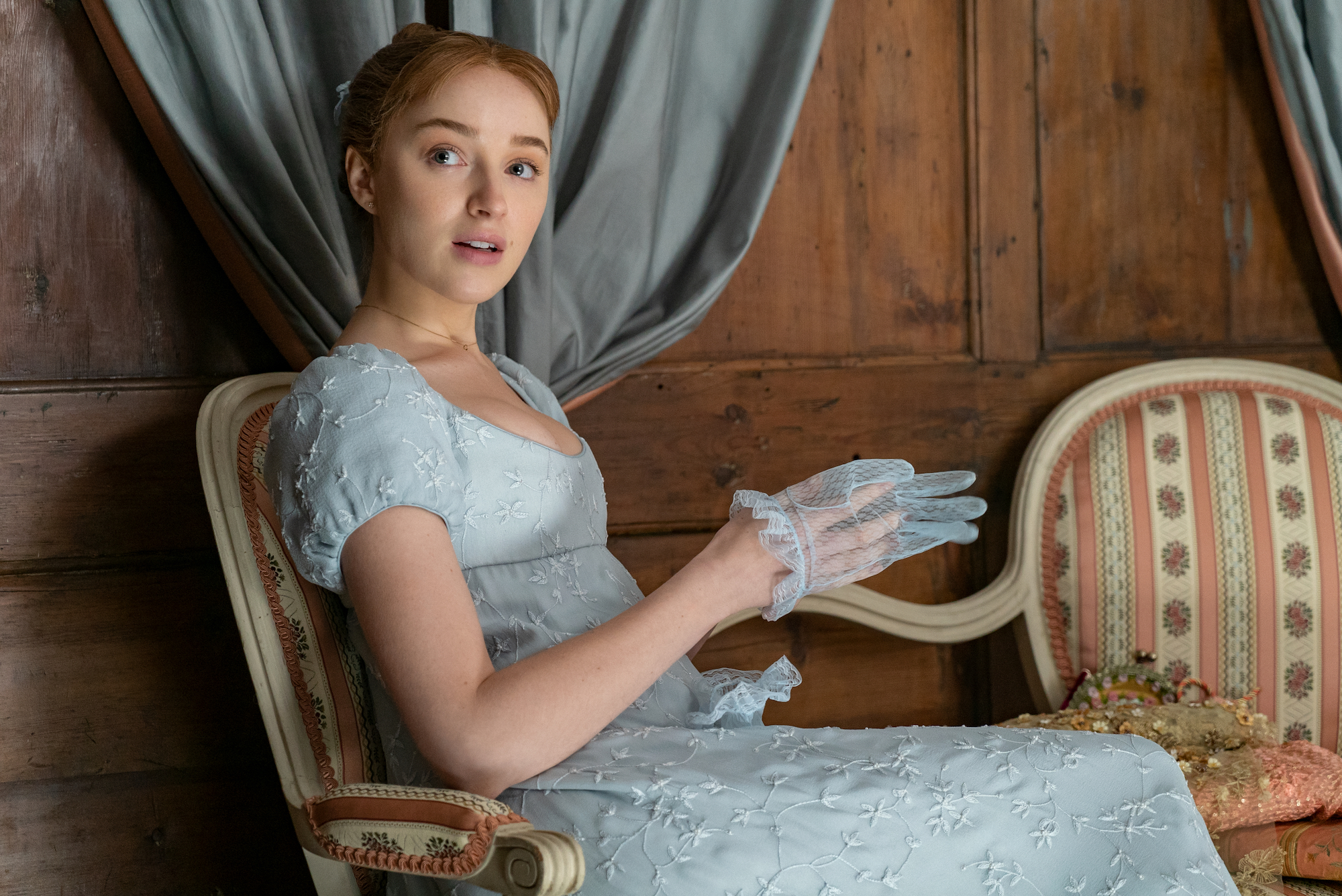 In an interview with Glamour UK on their YouTube posted on Dec. 29, Dynevor described one day on set that was her least favorite to film. And her “most difficult” to do as well. It’s after her little agreement with the Duke has reached a semi-desirable reaction and Daphne catches the attention of the Prince. She has to walk down the stairs during an event and everyone’s staring at her do so.

“Everyone turns and they look at her… and they’re watching me walk down these stairs. It was actually the most uncomfortable scene ever,” Dynevor said. “I just absolutely hated filming it, ‘cause I just didn’t feel very confident that day. I think I woke up and I wasn’t feeling in my power, in my strength that day.”

She was uncomfortable, but looking back and that doesn’t come across on the screen at all. It’s a really big moment for Daphne, and leaves the Prince very enamored. And Dynevor noticed that too, that watching it back brings a sense of “Oh, this is the opposite of how I felt on set.”

“I think that happens in life a lot where what we’re portraying on the outside is usually very different to what’s going on on the inside,” Dynevor reflected.

Dynevor was ‘nervous about leading a Netflix show,’ but Daphne taught her a thing or tough about courage

This isn’t the first show or project Dynevor has been in. She started in the Waterloo Road series in 2009 as Siobhan Mailey and has constantly been employed since. Most recently, she’s been in Younger as Clare Snatch as Lotti Mott. But this is the first time Dynevor has led a series, and it was nervewracking for her.

“I was super nervous about leading a Netflix show, and Shondaland being involved…” Dynevor told Glamour UK in the print edition of the interview as well. “It was a big deal.”

But through playing the eldest Bridgerton daughter, Dynevor did learn from her character.

“She has strength and courage to do what she thinks is right, follow her heart and not listen to anyone else’s opinion,” Dynevor said. “I also learned that I’m a better dancer than I thought I was.”

Yes, in addition to the dancing, the characters had some opportune tracks to dance to. And that included some fun, classical arrangements of modern-day songs from artists like Taylor Swift, Maroon 5, and Ariana Grande.

One day of dancing on set that stands out for Dynevor was filming the first episode. The scene involved fireworks at the end of the first debutante coming-out ball.

“It was 5am on our first week of filming, we’d been in rehearsals for six weeks, and I was really nervous about the dancing,” Dynevor said. “It was really that princess moment of, ‘Oh my goodness, this is incredible,’ and the start of such an amazing, wild journey.”