Over the first three episodes of “WandaVision,” it’s both easy to see and hard to defend why the first Disney+ series set in the Marvel Cinematic Universe needs to be a series at all.

Arguing in favor of its format, the limited series is very much about TV. Wanda Maximoff, also known as the Scarlet Witch (and played by Elizabeth Olsen), finds herself living through a version of ’50s, ’60s, and ’70s era TV sitcoms, alongside her atypical romantic partner, a synthetic android named Vision (Paul Bettany). The couple constitutes a classic pair: a homemaking housewife and an office drone husband; she frets over fitting in with the neighbors, and he stresses over a promotion being dangled at work. Early episodes air in black-and-white, a “live” audience can be heard laughing at the rat-a-tat banter, and everything is framed in the ol’ box top’s 4:3, rather than the now-standard widescreen format.

If “WandaVision” was just this — a throwback sitcom starring Olsen and Bettany — it would be glorious, like an episodic take on “Down With Love,” relishing the beloved structures of classic TV rom-coms while updating their outdated attitudes toward gender and race. But “WandaVision” has yet to engage with nostalgia in a meaningful way, nor does it fully embrace TV’s storytelling attributes. The first MCU series may be about television, but it still plays like an overinflated movie.

That’s because “WandaVision” isn’t just a sitcom; it’s the launch of MCU Phase Four and remains very much tied to executive producer Kevin Feige’s master plan. Knowing fans are well aware of this, the show never even sets up its peculiar premise. Once the Marvel Studios’ logo fades from bright red to shades of gray, there’s no mention of how two superheroes last seen fighting to save the world in “Avengers: Endgame” ended up playing decades-old versions of themselves in a time-hopping TV show, and each half-hour plays out its episodic plot to a satisfying resolution. Wanda and Vision have to impress his boss at a dinner party. Then there’s a talent show to put on and, well, there’s more, but I won’t spoil anything here. 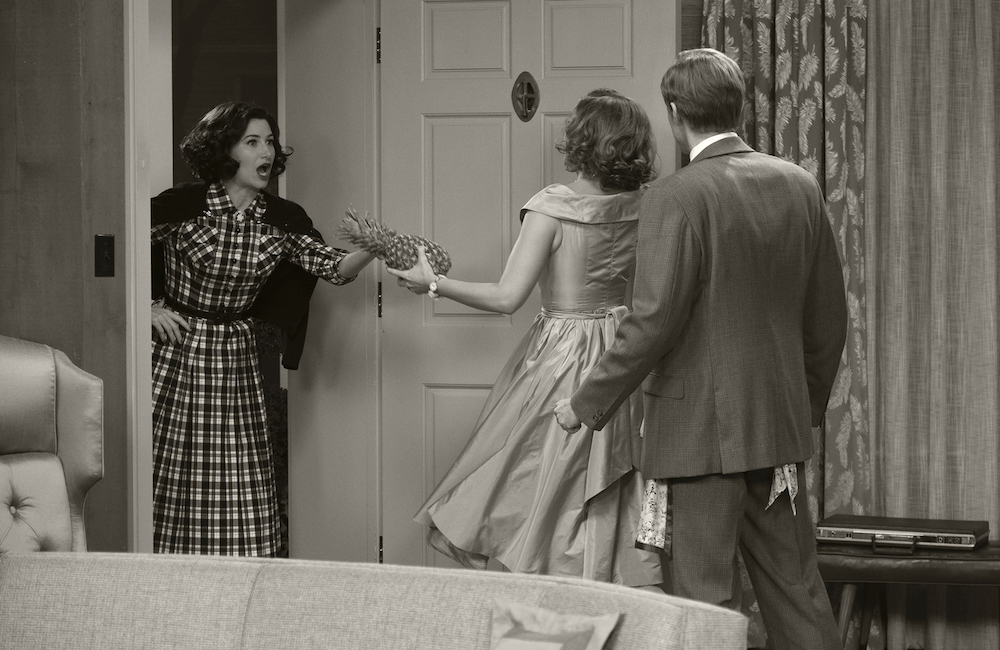 Still, lurking within the familiar pleasures of yesteryear’s TV comedies is a nagging mystery as to what the heck is going on here. Why are they here? What’s going on? Wasn’t Vision destroyed? That first question comes up, almost verbatim, in the premiere, but after three episodes, “WandaVision” has barely moved toward answering it. Each entry ends with the same general teases and offers a frustratingly familiar drip of opaque information. Half the show is asking you to lay back on the sofa and enjoy some TV, while the other half is clawing at the basement door, screaming to be heard. Quickly, the screaming can’t be ignored, and “WandaVision’s” silly, charming comedy feels too much like a distraction.

Encouraging the distraction is a heap-ton of craft accomplishments and deeply enjoyable performances. Each episode gets its own special version of opening credits paying homage to various era-appropriate programs (“Brady Bunch” for the win), but they’re laced with theme music (written by Kristen Anderson-Lopez and Robert Lopez, and overseen by Christophe Beck) that’s just the right shade of creepy. Effects work by Tara DeMarco (and her team) are just the right blend of throwback cartoon-y and reminiscent of the magic we saw in previous MCU installments. Tim Roche and Nona Khodai’s editing keeps things moving at a tight quip, while creator, writer, and executive producer Jac Schaeffer shows a gift for connective, quippy dialogue and fully utilizing her skillful cast. 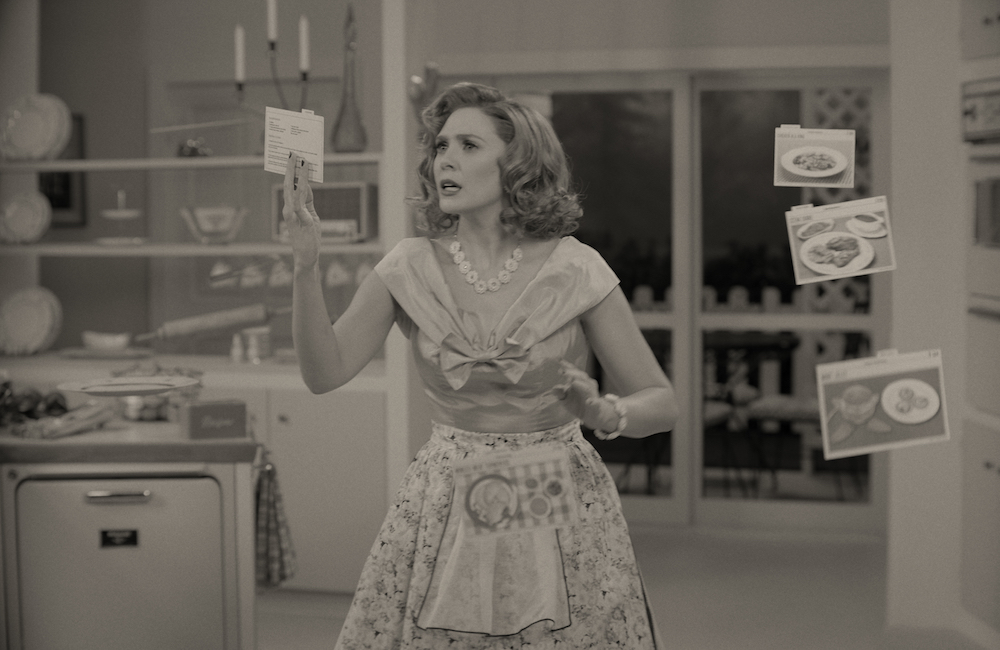 There’s a case to be made for any one of the main three cast members as MVP, though their unified excellence is essential to “WandaVision” running smoothly. Olsen and Bettany create a natural rhythm and play off each other’s zany expressions to increasingly delightful extremes, while Kathryn Hahn, as the overly welcoming neighbor Agnes, remains the show’s ace in the hole. Bubbly, sassy, and surprisingly raunchy, Hahn is so good you might be actively angry she’s not around more (especially in an Episode 3 arc tailor-made for her character and in desperate need of her energy). As the sitcom structure cedes ground to the overarching mystery, the weight put on these actors increases; they have to make each premise zippy and amusing, even when it’s clearly not what really matters to these characters.

Maybe the sitcom side of “WandaVision” will actually matter. Maybe the dinner party, the talent show, and Episode 3’s own seemingly dismissible main event will prove integral to the season’s second half. Even less likely: Maybe the Marvel bosses will see how much fun can be had when you half-commit to a unique idea and decide to fully commit to it instead. (Wouldn’t it be nice to have five seasons of the first ’70s-era superhero family sitcom instead of one season spent introducing the MCU’s next “phase”?) But for now, the TV side of “WandaVision” reads as an indulgent rationale to craft empty tributes to nostalgia while extending a two-hour movie into a six-hour limited series.

That may be all subscribers are looking for, considering both how entertaining “WandaVision” can be from moment to moment and how successful Marvel has been in rejiggering its action movie template into multiple mega-franchises. But issues of fan service and bloat have been nagging problems for past Marvel TV attempts (see: the Netflix saga) as well as other Disney properties like “Star Wars.” So no matter how much people claim “WandaVision” is like nothing the company has done before, for better or worse, it’s more of the same.

“WandaVision” premieres its first two episodes Friday, January 15 on Disney+. New episodes will debut every Friday over its nine-episode run.