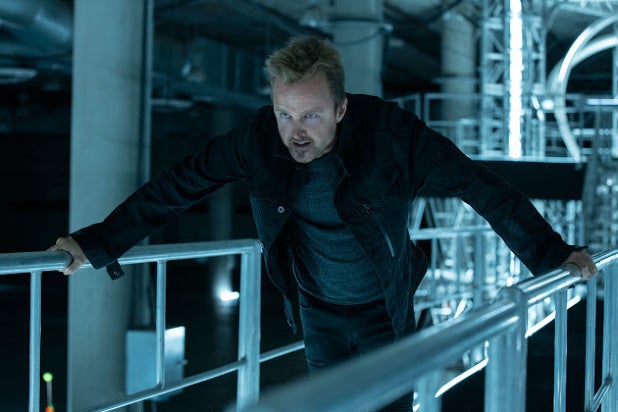 Okay, so we’re close to the end of “Westworld” season 3 now, with only the finale left to go next week. And, not surprisingly, that meant that this week’s episode was chock full of new developments. It’s a lot to process, and it took me a few viewings to get everything straight (mostly). So let’s dig into all this crazy stuff that happened and what it all might mean.

We’re gonna take it all piecemeal instead of just directly recapping everything in chronological order, just for the sake of everyone’s sanity. We’ll start with Caleb (Aaron Paul), just because he gets the biggest revelations and kinda binds all the other stuff together.

So perhaps the largest twist this week was the news that Dolores’s plan for global revolution does not, apparently, involve Dolores leading that revolution. It looks instead like Dolores (Evan Rachel Wood) has been setting up Caleb to be the leader, with this season basically being his origin story.

So the two of them head to Sonora, Mexico, where Incite’s secret reconditioning facility is. Or was. This is an old facility, not currently in use aside from housing the AI Solomon and a bunch of “outliers” who have been put in stasis pods of some sort. Incite still does reconditioning in the present, but at a different facility — the one that we see William (Ed Harris) at this week.

So Dolores clears the place of Incite’s guards and they have a chat with Solomon. And we learn that Caleb was one of these outliers — one who the “reconditioning therapy” actually worked on. Solomon says it doesn’t work for 90% of subjects, and that 90% are the folks on ice.

Over the course of the episode of “Westworld,” we learn about Caleb’s true past. So way back in the day, Caleb was in the military with his pal Francis (Scott “Kid Cudi” Mescudi), doing ops in Crimea during the Russian Civil War. They basically track bad guys so that their overlords can drone bomb them from space. But things take a bad turn, and the bad guys are doing the same thing to Caleb’s team. They all die, except for Caleb and Francis, who get shipped home and discharged.

But instead of their literal homes, they actually end up in the Sonora facility and get reconditioned. And then they’re set loose as mercenaries, essentially, making a living using the crimes app that we saw in the season 3 premiere. That app, Solomon says, was specifically designed to be used by reconditioned outliers in order to “regulate criminality.” Just another method for Serac to control everything.

But one day, Caleb and Francis capture a guy for a job, but are left hanging by whoever was supposed to come pick the guy up. Caleb takes the tape off this guy’s mouth, and he starts telling them what’s up — that the app and the meds they take are just a system of control and that he himself is just like Caleb. This guy knows a lot about the System, including the Sonora facility and the sorts of tricks they use for controlling these reconditioned folks.

When Francis is out of earshot, the guy tells Caleb that the bad guys are probably using this moment as an opportunity to clear either Francis or Caleb off the board by offering each of them money to kill the other. This turns out to be correct — Francis got an offer to kill Caleb, but Caleb ended up killing Francis in self-defense. And the guy who knows too much is killed by a stray bullet.

After all that, Caleb is sent back to reconditioning and set free again. But on some subconscious level I think he remembered the truth. Remember how he said a few times in the premiere that he doesn’t do “personals”? I think that personal policy came about because he associates those sorts of jobs with that trauma he experienced, even though he may not actually remember the trauma itself.

Alternatively, they may have reconditioned him to avoid those jobs because they know that those sorts of jobs could trigger his real memories.

In any case, by the end of the episode, Caleb now remembers his true past. And he’s mad enough to get that revolution going, with a plan devised by Solomon. So let’s talk about that AI and Serac and all that stuff now.

We learned this week that Rehoboam was not the first artificial intelligence that Serac (Vincent Cassel) and his brother Jean Mi had built to help them control the world. Before Rehoboam, there was Solomon, which Dolores says got sidelined because he had some weird quirks.

“Before Rehoboam, Serac and his brother created Solomon. It had the task of trying to organize an unruly world but it ran so many projections, so many strategies, it developed some anomalies,” Dolores told Caleb. “Serac’s brother was schizophrenic. You could say Solomon inherited some of his ways of thinking.”

But it’s more than just that, I think. Later on, Dolores asks Solomon to share with them a plan that Jean Mi had asked it to create just before Serac tried to recondition him. Solomon says he would need to update the plan, because so many of the “prime movers” in the plan were either dead or on ice. Dolores approves, because she sees this plan as necessary for the revolution.

Whatever this plan is, we can infer from these discussions that it runs directly in counter to the plan that Serac has been enacting for more than a decade — I’d go so far as to infer that this plan was the reason that Jean Mi ended up in reconditioning, even. And the reason Solomon was left to rot. So it might not just be a plan for revolution — it might be a plan for anarchy. Or apocalypse.

This is a good time to pivot over to Bernard (Jeffrey Wright), Stubbs (Luke Hemsworth) and William (Ed Harris). We don’t actually get much info from these scenes, just Bernard reinforcing things we learned elsewhere, plus a little bit of a new mystery.

So in the early scenes, we learn that someone sent them to that facility, which is in the San Francisco Bay Area, but not who. They just say “she” when referring to that person, and never explicitly clarify who that is — but my guess is the main Dolores, just because Bernard is part of her plan somehow. But that’s a mystery to ponder later.

Bernard finds the data from the tracker that Charlotte (Tessa Thompson) had put in William’s blood, and the location of the Sonora facility, and some information about Caleb, who they remember from their previous run-in with him and realize that he has greater significance than they’d previously thought.

And as they set out for Mexico to follow Dolores’s path, they chat briefly about Caleb. And Bernard says that her plan is not to destroy humanity herself, but rather to use Caleb to destroy humanity. Thus my speculation about Solomon’s plan being a potentially apocalyptic one.

Now let’s take this over to Charlotte’s one scene, which kind of ties everything together.

The episode begins with the host Musashi (Hiroyki Sanada), who is actually a copy of Dolores (Evan Rachel Wood), hanging out in a restaurant when he gets a call from one of his “siblings,” the copy of Dolores who lives in the Charlotte Hale body.

Charlotte tells Musashi that Dolores’s plan “is for us to die. But I have a new plan.” And so she told Maeve (Thandie Newton) how to find him. And Maeve sent two of her friends who she printed new bodies for last week, Clementine (Angela Sarafyan) and Hanaryo (Tao Okamoto). And they kill Musashi.

There is a question of what exactly Charlotte means when she says “her plan is for us to die.” How I see it is that each of the copies has a role to play that will eventually result in their deaths. Remember, the copy that lived in the Connells body (Tommy Flanagan) suicide bombed Incite headquarters — it’s likely that each of the copies has something like that that they must do.

And I think we saw the Dolores body’s planned death this week. She said several things during the episode that indicated she knew this trip into the desert was her last ride. And when Maeve showed up to fight her, Dolores even referred to her as the person who’s going to kill her.

After an extended battle with Maeve, which also involved Dolores’s computer-controlled sniper rifle and Maeve’s helicopter, Dolores is about to lose. She’s been stabbed in the gut and had most of her left arm blown off. But she has one last move: trigger the “military-grade EMP” in the facility and deactivate both herself and Maeve.

Now, we don’t know yet if these are permanent deaths or if they’ll be back next week — without knowing anything about the EMP device there’s no point in speculating, really. But I believe that Dolores did that intending to die there. I think this was the end of her role in the plan, and now it’s time for a very angry Caleb to go do whatever Solomon’s plan says.

As the episode ends, we see him marching out of the facility alone, and we hear an unknown voice: “Hello, Caleb, I have some instructions for you.”

Before I end this, I should note a potential wrinkle here with Dolores. She smuggled five pearls out of Westworld at the end of season 2, but we’ve only seen four of them so far: Dolores, Charlotte, Musashi and Bernard. Though we have spent the whole season thinking of the Dolores in the Dolores body as the “main” Dolores. But if her death here was the plan, it’s possible that this Dolores is actually just one of the copies, and the original has been operating from the shadows this whole time.

Or maybe there are two Doloreses in Dolores bodies, and the season finale next week will reveal they’ve been doing a “Parent Trap” kind of thing this whole time. I don’t know. I’m just saying this to remind you that there’s still one more player out there who we haven’t seen yet, as far as we know. So keep that in mind when you’re speculating about how the “Westworld” season 3 finale is gonna go.