Drama Desk Award-winning playwright turned Best Adapted Screenplay contender Samuel D. Hunter understands that certain folks may have reservations about going to see his new autofictional film “The Whale,” in which Brendan Fraser plays a 600-pound recluse attempting to reconnect with his teenage daughter. Still, he hopes people realize it is more than just a morbid obesity story.

“I totally get it,” said the screenwriter to IndieWire during breakfast in West Hollywood the morning of the Governors Awards. “They probably go in thinking of that kind of singular, watered down one-sentence description and then hopefully they have, by the end, discovered that this is a story about a lot of different things, and the fact that the character is suffering from obesity is one thing among many. There’s religious trauma, there’s family drama, there’s codependency, there’s religion.”

Hunter posits that the A24 film not being about one singular subject matter will frustrate some viewers, but he has his own gripes about dramatic writing that goes down that road storywise. “I get frustrated with plays or films that seek to have a very clear thesis or clear moral center or clear statement,” he explained. “When I’m watching something, be it in the theater or on a screen, and 90 minutes in it kind of arrives, and ‘Here’s what we’re supposed to think, and here’s what we’re supposed to—’ I just get a little frustrated because I feel like I see the author’s hand.”

Hunter added, “Nowadays everybody wants to reduce everything down to a simple, ‘This is what it means. I’ve solved it. I know what it is.’ And I just have never sought that kind of singularity in my writing. And so my plays have always generated a lot of different perspectives, a lot of different conclusions. And I’m interested in all of it. … We need to be able to embrace that complexity.”

For the 2014 MacArthur Fellow, it was “The Wrestler” that, in part, convinced him that director Darren Aronofsky was the right man to make his 2012 play into a film. “There’s a proximity of your experience with this guy that was so gorgeous and so in depth. It just felt like you were living with this guy in such an intimate way,” said Hunter of the 2008 film’s protagonist Randy “The Ram” Robinson, a role that earned Mickey Rourke a Best Actor nomination. “And that’s what the play wanted if it were to become a film. And then early on there was a big moment when [Aronofsky] said, ‘Let’s keep it in the room.’ And not a lot of directors would do that because that’s a risk, it’s a challenge.” 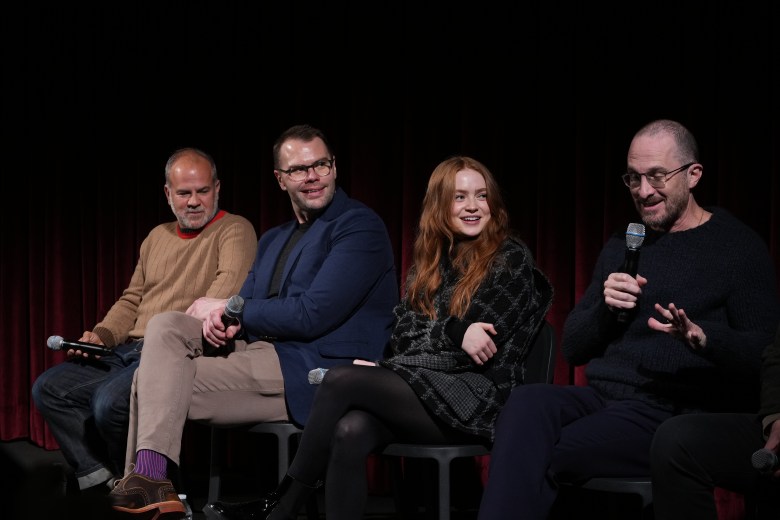 Getty Images for The Academy of

Given how personal the play is to Hunter, touching on the Idaho native’s past food addiction, his sexuality, his relationship to Christianity, being a father, etc., the playwright was a bit uncompromising about his wants in translating “The Whale” from the stage to screen. “There were a few other directors that I talked to, and no other director really wanted to tell the story in a way that I think the play just wanted to tell a story and live with the guy,” said Hunter. “Some wanted to do a pass on the script, some wanted to shift the perspective, or make it a different thing, but Darren was really the only director who [wanted me] on set the entire time. That’s a very rare experience for a screenwriter. And I don’t know what other director out there, it’s certainly not the directors that I talked to, wanted to involve me on that level.”

He considered the level of participation he had with production a screenwriter’s dream. “He welcomed me as a partner on set,” said Hunter of Aronofsky. And though the “Requiem for a Dream” director has received some criticism in the past for being exploitative of his characters, the screenwriter felt comfortable with Aronofsky’s ability to tackle sensitive subject matter, especially since the pair were in constant communication. “There wasn’t really a moment where I was worried about what his take would be just because I knew what it was,” said Hunter.

He had a similar assessment of Fraser, who has been generating Oscar buzz for Best Actor even since his casting was announced in January 2021. “I’ve seen a lot of people read this story, a lot of people be this guy [on stage], but there was just something that he authenticated about it from the jump. That was just like, ‘Oh, he knows what this story is and he knows who this guy is.’ And that’s the most important thing,” said Hunter.

Another element key to portraying “The Whale” protagonist Charlie: “You can’t have an ounce of cynicism when you’re playing this character because the moment you get dark, or the moment you lean into the frustration, it collapses. Because then it’s just a cynical story.” 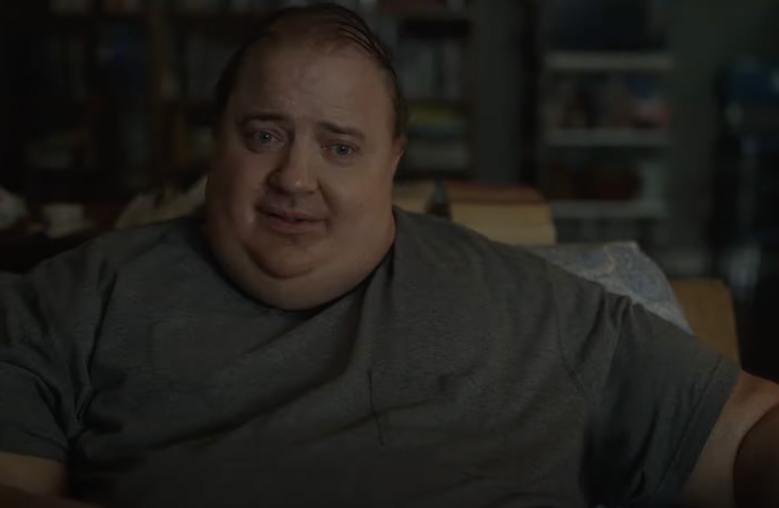 Once again, Hunter shared his distaste for another modern storytelling approach. “With ‘The Whale,’ and every play that I’ve written after that, I decided that I didn’t want to be a cynical writer and put characters in a distance,” he said. “My plays are quite earnest, and they’re vulnerable in that way to insult because that kind of earnestness and lack of cynicism is often perceived as a lack of sophistication. Whereas I find cynicism to be utterly, intellectually bankrupt, and it masquerades as sophistication. It masquerades as intelligence. It’s easy and harmful.”

Some would counter that “The Whale” could be considered harmful too for its use of a fat suit (that is in part a digital effect) to make Fraser look hundreds of pounds heavier. While that wasn’t so much an issue with the stage version (“The history of representation of obesity in theater is not as fraught as it is in film … think about ‘Falstaff’”), Hunter knows how triggering that can be for filmgoers.

“This one-note joke, putting somebody in a puffy suit in order to either deride them or make fun of them, that’s a cinematic sin that this is pushing against,” he said. “And so I really understand it when people have their guards up. Rightfully so, they should have their guards up. But I also just think that we’re doing something that is so different than that in our efforts to authenticate it, and deal with it in a way that’s about the human being.”

Hunter noted, “There’s also something about the way that [a fat suit] has been traditionally used to put the audience at a distance, to keep them over there and either laugh or poke at them or something like that. But this is the diametric opposite of that. This is meant to put you right next to this character and see him for all that he is.”

A24’s “The Whale” is now in theaters nationwide.