Netflix has a new hit on its hands with the action-comedy Red Notice. The movie is built around three massive stars. Their collective celebrity clearly drew eyeballs to the project once it premiered on the streaming service. You should take Netflix’s numbers with a grain of salt given that they self-report their data. But the claim that Red Notice was the second-most-watched movie the company has ever released suggests that Netflix is pleased.

Red Notice‘s plot sends the characters across the world in a game of cat and mouse. But the actual actors rarely went anywhere near the locations presented in the movie.

How did COVID-19 affect the production of ‘Red Notice’?

Red Notice‘s road to screening was more complicated than expected due to that pesky pandemic that’s defined the past two years, as HITC reports. Filming began in January 2020, but production halted on March 14 as the world experienced the coronavirus. The cast and crew were forced to wait for the unknowable time when it would be safe for larger groups of people to work on a film set again.

That waiting period may have affectedRed Notice‘s growing budget. Variety reports that the initial budget was pegged at $160 million but ballooned to $200 million by the end of production. Some fraction of that money must’ve been spent on paying people during that downtime, as well as figuring out ways to produce a movie during the age of social distancing.

Filming resumed in September 2020, but they didn’t have clearance to do any on-location shots at the time. So how did they make a movie? By transforming one American city into every locale the script required.

The cast and crew, including Gadot, Johnson, and Reynolds, waited until November 2020 to do any on-location shooting at the worldwide locations they planned to feature in the film.

Georgia turned into many faraway lands during filming 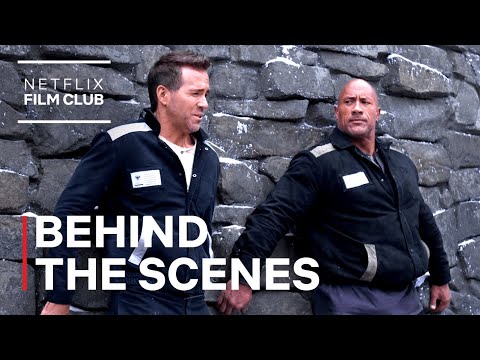 Atlanta, Georgia played host to most of Red Notice‘s scenes. The stoppage forced the filmmakers to rethink how they could complete the movie. Production built large sets that could resemble Argentina, Bali, or Cairo enough to convince audiences that they really filmed in the mausoleum of Roman emperor Hadrian.

The Wrap did an interview with Red Notice Director Rawson Marshall Thurber and Seven Bucks Production President Hiram Garcia about how they made a blockbuster in such conditions. Garcia explained:

“We built parts of Rome on a back lot in Atlanta. You name it. We did all kinds of ‘movie magic’ like that to make it work, and it’s a great testament to our crew, our production team and our production designers in terms of just being able to pivot and create these iconic sets all on stages and all on a backlot to still bring the fans to these locales.”

The shared experience of transforming empty lots into the most exotic places on Earth also included one of the movie’s stars. Gal Gadot had already made a jokey spy movie in Atlanta: the 2016 picture Keeping Up with the Joneses.

The crew did go overseas eventually, but the visual trickery continued

Red Notice is far from the first movie to use Atlanta as an imposter for other places. No American city is used more than Georgia’s capital, thanks to its natural beauty and helpful tax breaks. The city acts as Marvel’s cinematic headquarters, providing the space for the production of both its movie and television projects.

Red Notice did eventually make its way out of the states. In November, the cast and crew traveled to Rome to shoot in Italy, France, and Spain. There was still some “movie magic” involved at that point, too. The bullring shown in the movie is initially presented as being in Valencia, Spain. But the ring they used is the Plaza de Toros de Antequera in Antequera, Spain.