The sweeping romance returns. A staple of the 1950s and ’60s, these movies that took audiences on an epic love journey (often starring Audrey Hepburn) have been a little less common in the past few decades. But the writer and director Eugene Ashe is exploring the genre anew with “Sylvie’s Love,” arriving on Amazon Prime on Dec. 25.

Set in ’50s and ’60s New York, the movie is a callback to the Golden Age of Hollywood, but this time with Black characters taking center stage. It follows the highs and lows of a relationship between Robert (Nnamdi Asomugha), a rising jazz star, and Sylvie (Tessa Thompson), who is working her way up in television production. Ashe’s inspirations for the film, much like his own career, cover multiple artistic forms. In addition to moviemaking, Ashe is a former recording artist, an architecture student, a comedy club owner and a restaurateur.

He spoke via Zoom about how “Sylvie’s Love” was born from that wide range of interests, and cites a handful of specific inspirations. These are edited excerpts from the conversation.

From character to overall cinematic mood, music had a major influence on the direction “Sylvie’s Love” would go. Asomugha’s character, Robert, part of a jazz quartet, stemmed from the dynamic Ashe had with the members of the ’90s R&B group he was in, Funky Poets. But it was the work of the singer Nancy Wilson that was highly influential. Ashe was born and raised in New York, and two records that he grew up listening to were “The Swingin’s Mutual” with the George Shearing Quintet and “Nancy Wilson/Cannonball Adderley.” He said he would add certain songs into the screenplay, like “The Nearness of You,” and his writing would be guided by them. 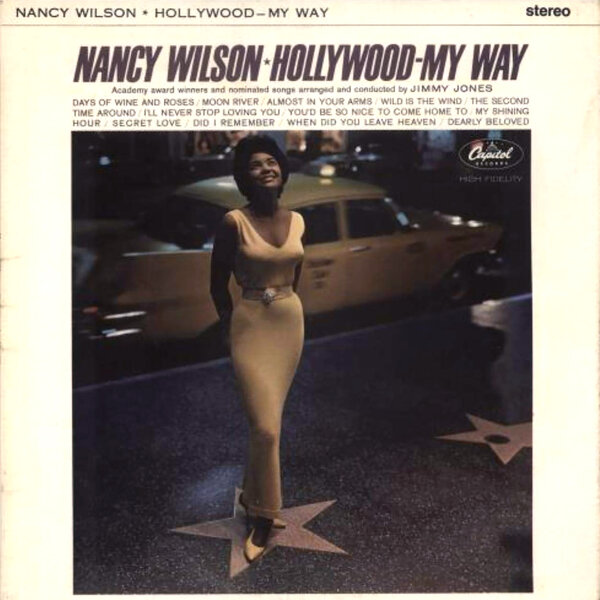 “I looked at the cover of Nancy Wilson albums and they looked like how Sylvie looked in my mind,” he said. One standout is the cover for “Hollywood — My Way,” with Wilson standing on Hollywood Boulevard, bathed in the glow of city lights. He showed it to his cinematographer, Declan Quinn, and his chief lighting technician, Christian Epps, and told them, “That’s the light we’re going for.”

Images like that brought a sense of nostalgia to Ashe, because they showcased a kind of “crispness to the night,” he said. “There’s a crackle when people are dressed up to see a show and holding a clutch and have perfume on,” he added. “I remember my parents getting dressed up to do that and thinking, I want to go where they’re going because they smell great and look great.”

Photography was significant to how Ashe wanted to capture the movie’s spirit. “I have a lot of old family photos of Black folks who look how Sylvie looks,” he said, “but it was always interesting to me that I never saw them depicted in film like that.” Beyond his own family photos, he was drawn to the images of professional photographers of the time like Saul Leiter and specifically Gordon Parks, whose work was most recently paid respects on the HBO series “Lovecraft Country.” An image that has stayed with Ashe is Parks’s 1956 photograph “Department Store, Mobile, Alabama,” depicting a woman and child under a sign that says “Colored Entrance.”

“When I first met with Tessa,” he said, “I had that picture on my iPad and showed it to her. It had the whole picture with the colored entrance sign. I said to her, ‘We’ve seen this movie. I want to make this movie,’ and I zoomed in to where the sign was gone and it only focused on the woman and her child. We talked about making a movie that wasn’t framed through our adversity, but that focused on our humanity.”

Sylvie, whose relationship with Robert is complicated by the fact that she has a husband, lives a domestic life punctuated by midcentury modern style. Her family lives in New Rochelle, N.Y., and that choice, as well as the home design, was all inspired by “The Dick Van Dyke Show.” On that show, Rob and Laura Petrie also live in New Rochelle. “I grew up watching reruns of it and I thought that Mary Tyler Moore was so beautiful,” he said. “When Tessa is vacuuming in Capri pants, she’s giving you all kinds of Laura Petrie.” Ashe found color stills from the set of the show and shared them with his production designer, Mayne Berke, to recreate the feel.

Harold Flender’s novel focuses on the relationship that starts up in Paris between a Black musician and a visiting teacher. But the film gives those characters, played by Sidney Poitier and Diahann Carroll, the B plot, while adding two white characters, played by Paul Newman and Joanne Woodward, to forward the A plot.

“I was wondering what would happen if that movie was made with the Black characters, closer to the original book,” he said. One scene in his film is a homage to “Paris Blues,” where Sylvie sees Robert play for the first time and falls in love with him on the spot. The earlier movie has a scene where Carroll and Woodward come to see the musicians play. Ashe set up the shots similarly for his scene, but said he pushed it a bit further. “I drop out some of the other instruments and just focus on him playing,” he said. “So it becomes like this hypnotic thing, where everyone disappears and it’s just the two of them.”

A sequence where Sylvie is hanging out on the rooftop with Robert is a tribute to the 1976 film “Sparkle,” about a 1950s singing group of sisters. While that movie also takes place in New York, both it and “Sylvie’s Love” were shot on the same Warner Bros. studio backlot in Los Angeles. Budget and scheduling constraints prevented Ashe from shooting in New York, but he said the backlot shoot actually helped to more firmly solidify the movie’s style.

“Because of the ghosts of all of the movies that were made there, you couldn’t help but make this big Hollywood love story,” he said.

“I think I envisioned originally a more intimate film that was a little more gritty and independent-looking,” Ashe added. “And then when I got on those backlots, I was like, you know, I just want to make this sweeping romance. A lot of that was dictated by being in Hollywood. It made me feel like I was making a movie in 1962.”