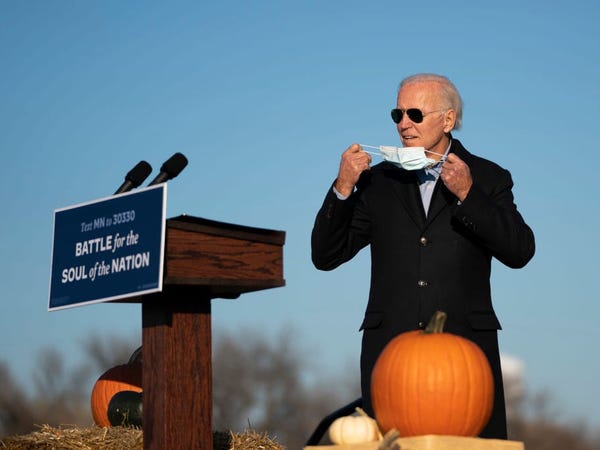 An edited video that made presidential candidate Joe Biden appear to greet the wrong state at a campaign rally went viral on Twitter over the weekend and continues to spread among conservatives, one day before the election.

Twitter users sharing the video falsely accused the Democratic presidential candidate of forgetting which state he was visiting.

The real version of the video, captured by C-Span, showed Biden greeting attendees at a campaign rally in St. Paul, Minnesota, on Friday, with two signs reading "Text MN to 30330." In the doctored version, signs reading "Tampa, Florida," and "Text FL to 30330," were juxtaposed with Biden saying "Hello, Minnesota."

YouTube has removed the video for violating its guidelines, but the video continued to circulate on Twitter as of Monday morning. Twitter appended a "manipulated media" flag to tweets containing the video, but several versions of the doctored video were still available on the platform.

One version of the video brought in 1.1 million views over the weekend, Donie O'Sullivan of CNN reported. After Twitter added the "manipulated media" label on Sunday evening, that user removed the video, according to CNN.

On Sunday, the actor James Woods, who is a supporter of President Donald Trump, shared a now-deleted tweet that contained the video. Woods wrote, "Because Minnesota and Florida are so hard to tell apart in November," referencing the weather difference between the two states to highlight the severity of mixing up the two, which Biden did not do.

Another tweet posted Sunday afternoon, that remained available Monday morning, said, "Joe Biden says 'Hello Minnesota' to a crowd at a rally in Tampa Florida, with a Tampa sign right in back of him."

It was not immediately clear where the doctored video originated from. Tweets referencing the false verbal gaffe also continued to spread without the accompanying doctored video, demonstrating the reach of disinformation online.

Beyond Twitter, the fake video also circulated on Parler, the right-wing social network. On Sunday, a user shared the video, writing, "You can't make this s— up," despite the fact that someone did, in fact, make it up. That repost of the video had 74,000 views as of Monday morning.

Building off of Trump's nickname for Biden, "Sleepy Joe," the Trump campaign has also spread several pieces of misinformation related to Biden's mental fitness for office.

Just last week, the Trump campaign shared a video of Biden that falsely made the candidate appear to refer to Trump as "George." He was really referring to comedian George Lopez, who had asked Biden a question during the October 25 "I Will Vote" virtual concert.