Our live coverage of the coronavirus pandemic is free for all registered readers. Please also consider supporting our journalism with a subscription.

The day’s headlines at a glance

Good evening and thanks for reading our live coverage.

If you’re just joining us, here’s a quick recap of the day’s events.

The national blog will be back tomorrow morning. This is Sarah McPhee signing off. Thank you again and good night.

While South Australian Premier Steven Marshall delivers daily coronavirus updates from close contact isolation, his counterparts from NSW and Victoria have been catching up over Zoom.

Victorian Premier Daniel Andrews, who returned to work today after taking leave, posted a screenshot of his conversation with NSW Premier Dominic Perrottet to Twitter just a moment ago.

The pair will meet again this week for national cabinet.

Leaders, except from Western Australia, met last week and decided on major COVID-19 changes including the distribution of rapid antigen tests (RATs) to concession cardholders and allowing people to report positive RAT results without the need for a confirmation PCR test.

Immigration Minister Alex Hawke is considering whether to use his personal power under the Migration Act to cancel Novak Djokovic’s visa after a court ruled that he needs to released and is allowed to play in the Australian Open.

Federal Circuit Court judge Anthony Kelly has ordered the immediate release of the tennis world no.1 from immigration detention after overturning the federal government’s decision to cancel his visa.

But in the dying minutes of the hearing, the lawyer acting for the government, Christopher Tan, told the court that Mr Hawke will now consider whether to exercise his “personal power of cancellation” under section 133C(3). 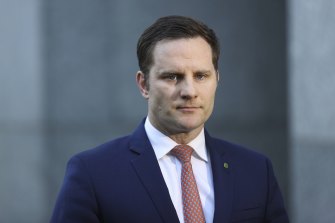 Sources confirmed that Mr Hawke now has four hours to decide whether to use the power, and it is under consideration.

If Mr Hawke uses the power, Djokovic could contest the cancellation.

However, the power is extremely broad and discretionary, and it would be more difficult to argue against it.

Djokovic could be banned from re-entering Australia for three years if the personal power of the minister is used.

Federal Circuit Court judge Anthony Kelly has ordered the immediate release of tennis world no.1 Novak Djokovic from immigration detention after overturning the federal government’s decision to cancel his visa. 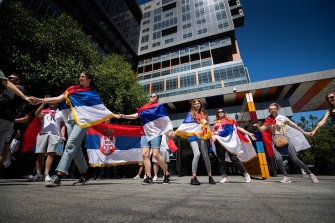 Judge Kelly told the hearing a short time ago the decision to cancel the temporary visa was to be quashed and the respondent, being the Minister for Home Affairs, to pay his costs and to take “all necessary to steps to release the applicant immediately”.

Djokovic’s lawyer Nicholas Wood, SC, confirmed the tennis star was currently physically with the legal team at a location that is still unconfirmed.

You can read the full story here and our live blog of the hearing here.

Families travel across Sydney for vaccines

Young Sydneysiders travelled across town on Monday for the opportunity to receive their first vaccine against COVID-19, after widespread delivery delays and staff shortages saw many appointments cancelled.

Alan Martin, pharmacist at Priceline Penrith Southlands, said among the 27 children he vaccinated were residents of Little Bay and Randwick, in the city’s east. 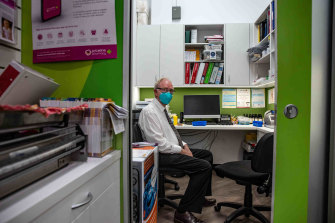 “People were willing to come a long way for it,” he said, noting most of the children were well behaved and not upset at their appointment.

“If you sit down and you talk to them, and ask them about things first, that settles them down a bit.”

Virgin Australia has cancelled almost one-in-four of its flights scheduled for January and February as the Omicron COVID-19 outbreak disrupts crew availability and dents travel demand.

The airline said it would operate reduced frequency on busy routes and temporarily suspend 10 routes from late January, as it continues to lose staff who are forced into isolation due to COVID-19 rules.

“Virgin Australia is dedicated to the communities that we serve and will resume these flights as soon as possible,” Virgin chief executive Jayne Hrdlicka said in a statement.

“Although we don’t know when this wave will pass, we do know that as we make the shift to living with COVID-19 there will continue to be changes in all our lives.

“We sincerely apologise for the inconvenience caused to any guest impacted by the changes to our flight schedule during this time.”

Premier Steven Marshall, speaking from his close contact isolation, said a man in his 90s and a woman in her 80s had died.

He said the state’s case numbers had stabilised, but there had been an increase in those hospitalised and the peak was yet to come.

“The restrictions that were put in place on December 26 are now clearly showing that we’ve been able to stop that massive escalation that other states around the country are currently experiencing,” Mr Marshall said.

There are 188 COVID-19 patients in South Australian hospitals. There are 21 people in intensive care and four of those are on ventilators.

Western Australia has recorded three new local cases of COVID-19, all in quarantine and not believed to have been infectious in the community, as the state prepares to expand its proof of vaccination policy.

Of the three local cases, one is a close contact linked to the Delta variant backpacker cluster and the other two are household contacts of a traveller from Queensland.

WA Premier Mark McGowan said the state government had supplied some GPs with paediatric Pfizer vaccine doses as the rollout began today for five- to 11-year-olds, after they “disappointingly” did not receive their supply from the federal government despite the “assurances” that were made.

“I’m advised that it’s a supply issue from the Commonwealth,” he said.

He said 13,399 bookings had been made for the childhood vaccines between tomorrow and January 24, but there were more than 5000 appointments available at state-run clinics.

Mr McGowan said the state had received about 33,000 doses, and expects this amount weekly.

He is also seeking a “fair share” of the federal government’s rapid antigen tests, which he estimates is over 1 million kits.

The state government is finalising a longer-term policy for proof of vaccination as Western Australia moves closer to easing its strict border controls, with Mr McGowan confirming “February 5 is the date”.

“I just urge everyone, please go and get vaccinated in the lead-up to that date,” he said.

He also said a new proof of vaccination mobile phone application would be launched tomorrow.

“A cyclone warning is current for large parts of the peninsula district between Weipa and Kowanyama, and also Lockhart River, down to the north of Cooktown,” Bureau of Meteorology senior meteorologist Dean Narramore said earlier today.

Cyclone Tiffany, which strengthened into a category 2 system this morning, had been expected to cross in the early to mid-afternoon, bringing damaging to destructive winds and very heavy rainfall.

“It will then quickly move across the peninsula district and then out into the Gulf of Carpentaria as we move into Tuesday, as a category 1 system,” Mr Narramore said.

“The environment is conducive to intensification on Tuesday and Wednesday.”

A cyclone watch is current for Nhulunbuy to the Northern Territory and Queensland border, including Groote Eylandt.

We will have a playback version of that press conference available for you to watch below soon.