Have our GPs stopped caring? BEL MOONEY tells of her fury at trying to get a local doctor to see her 97-year-old mother – and shares the stories of others betrayed by the service they trusted

Like countless others, I can simultaneously state that I have considerable experience of the NHS at its very best — and its worst.

I have been a supporter of the NHS all my life, with more knowledge of it than most people, particularly since giving birth in 1980 to a daughter with chronic health problems.

I have had cause to be grateful — and I am. But let it never be said that we have to take the knee in reverence to a system with many, many flaws.

Over the years, I have met good doctors and thoroughly dislikeable, arrogant ones; warm caring nurses and ones who’d be better suited to life as a concentration camp guard.

It is for that reason that I reject the cultish, sentimental semi-religion commonly known (with an accompaniment of clapping) as ‘Our NHS,’ which can make it feel like treason to complain.

Yet, after the fear and grief of the pandemic, this country has never been more conscious of our healthcare system.

We have perhaps never before realised how much we have taken for granted — like being able to make an appointment with a familiar family doctor.

Another 24 hours and I could have been dead

Afua Adom, 39, a broadcaster and writer, lives in London with her partner and nine-year-old daughter, Naima. She says: Afua Adom, 39, a broadcaster and writer, lives in London with her partner and nine-year-old daughter, Naima

Taking a shower one morning I suddenly became aware of a painful lump in my left armpit. I tried to stay calm by telling myself it wasn’t hard and that it also hurt — not classic cancer symptoms.

But the following day I also started to feel a bit feverish. When I contacted my GP on the phone he put me on antibiotics. I was happy with that. But over the next couple of days, the lump got bigger.

I spoke to a locum by phone who dismissed my concerns, telling me airily that the ‘fact it’s getting bigger and sorer means it is getting better’.

I was in so much pain that I arranged to see a private doctor who told me to get A&E.

I was shocked to learn I had a 10 cm cyst in my back and shoulder and had early signs of sepsis — a severe immune response to infection that can lead to organ damage. I needed an operation.

Three weeks on, I’m still recovering. The irony is my wound has to be dressed every day by a nurse in person. Luckily, I could pay for help, others can’t. Another 24 hours and I may not have made it.

My father died in February, and nearly 11 weeks later we moved my mother to an annexe on our farm homestead.

Since she has a cluster of health problems (hardly surprising as she turns 97), it was obviously important for her to register with our GP surgery as soon as possible.

I took her to the senior practice nurse for a once-over, was told there would be a telephone consultation with a GP, wrote to the designated GP earnestly requesting a face-to-face appointment rather than the ‘phone — and waited.

More than two weeks later the receptionist telephoned . . . to arrange a ‘phone chat’. I refused it. Which part of ‘this is a vulnerable old lady who deserves respect, wishes to meet her new doctor face-to-face and will not be able to cope with a telephone consultation’ do they not understand?

A further email from this pushy daughter did have the desired effect and an appointment was made. I should think so too. But what about those who don’t protest?

Last autumn, invited by text for my yearly flu jab and totally unable to contact the surgery by telephone, I resorted to an email which said: ‘How are we to get attention from our GP surgery? It’s heart-breaking.’

It worked. But what about those who wait for phone calls that never come and can’t use email?

Alex Kremer, 34, a birth and parenting specialist, lives in Letchworth, Herts, with her partner and their children Rufus, six, and Eden, three. She says: 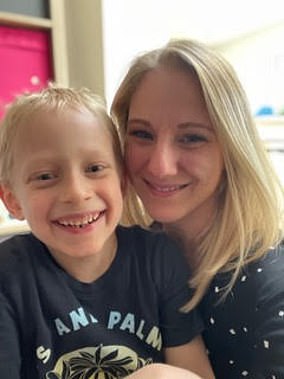 Alex Kremer, 34, a birth and parenting specialist, lives in Letchworth, Herts, with her partner and their children Rufus, six, and Eden, three. She is pictured above with son Rufus

Our son, Rufus has been allergic to peanuts, cashews and pistachio nuts since he was nine months old.

But I’ve been told by doctors that it was safe for him to try other nuts.

So when he started coughing, getting a scratchy throat and feeling lethargic after eating Brazil nuts recently, I wanted him checked out.

It was a Friday evening so I dialled 111 and two hours later got a call from a clinician and then a nurse who told me that my GP would call back on Monday. I waited ten days for that call, only to be told that a phone consultation with a GP would be held next day.

When I did speak to the GP the line was so bad, then we got cut off. I finally got a referral letter to see an allergy specialist in person.

Young children can be so nuanced. An experienced doctor seeing my son in person in the first place would have been best to judge whether he was unwell or not.

As it was, a little boy needed his doctor and his mother needed reassurance. We got neither.

By 2018, record shortages led to ever-longer waiting times and made it unlikely that a patient would see the same doctor each time. By 2019, official data revealed that fewer than three in ten GPs worked full time.

So even before the pandemic, the UK was in the middle of a GP crisis — with doctors taking early retirement, moving to the private sector or choosing to be locums.

Unbearable work pressure, rising workloads and the promise of much better pay elsewhere are common reasons given for the exodus. It was cited at one point that the NHS was haemorrhaging GPs at the rate of 400 a day.

Set those figures against pressures from an aging population and a recruitment crisis and you’re heading for a perfect storm.

Then came the pandemic — and we all knew we had to stay home and ‘Protect the NHS’. Some of us whispered blasphemously that we thought the NHS was supposed to protect us — but we obeyed. And, as of now, more than 50 times more people are dying of cancer than died of Covid and 4.95 million people are waiting for NHS treatments.

What’s more, lots of GPs seem to have got out of the tedious requirement to see patients in the surgery. Is there any reason, as we come out of lockdown, still to discourage face-to-face appointments?

You’d think not. But there have already been furious rows about the latest guidance from NHS England which promised patients the right to see a GP face-to-face.

Patients have likened their local GP surgeries to Fort Knox, and the Patients’ Association has raised concerns about the lack of face-to-face consultations.

But orders (downgraded now to guidance) to abolish mandatory telephone consultations as a first port of call provoked a backlash from GPs, and on May 20, with their unions, they passed a vote of no confidence in NHS England. How shocking to realise these professionals we have the right (as their paymasters) to rely on have been at each others’ throats.

At Dad’s age he deserves better

A few weeks ago my Dad, Jeff (far left in the picture), an 88-year-old former diplomat, developed what appeared to be tonsillitis plus painful headaches.

We wanted him to see a GP in person. His sore throat made it hard to speak, so how could he make his case on the phone? Yet when my mother, Pam, who’s 80, contacted the surgery, a call was arranged and we were told there was no scope to see a doctor in person.

Dad was told he probably had a throat infection and would need antibiotics (a test confirmed it wasn’t Covid). But the antibiotics had little effect.

Dad’s skin was turning grey and he was losing weight. Mum rang the GP in desperation, who decided Dad should get some blood tests at a local clinic. 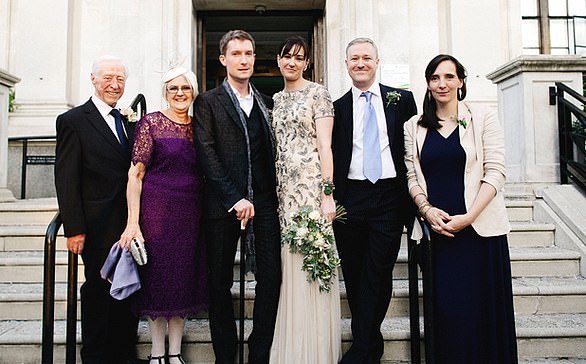 A few weeks ago my Dad, Jeff (far left in the picture), an 88-year-old former diplomat, developed what appeared to be tonsillitis plus painful headaches

The clinic rang to say dad should go to A&E as he had a very high white blood cell count. He’d developed giant cell arteritis (GCA), causing swelling in the arteries in the head and neck.

He is still in hospital. Since there’s a risk of sight loss or a stroke with GCA, it’s important to get treatment fast. Had a doctor seen Dad straight away, they might have picked up signs something was not right.

At Dad’s age, he deserves better. GPs need to let all elderly and vulnerable people like him back into the surgery. Its outrageous that at this stage of the pandemic, we are playing roulette with the health of those in desperate need.’

The letter was described as ‘insulting’ by GP Survival, a Leftist pressure group. The BMA accused health officials of being ‘tone deaf’ and suggested the guidance had been issued in reaction to media coverage ‘rather than based on the needs of the profession’.

Just hold that professional objection in mind for a moment. Then counter it with a simple question: what about the needs of the patients? NHS guidance stated video, online and telephone consultations can continue but ‘practices should respect preferences for face-to-face care unless there are good clinical reasons to the contrary’.

Why on earth is this ‘insulting’? The BMA has called for an ‘urgent meeting’ with the Health Secretary — and they demand ‘an end to directive letters’.

This fuming taxpayer wishes to know why doctors think themselves above guidance on what is right for patients. Why they shouldn’t have to read a ‘directive letter’. Why does it take a pushy person to see a doctor face to face?

Pre-pandemic, if ever I posted something on social media expressing disquiet at some aspect of the NHS I was reprimanded by people who believe it should be above criticism.

They always attribute mistakes and mistreatments to the wicked Tory government. And yet, I have seen efficient departments and not-so-good ones, sympathetic GPs and two female GPs who were brutally disengaged.

I have been hospitalised with asthma and seen the helpless old lady in the next bed crying repeatedly for help while the nurses chatting at their station ignored her. (Naturally, I intervened).

I have seen my very old father humiliated by a GP who, when I protested, told me coldly I could wait outside. A friend suffering from arthritis has just been offered an NHS physiotherapy appointment — on the telephone.

There is plenty wrong with ‘Our NHS’, we patients have every right to complain and GPs should climb down from their high horses and damn well listen.

One of my older friends warned me: ‘Don’t get old on the NHS; they just don’t care about you.’ I do not want that be true. But, sadly, I’ve heard too many stories about neglect and indifference to delude myself into wishful thinking.