Boris Johnson pledges a further £430MILLION to Ukraine and pushes for ‘Plan B’ to free grain from Russia’s clutches, with Putin ‘running out of puff’

Boris Johnson has pledged a further £430 million to Ukraine as he pushes for a ‘Plan B’ to free grain from Russia’s clutches.

Speaking on the eve of the G7 meeting in Germany, the Prime Minister confirmed the UK would back more World Bank loans to Ukraine later on in the year, bringing its total support up to £1.2 billion.

Mr Johnson, who is attending the summit on the back of a Commonwealth meeting in Rwanda, said: ‘Ukraine can win and it will win. But they need our backing to do so. Now is not the time to give up on Ukraine.’

It comes as he criticised current United Nations plans to get grain out of the war-torn country, saying they are doomed to fail because Russian President Vladimir Putin will use famine as a bargaining chip to ease sanctions.

Instead, he says a ‘Plan B’, which would involved de-mining the Black Sea, providing further weapons and offering insurance for commercial vessels trying to run the Russian blockade, is needed. 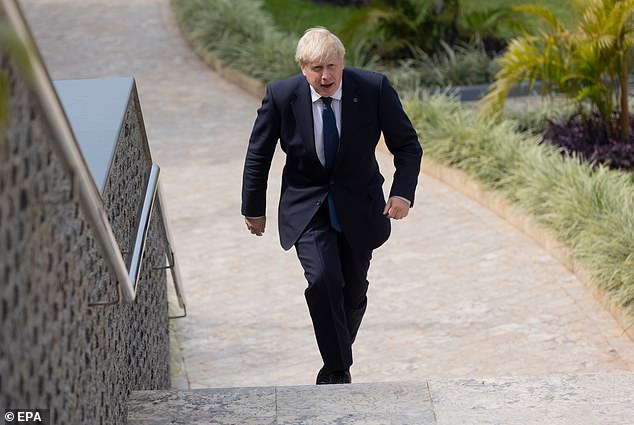 Prime Minister Boris Johnson, pictured here today in Kigali, Rwanda, has called for the UN to have a ‘Plan B’ when trying to get grain out of war-torn Ukraine 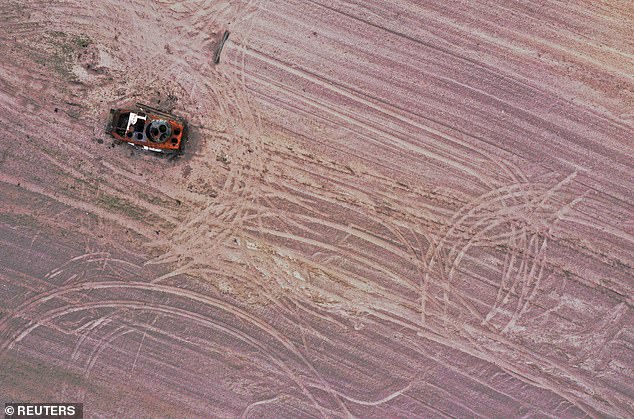 Around 23 million tonnes of grain are currently stuck behind a Russian blockade. Pictured is a military vehicle in a grain field in Ukraine’s Chernihiv region

Currently there is 23 million tonnes of grain trapped by the blockade, something that is set to cause an impending global food crisis and is increasing food prices across the world.

The UN was Turkey, which is a member of NATO, and Russia to agree a safe corridor for exports.

Mr Johnson told reporters: ‘Now the problem is that Putin is going to use that as a pretext, as a way to try and get sanctions relaxed.

‘And he is going to say I’ll let the 23 million tonnes of grain out if you’ll go easy on this, this and this.

‘I don’t think that’s a runner.

‘So we have to think about a plan B which would be to find ways of empowering the Ukrainians to control the sea lanes from the shore with various bits of kit.

‘And there are two things in particular which the UK has expertise in.

‘One is de-mining, remote de-mining, and the other is insurance of commercial vessels in contested waters and how to make it possible for people to take on that job.’

He said Britain is in talks with Ukrainian president Volodymyr Zelensky and the Turks to get an agreement. 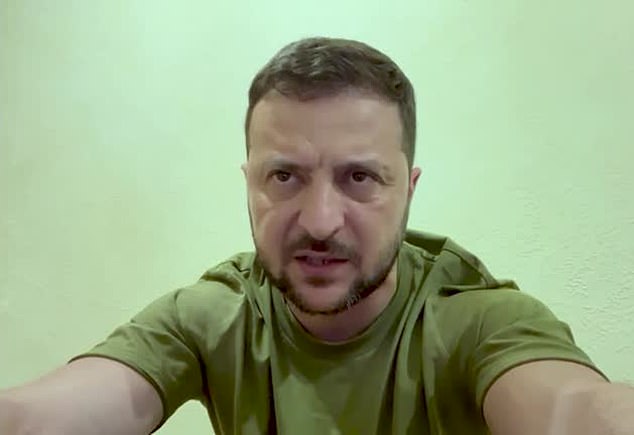 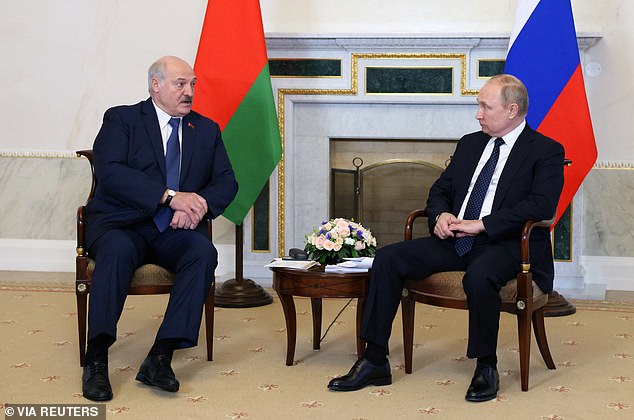 Mr Johnson added that he felt the Russian’s are ‘running out of puff’ in the ongoing war in Ukraine. Pictured is Russian president Vladimir Putin, seen here talking with Belarusian counterpart Alexander Lukashenko

‘At some stage the world is going to have to move from Plan A which is the UN plan with Russian help, which I think is probably going to be a non-starter, to a Plan B,’ he added.

Mr Johnson insisted Turkish president Recep Tayyip Erdogan ‘definitely wants the grain out’ when asked if he is too close to the Putin regime.

The Prime Minister said Ukraine is at a ‘critical point’ in the war where it appears that the Russians are ‘running out of puff’.

Mr Johnson was in Rwanda discussing the grain crisis with leaders at a Commonwealth summit and will travel on to G7 and Nato meetings in Europe.

He warned allies against becoming ‘exhausted with this thing’, arguing it would be a ‘disaster’ for the world if Mr Putin wins ground.

‘I’m going to make it today in the (leaders) retreat, but tomorrow in the G7. I think it’s just repeating that basic point that a victory for Putin is a disaster,’ Mr Johnson said.

Foreign Secretary Liz Truss was also warning against getting ‘tired’ support for Ukraine, as she warned against a peace deal that would be a ‘concession’ to Moscow.

After holding talks with Turkey in Ankara, she told reporters in Kigali that ‘we’ve only got a month to do this’.

‘My concern is that Russia is currently prevaricating,’ she said.