As we wake on New Year's Day, and finally view 2020 in the rear-view mirror, the substantial task of trying to make sense of such a calamitous year begins. While this moment hardly marks the end of the pandemic – most of 2021 is sure to be tarnished by the virus – it does offer a chance to reflect on the transformative nature of such a crippling event as a global pandemic.

While the lockdowns triggered many changes to our daily routines, none of us is yet certain how many of those changes will stick. Few students would stick their hands up for another year of remote learning, but there appears no shortage of office workers keen to continue plugging into the workplace from home. 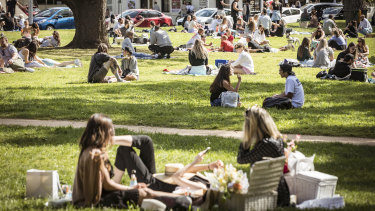 Catching up with friends in parks became a feature of Melbourne in 2020.Credit:Chris Hopkins

There are some new habits that we can predict will linger: online shopping, cashless payments, our attachment to streaming services. There are things whose importance we have been reminded of: direct human interaction, caring for our mental health and the vulnerable, and the importance of our local environments and communities. Some memories we would no doubt prefer to forget, among them those mad dashes to the supermarket for toilet paper, flour and pasta.

It was also a year when political leaders and the mechanics of government were called upon to fortify a collapsing economy and manage a health crisis on a scale not seen for a century. At a federal level, the Coalition government succeeded in getting billions of dollars into people's pockets as the jobless numbers skyrocketed and businesses shuttered. Even so, Prime Minister Scott Morrison has struggled to fully embrace Keynesian pump priming.

The JobSeeker payments, worth $565.70 a fortnight before the pandemic, were bolstered with an additional $550 fortnightly payment in late March. But this supplement was dropped back to $250 in September and then reduced to $150 on Friday. The JobKeeper program is also shrinking, even though the fresh Sydney, and now Melbourne, outbreaks make it all too clear that this crisis is far from over. Containing the virus remains a challenge, and every time it breaks out, economic fears revive.

The Age strongly supports there being no further cuts to the supplements until the vaccination program, expected to start in Australia during March, is well under way and the economic recovery can be put on a surer footing. The implications in terms of intergenerational debt will be large, but the implication of not spending could be much worse for those who lose their jobs and their businesses.

Possibly the most consequential outcome of the past year has been the development, testing and roll-out of several vaccines for COVID-19 in a matter of months, not years. This is nothing short of astonishing. While there are growing concerns about the availability of the vaccine in less wealthy nations, there is no doubt that its rapid success will save hundreds of thousands of lives.

At the start of the 21st year of the 21st century, more than just coronavirus has shaken the foundations of our society and our economy.

Australia has found itself in the eye of the storm as China openly and forcefully imposes its aggressive brand of authoritarian capitalism. Australia also increasingly finds itself out of step with global leaders wanting to put the foot down on moves to limit carbon emissions. And as local protests revealed this year, it is not immune to the growing divisions within societies along the lines of wealth, race and political belief.

But if there is one thing we should take out of 2020, it's that every time Victorians were faced with moments of despair – and there were many such moments – individuals and communities found the strength and resilience to ensure that good will and caring for each other came to the fore. So with this cautious optimism in mind, we say: "Bring on 2021, and whatever it may throw our way."

Note from the Editor

The Age’s editor, Gay Alcorn, writes an exclusive newsletter for subscribers on the week’s most important stories and issues. Sign up here to receive it every Friday.