Every modern democratic government is made up of elected officials and a bureaucracy. Victoria's state government is no different. Those brought to power by the people, from Premier Daniel Andrews down, are entrusted with overseeing and enacting the laws of the land, while government departments are responsible for implementation.

In principle, the doctrine of ministerial responsibility ensures that it is the elected officials who are accountable for all government actions. In practice, as the state hotel quarantine inquiry is making clear, the bureaucracy must also be held to account. 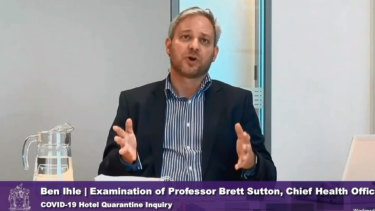 Much of the public blame for the hotel debacle has focused on the hiring of private security guards to monitor returned travellers. There is no doubt that hiring a casual workforce with poor job security who often operated across multiple workplaces was a bad call.

But there is a deeper, more systemic problem that is playing out before the inquiry. Mr Andrews highlighted the issue, probably inadvertently, even before the public hearings began. When asked who he believed was at fault in making the fateful decisions leading up to the hotel outbreaks, he came up blank.

It may have seemed an evasive answer at the time, but as the inquiry rolls on, and a parade of government officials front up to try to explain what happened, a disturbing picture emerges.

The numerous government departments, Victoria Police, the emergency management team, contracted employees and health officials involved in the operation were working within a management structure that had no clear oversight. Lines of responsibility were blurred and changed as the program evolved.

This week, the inquiry heard Chief Health Officer Brett Sutton say that just two weeks after the program was set up he believed it carried “considerable risk” because it lacked a clear leader and line of accountability to his deputy. He was not even aware that private security services were being used at the hotels until after the outbreaks.

And he was not the only one concerned. Earlier this week, the inquiry heard that a state government department withdrew all of its public servants from hotel quarantine work after the Health Department failed to address fears about health and safety.

So who was in charge? On Wednesday, Andrea Spiteri and Jason Helps, who acted as Victoria's pandemic state controllers, said Professor Sutton had "absolute control" of Victoria's pandemic response. This contradicted the evidence of the Chief Health Officer himself, who told the inquiry the day before that he was sidelined by senior Health Department officials.

The Premier ended international flights into Melbourne when it became evident that hotel quarantine was to blame for Victoria's second wave, and appointed Corrections Victoria, which oversees the state's prisons, to take over security at the hotels. But as the inquiry has shown, while using private security guards was the wrong decision, it was the lack of clear lines of responsibility and proper oversight that greatly exacerbated the problem.

The buck does stop with the Premier, and he needs to take his share of the blame for the debacle, but many others who oversaw the botched operation also need to take responsibility. Victorians need to be assured that the lessons learnt from the hotel inquiry go far deeper than the decision to remove private security guards.