Captain who ‘suffered traumatic brain injury’ after being struck by a 22lb steel pulley while on a tycoon’s £7m superyacht is suing the businessman’s company for £3.2m compensation

A sailor who says he had to give up life at sea after being struck on the head while he was onboard a tycoon’s superyacht is suing for £3.2million compensation.

Trained skipper Adam Prior was an officer in the crew of the Eleonora E, one of the world’s most elegant sailing superyachts, when he was hit in the head by a 22lb steel sail pulley during a race off the Isle of Wight in July 2015.

The £7million boat is owned through a company by retired millionaire businessman Zbynek Zak and is a replica of an early 20th century schooner, being hailed by sailing experts as an ‘incomparable’ masterpiece of design.

Mr Prior is now suing the company which owns the boat, Peras Ltd, claiming he suffered a traumatic brain injury and blaming unsafe weather conditions and lack of maintenance on the rigging for his accident.

But the company is denying all blame – as well as disputing the amount of compensation claimed – insisting that Mr Prior was ‘the author of his own misfortune’.

Mr Prior, then engineer officer, was struck by the flying mainsheet block as he crossed the deck while supervising other crew members during a regatta race, London’s High Court heard.

Ms Nelson said the accident had taken a devastating toll, adding: ‘His injuries were significant and have had a dramatic, lasting impact on his life.

‘His personality change – irritability, impulsive behaviour and temper outbursts – have also had a detrimental impact on his relationships.’

And due to his injury, he is no longer able to work on yachts, she told the court.

Mr Prior claims the block-pulley hit him after becoming stuck and then suddenly ‘releasing’, which his legal team blames on the boat owners’ ‘negligent maintenance of the yacht’.

Mr Prior claims the wire span holding the block was poorly maintained and his lawyers say it should have been replaced long before he came to grief.

The boat’s skipper, David Martirano, told the court he had approached Mr Zak ‘more than once’ about replacing the span, but it came to nothing.

‘Mr Zak’s reasons for not replacing the span was that it would cost 1500 euros,’ said the captain. ‘He said it doesn’t need to be done, you only need to do it once every 15 years.’

But Nigel Cooper KC – barrister for Peras Ltd – disputed that any such safety concerns were relayed to the boat’s owner.

‘If you had said to Mr Zak that it was a matter of safety of the yacht and the crew on board that the span required replacement and only cost 1,500 euros, he would have said “go ahead”,’ insisted the barrister. 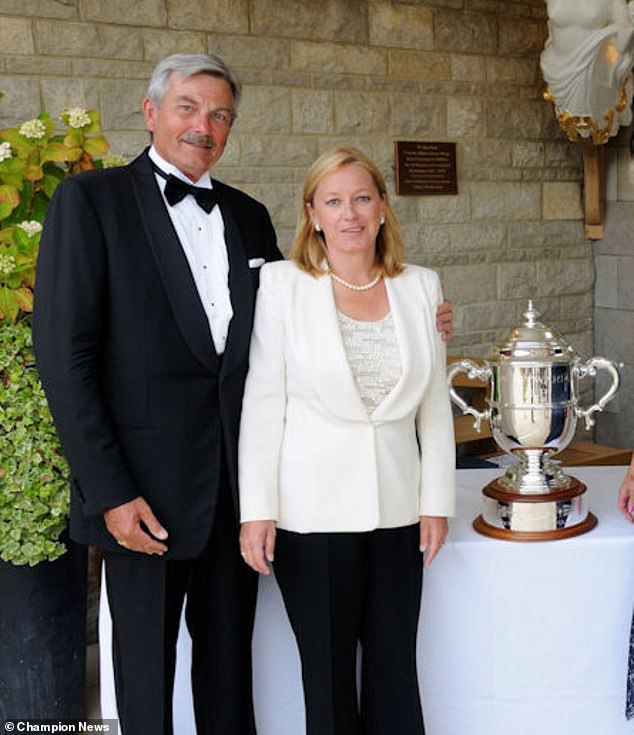 Mr Zak and his wife Susanne (pictured) travelled the world on the boat. Prior wants to sue the company through which Mr Zak owns the boat, Peras Ltd, for £3.2m

He told the judge Mr Prior was ‘the author of his own misfortune as he attempted to cross an area of the deck that is known to be particularly dangerous and should be avoided.

‘In short, Mr Prior’s injuries were an unfortunate accident caused by his own acts and omissions, for which he is solely responsible,’ he added.

Mr Prior also says the Eleonora E should not have been racing on the day of his accident, with heavy winds of up to 30 knots battering the boat.

Adam Prior told the judge from the witness box: ‘I said that I didn’t want to sail that day in those conditions but I had no choice’.

But defence barrister, Nigel Cooper, denied the winds made racing hazardous, telling the court: ‘We deny that the wind was gusting up to 30 knots at the yacht’s location at the time of the accident.’

‘His injuries were the result of an accident in circumstances where Mr Prior, a very experienced sailor, chose to cross the yacht by a route which he knew to be dangerous to a place where he did not need to go,’ he concluded.

Eleonora E was launched in 2000 as a replica of famous transatlantic schooner Westward – capable of holding her own in intensive competitive racing as well as offering luxury accommodation.

Mr Zak and his wife had jaunted around the globe in the 170-foot vessel, complete with mahogany-panelled dining saloon, accommodation for nine guests and catering by a top French chef.

The judge has now reserved his judgment in the case to be delivered at a later date.